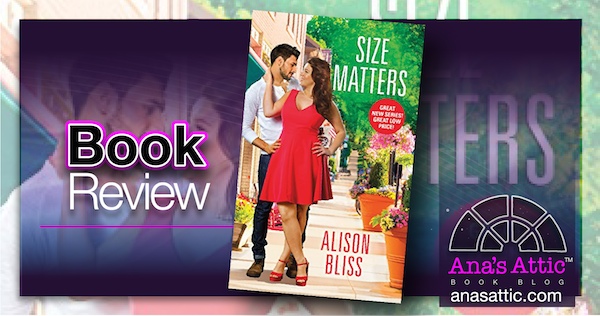 Before I begin this review, I want to give a little background. I am plus-sized and miserable about it. This post here will tell you a little more about how much I hate my body. I wasn’t heavy growing up. My mom and sisters are both gorgeous and thin. My mom brings up my weight constantly, not to insult me, but because she cares, but it gives me a complex anyway. Last year I was away for a weekend with one of my bookish friends, and I totally noticed that all I talked about was my weight. I am obsessively self-conscious. I only wear black and I hide behind long hair. So I want you to understand going in that Leah from Size Matters by Alison Bliss was one of the most relatable characters I have ever encountered.

Leah is me. She may be a little too negative and down on herself for a few of you, but I totally got her. I even thought her negative self-talk was a bit much sometimes, but then realized I do the exact same thing. Leah and her best friend Valerie (the heroine in the next book) are both bigger girls, but they have totally different attitudes. Valerie dresses up, flaunts her curves and picks up men right and left. Leah hides out and avoids any chance of rejection, especially after her last boyfriend left her after she didn’t shed the pounds he thought she should. Until one night Valerie forces her to go out and tells her to pick a guy.

“Hippy brunettes with body image issues and smudged eyeliner don’t get the luxury of just pick one.”
“Oh, shut up,” Valerie said, rolling her eyes. “Your eyeliner looks fine.”
Yep, that about sums it up. My eyeliner is the only thing that looks decent on me tonight.

Sam and his friend Max are at the same bar. Sam just got out of a bad relationship with a crazy chick and he is swearing off women for a while. So when Max hooks up with Valerie, Sam is left with Leah, who is totally his type. So much, that he has to try not to look directly at her or he wouldn’t be able to stop himself from taking her home.

He had never been fond of the anorexic, always-on-a-diet type. And he sure the hell didn’t want to sleep with a bag of bones either. Sam appreciated the sensual rounded curves of a feminine body, a girl with some meat on her hips. The soft contours of a woman’s thighs, large shapely breasts, and a gently rounded ass he could grab on to with his hands—that was what he loved about a womanly figure. All the things Leah possessed.

But of course, he swore off women so he had to hold himself back big-time. And his holding back and doing some assholish stuff by accident totally made Leah think he was blowing her off because of her weight, and she proceeded to get hammered.

The next day, she couldn’t understand how he could have carried her in.

Leah is a baker. She was also hired to bake a cake for her ex’s wedding that day, but when she had car problems, Sam offered to help her out. And when he saw she was in an awkward position with her ex and she was putting herself down again, he popped in to save the day by kissing her and saying he was her fiancee.

Here is where the fun began. Leah’s mom found out, and when Sam heard her mom putting her down again he decided to keep up the fake engagement ruse without even asking her. Leah was set to go away with the whole family though, and now Sam was invited! The fake engagement was getting out of hand, and they had to find a way to break up over the weekend.

I was cracking up at some of the antics he pulled to make her family hate him and tell her to dump him. The interactions between the couple were adorable and I loved how he defended her, was obsessed with her sweets and she tried to save him with a pillow. I had a great time watching them get closer, but Sam had a nasty habit of putting his foot in his mouth, and she had a nasty habit of taking everything wrong.

But when they got it right, it was HOT and it was sweet. 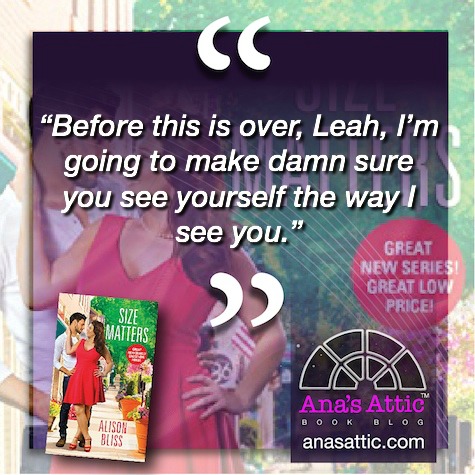 Leah was one of the most relatable heroines ever. She is plus-sized and miserable in her own skin, always putting herself down because her mom and ex gave her a complex. Sam was sweet and sexy despite putting his foot in his mouth and hurting her a few too many times. I laughed out loud a lot during Size Matters, and loved the banter and snarky fun. I was rooting and cheering for this couple to get over themselves and get together and I had a blast the whole time. If this was written in first person, it would have been 5 stars for me, but you can bet I will pick up Valerie’s book, because I expect that will be crazy funny without the self-loathing that may turn some of you off. 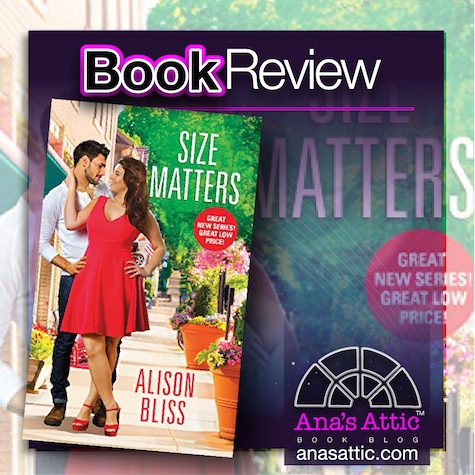