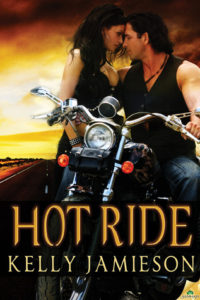 Warning: Features a badass biker hero and kickass heroine who go at it undercover—and under the covers.

Hello? You had me badass biker hero! The book opens with a meeting between the ATF and the DEA discussing adding a female agent to the team investigating an OMG (Outlaw Motorcycle Gang) Sera Manning is a DEA agent who has worked her whole career to get into this undercover job (her first) with the Death Angels, a motorcycle gang based outside of L.A.. When she is brought into the gang’s bar-hangout, she immediately sees a big gorgeous guy, and decides she might as well hook up with the hottest guy there.

The sexual tension is immediate. She is already gushing (literally) over ‘Tommy’, and he is hot for her as well…until she scores some drugs. ‘Tommy’ is really deep undercover ATF agent Ryan Thomas, and when he realizes ‘Sara’ is actually Sera Manning the DEA agent, he is surprised, and at first refuses to work with someone so inexperienced. But he needs a girlfriend for his cover, and she had already fit the bill so nicely…

So they are paired up. Partners. With surveillance on them at all times, and Ryan’s other partner always around. Getting personally involved with someone on a case is obviously not a good thing, so they try to keep their hands off each other in private, while they are a couple in public. But they can’t.

She had no idea why this man dominating her, inflicting sweet pain on her like that, doing things to her that no man ever had, thrilled her right to her very essence.

And then she knew why.

He wasn’t dominating her in the sense that he wanted to control everything she did. He believed in her, which no one ever had. He respected her abilities and treated her like his equal. What they did in bed had nothing to do with that–and everything to do with it. It was all about the pleasure she got from the things he did. He knew what she liked, what she wanted, what she needed and he gave it to her. She trusted him with her life, in any situation, including sex.

She was in love with him.

I had a bit of a hard time getting into the book. I received an advanced copy with a lot of formatting issues, so I must say, that may be partly, or even completely to blame. Because at around 35% in, I asked for another copy, then I didn’t put it down until I finished.

Not only did I enjoy watching the relationship develop, but the case was exciting as hell. It is easy to see how caught up in undercover work these agents can get, and I think it was portrayed very well.

Rating: 4 stars 4 for heat (great sex, but not an over the top amount)

I really ended up enjoying this story despite my difficulty at the beginning. Again, the formatting of my copy may have been a big part of the problem. A problem you won’t have. The book was 313 pages, and I never moved from around page 100 on, which is when I got the new copy, but also when the story really started to pick up. This is romantic suspense, and I enjoyed having a little more of the suspense to go with a HAWT ROMANCE.

On October 1st, I will be the last stop on Kelly Jamieson’s Hot Ride blog tour with for this book. She will be giving away a Kindle as well as two motorcycle thumb drives with the book of your choice. You can enter now by clicking the rafflecopter link below, or wait until she is here on the blog doing a guest post!