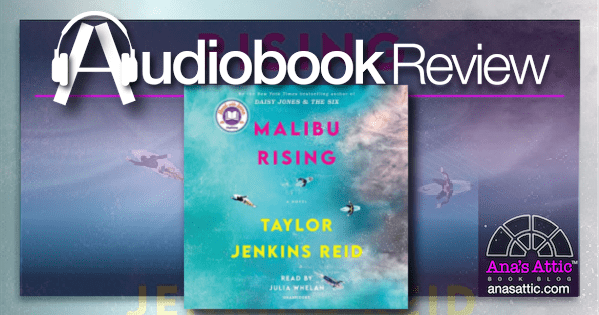 After reading and Loving Daisy Jones and the Six and The Seven Husbands of Evelyn Hugo, I heard there was some character crossovers to Malibu Rising, so I grabbed it and jumped back into the past with Taylor Jenkins Reid again.

Malibu Rising is another epic Taylor Jenkins Reid tale that spans years. We start in the 1980s where Nina Riva and her siblings are throwing a huge party at her Malibu Beach House. From there, the story flashes back to the fifties when Mick Riva, the now-famous singer, was just starting out. It tells the story of how he met and married his young wife June, then left her with 4 kids and no money while he skyrocketed to fame.

Nina Riva, the oldest of the four, was the main focus of the book, as she tries to support her siblings and hold her family together. Surfing is a huge part of this story (I don’t want to give too much away) and I really loved reading about when the kids all discovered a surfboard.

I got sucked in by the story, especially the first half of the book with Mick and June, but I always felt as though I couldn’t really get in there and FEEL with them. I guess it’s the third-person aspect, but I feel like someone else is telling me the story of this family instead of me experiencing it all with them.

The second half of the story, especially the party, kind of lost me a bit. Suddenly we were jumping into random people’s heads. I get that she was trying to do something unique here, but it just didn’t work for me. That being said, I loved the four siblings and was rooting for them all along.

Julia Whelan is always fabulous, but all the different POVs were still annoying.

I have such mixed feelings about Malibu Rising. I enjoyed the story, but felt like I was held back a little. I think it’s mostly because it’s third person, but it’s the writing style in this novel as well. I loved the flashback and seeing how this family grew and survived, but the “current” (1980s) scenes, not as much. It’s a very unique story, and it will stick out in my memory as such, but it didn’t live up to the other books I have read from Taylor Jenkins Reid.

Though not technically a series, these books all cross over to each other in small ways. You don’t have to read them in order, but Evelyn’s 3rd husband crosses over into all of them as well as some other characters. (Evidence of the Affair is a short story with a quick mention.) 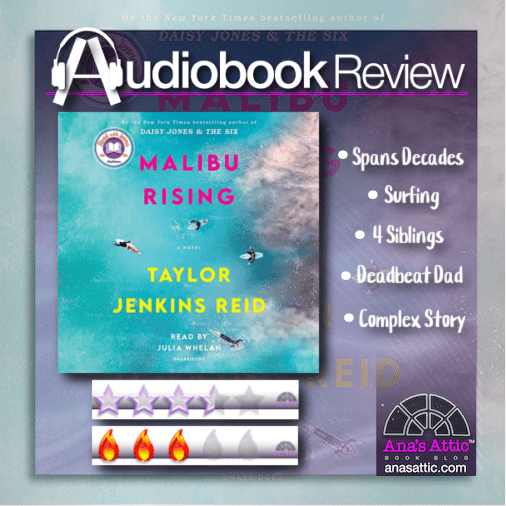