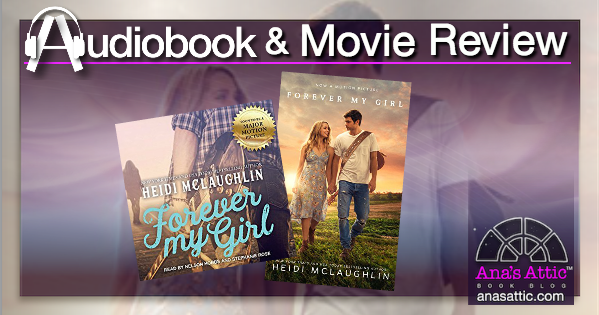 Forever My Girl by Heidi McLaughlin

I reviewed the audiobook for Forever My Girl  by Heidi McLaughlin back in 2016, and while I really liked the story, it was the first time I reviewed an audiobook where I had a difficulty separating the narration from the story. I had a really hard time with the female narrator and her voice made me feel sad and melancholy. Luckily Heidi realized that this was a problem and had it re-recorded with new narrators and WHAT A DIFFERENCE! While I liked the story despite the narrators the first time, this time I just plain loved it.

But here is the thing. I wish I re-listened AFTER seeing the movie instead of right before. Because the movie was adorable, but I had a bit of a hard time enjoying it without picking out all the changes. And there was A LOT. Let me do the audiobook review first, then I will talk about the movie. (Most of this review is from my original, just updated to take out me complaining about the narration)

Josie and Liam were high school sweethearts. He was the football star and she was the cheerleader. Their whole lives were about football. His family life was about football. After a time in college, Liam realized he loved music, not football, and left everything in his life to pursue music. Including the love of his life.

“I thought for sure we’d spend forever together. I thought our love was one of a kind. I would almost be okay if he had met someone else and fallen in love, but he didn’t. He just left.”

Ten years later, Liam, now a famous rock star, is back in town for his high school best friend’s funeral. Mason stayed with his high school sweetheart and left behind 2 beautiful little girls and a loving wife when he died. Seeing the hole Mason left had me crying even though he was already gone before the book begins.

Liam never stopped loving JoJo. She was always the one who got away, and he realized over the years that he will never love like that again. He was scared to go to the funeral, yet so drawn to Josie he couldn’t help himself. But she is engaged to a good guy (or he seemed good, but I never liked him). JoJo has secrets now, and Liam wants answers.

“You don’t get to come in here and demand answers, Liam. You’ve been off playing rock star. You’re the famous Liam Paige. You left this,” I spread my around and point to myself. “You left me. There’s no room for you here.”

Josie’s heart didn’t agree with her words, and she never thought the words they had spoken could ever happen again.

Wow, what a difference good narration makes! It was excellent and enhanced the book.

The Down & Dirty for the Book:

Liam didn’t have a good enough reason for leaving the love of his life behind and pursuing his career in music. I still don’t get why he didn’t tell her the truth, and that tainted my feelings toward him a bit. I did like that the story took a while to evolve, and that Liam was a very patient man. The story is well written, angsty but but sweet, and I love kids in books. While it isn’t the most unique story, It was still a super enjoyable listen.

I have to start by saying how exciting it is to see ‘one of our own’ get a movie on the big screen, but I am disgusted and so disappointed with how they marketed this film. Poor Heidi was never even mentioned in the ads, and they made it seem like it was a Nicholas Sparks book!

There were a LOT of changes. Some I didn’t mind, but some took away the feel of the book. I LOVED the little girl who played their daughter, she totally stole the show (was a son in the book, but she was amazing and it changed nothing). I was also fine with Liam being Country in the movie instead of Rock. In fact, it kind of fit the story even better.

In the book, I didn’t think he had a good enough reason to leave. But the movie had even less of a reason! He couldn’t even come up with one when asked. The expectation everyone had for him to be a football star when he wanted music was too much in the book, making him leave. But in the movie, football was barely a blip on the radar.

He really showed his good side, helping his best friend’s widow in the book, but they show none of that in the movie. He had to work HARD to get her back in the book, especially because she is with someone else, and in the movie he actually leaves her at the altar (no spoiler, it’s in the preview), so you’d think she would be even angrier? Nope, she just took him back WAAAAAY too easy. I actually yelled at the screen!

I am usually OK with all the changes that happen from book to movie. I understand it’s part of the process, and you have to shave a 10 hour book into less than 2. I think if it wasn’t fresh in my head, a lot of this wouldn’t bother me, or I wouldn’t have remembered.

Because it was a good movie! It was like a way upgraded Hallmark movie in that it was wholesome, romantic, made me swoon, laugh, and get emotional. I wish I could go back and unread the book first because I think I would love it SO MUCH MORE if I didn’t remember the details, then went back and read or listened after.

It had a great soundtrack, even for this non-country fan, and when Heidi’s name came on the screen, we all hooted and hollared!

I am so happy to see an indie book optioned for the big screen. I will always support this practice! I love my books made to movies, and I know the book is always better, so my expectations weren’t that high. But even with all the changes, Forever My Girl exceeded my expectations, and I still loved it. Just buy the book and read it after so you can see what it could have been.

Rating for the Movie (trying to separate the book): 4 stars

Purchase the Forever My Girl Soundtrack 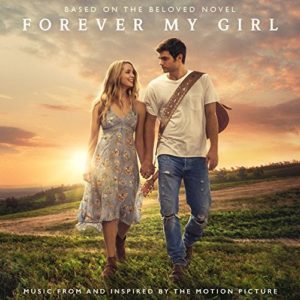