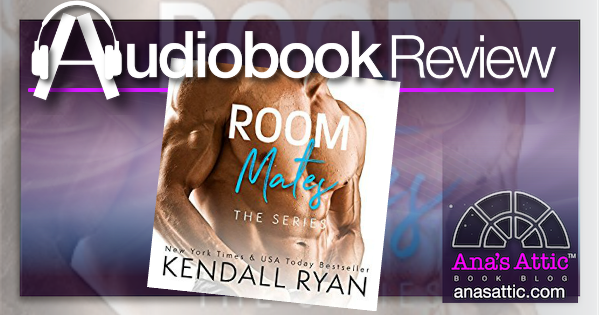 Room Mates: The Series by Kendall Ryan was one of the best uses of an audible credit ever! 4 standalone books for one credit! They even have different narrators. I enjoyed every one of these stories, and I’m going to do a quick review of each.

28 year old Paige’s best friend asks for a favor. Her younger brother, a med student, had his apartment destroyed by a crazy ex, not for the first time, and was evicted. He needs a place to stay and focus on just work until he starts his residency out of town in 2 months.

When he claims that all women who sleep with him fall in love, Paige decides to prove that wrong. Famous last words, right?

“I didn’t have time for distractions, and I’d just promised myself there would be no more fucking around. But all of that went out the window the second I laid eyes on Paige.”

He’s always had a crush on Paige, but she was 4 years older. But now, all bets are off.

The Room Mate was a cute, light, sweet, fun second chance romance. Not terribly unique or memorable, but it had likable characters, a sweet story, and was just a great escape.

The Narration:
Jeremy York and Ava Erickson did a great job narrating, but I must admit, I don’t find Jeremy York’s voice sexy, so I had a little trouble thinking of him as totally irresistible.

This one is big brother’s best friend trope. 22 year old Evie has always had a crush on her 29 year old brother’s best friend. After one half-assed sexual experience, Evie decides she wants her first real sex to be with Smith. She engineers a whole way to sneak into his room and go for it! Honestly, if she were a guy and he a girl, it would be cause to arrest him, but the other way around doesn’t seem to be a problem. I kind of had a hard time with this, especially after this line:

“And come tomorrow night, he wouldn’t know what him him.
The feminist inside me beat on her chest and let out a battle cry.
I was doing this.
I would make Smith my bitch.
And zero fucks would be given.”

Well, the plan backfired – but then they start a job together! And after he had a little taste of her, he couldn’t get her out of his head.

“Somehow over the past couple of years, annoying Evie had morphed into curvy, hot-as-hell, infiltrating-my-dreams Evie, and it was slowly killing me.”

There was some cute banter in The Play Mate, But I felt like what she did was a little rapey and that bugged me. Besides that, this was a cute brother’s best friend romance. Not very memorable, but entertaining.

The Narration:
Sebastian York and Ava Erickson narrated and I LOVED the narration. He was perfect for the part.

The House Mate was by far my favorite of the series, though I must admit, books with a kid really do it for me. 34 year old Max’s ex drops off a 1 year old baby that he didn’t know about and takes off. Max doesn’t know the first thing about babies, but he is immediately in love and wants the best for his baby.

Fresh off a bad relationship where her live-in boyfriend fired her and kicked her out of their place, Addison really needs a job, and getting off her best friend’s couch would help too. When she answers an ad for a nanny, she didn’t expect the dad to be a hot ex-army ranger.

“I should have closed the door in her face the second I saw her smoldering-hot curves.”

He would do anything for his new little girl, and the baby took to Addison immediately (though he’s army, did he not do a background check?), so he hires her on the spot and realizes he has to put his baby before his dick, so he works hard to avoid temptation. But you know how that goes….

“No big deal. This was perfectly normal for a red-blooded male living with sex on a stick. The old nanny fantasy. In my dirty mind, Addison was the perfect sensual vixen, ripe for the taking. And in my mind was exactly where she’d have to stay.”

This one was cute! I like gyno books and this one couldn’t be more awkward. Imagine getting pregnant by a one night stand, going to the doctor to check on it, and the Doctor ‘recognizes’ you in an interesting way?

Bren does not want to get involved with anyone. AT ALL. She is a conservationist who works at the zoo, and she has her animals to love. She’s good with that. She’d rather not love at all than fall in love and lose that love.

Mason wants it all. He has been searching for the one-night-stand girl for weeks, sure she’s “the one”. He’s ready to settle down and start a life.

“What kind of man cooked a perfect steak, delivered prenatal vitamins to you at work, and then brought you to orgasm in five minutes flat? ”

I enjoyed the story a lot, but I didn’t love Bren. I found her too closed off and she just never talked to him. There was also a kind of big medical faux pas regarding some very overdue twins. Mason was amazing. Every girl’s dream on paper, but maybe just a bit too perfect in practice.

The Narration:
The last one went back to Jeremy York again, and once again, I just don’t find him to have a very sexy voice, but he’s still a great narrator, and with the dirty talking in this book, he was a little sexier.

The Down and Dirty for the Series:

All four of these were cute, sweet, sexy and funny. They all used common tropes, so they weren’t hugely memorable, but very enjoyable nonetheless. Each of the novels are available separately, but it’s amazing to see them all together in one audiobook! Over 20 hours of listening makes this one of the best uses of a credit ever. If you are looking for a nice, light, fun listen that you don’t have to be 100% focused on because there aren’t any surprising plot twists to keep track of, this is VERY HIGHLY RECOMMENDED. I struggle with the rating, because the average of the stories is a 4, but the value is a 5! 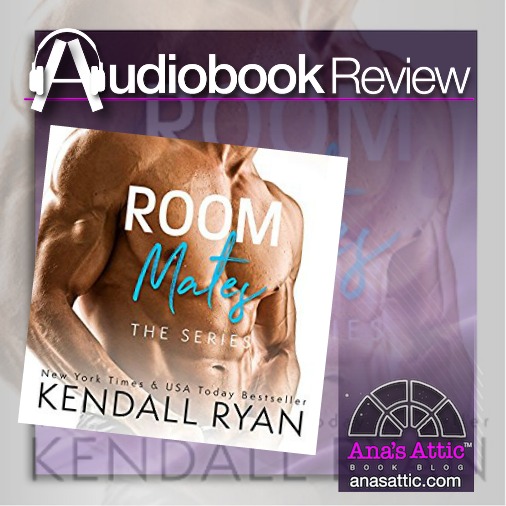