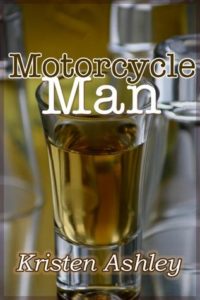 Kristen Ashley has officially ruined me. No other books leave me feeling like hers do! I am so glad I have been pacing myself through her books. They are an indulgence, and need to be treated as such. If I read them all in a row they might lose that special feeling I get when I read her books. You know the one…..when you smile the whole time, even when you cry? That feeling of “Fuck the laundry, I’m reading about Tack!”

“Life’s a roller coaster. Best damn ride in the park. You don’t close your eyes, hold on and wait for it to be over, babe. You keep your eyes open, lift your hands straight up in the air and enjoy the ride for as long as it lasts.”

I didn’t think Kristen Ashley could top Games of the Heart for me. Motorcycle Man, the fourth and last in the Dream Man series, however, is equal to, or surpassed it. We first met Tack in Wild Man, he was awesome then, but overshadowed by all that is Hawk (who appears in this book as well). Or maybe he was in Mystery Man…But now Tack has his own book, and what a ride! Starts out, Tack is a total dick. Tyra goes to her first biker party the weekend before she is supposed to start working at Ride, headquarters of the Chaos Motorcycle Club, which Tack heads. She falls for Tack immediately, hops into bed with him, and thinks he is the man of her dreams who she has waited 35 years for. Until he rudely kicks her out. Then, she drives up for her first day and sees him making out with a brunette who he obviously spent the night with. When he realizes Tyra is there to work, he immediately says NO WAY will he let someone he fucked work for him, “I do not work with bitches who’ve had my dick in their mouth.” but Tyra fights for the job…..with the challenge that if Tack ever gets in her pants again, she is fired.

After Tyra’s feisty argument to keep her job, Tack really sets out to make her his. But she wants nothing to do with the rude, crude, domineering, foul-mouthed badass biker. But let me tell you, she has no choice! Tack isn’t taking no for an answer, and isn’t letting her go. Once he saw she had a feisty side, he was hooked. The two of them argued like crazy, but Kane “Tack” Allen didn’t let her get away with anything. He just bowled right over her. Every time she tried to run, he didn’t allow it. A few times, I must admit, as hot as he is, I was thinking “run, Tyra, run!” especially after putting his hands on her throat. But after reading more about Tack and his history, you realize she’d be crazy to leave!

Wow, the badass sweetness that came out of Tack was awesome. As crude as he could be, he was all hot, sweet badass. Seeing him with his family cemented that. Kristen always does well with the kids in her books, and Tack’s kids were no exception (to be continued in the new Chaos series–squee!) When I say sweet, I mean SWEET.

“No baby, I’m not scaring you. You’re just scared. You give me a little more, you’ll see I’ll protect it. More, I’ll protect that too. When you give it all to me, if it works with us in a way that lasts, you’ll never be scared. You’ll feel safe enough to have your eyes open, your arms up and you’ll enjoy the fuck outta the ride. I’ll see to that, Red, and that’s a promise.”

All of the guys and girls (especially Elvira–I LOVE her–she NEEDS her own KA hottie!!) from the Dream Man series (click for reading order) make appearances in this book. There is lots of conflict from total bitch crazy ex-wives to the Russian Mob and more, lots of SUPER HOT badass biker sex, tons of sweet romance, action, hot bikers and more.

This book dealt with issues like drugs, extra-marital affairs, crazy co-workers who are nice to your face but nasty behind your back (I’ve had this in a big way, I get it, but keying a car in retaliation? No.) I didn’t always agree with Tack’s way of handling stuff, but he is a scary, badass, hot motorcycle guy, so he gets to do whatever he wants, and that was OK with me too.