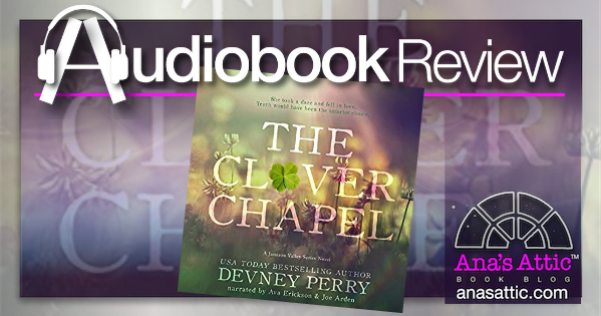 The Clover Chapel by Devney Perry

Second in a series of connected standalones. Contemporary Romance.

If you all follow my blog at all, you know I have a serious addiction to all things Kristen Ashley. Since Devney Perry is constantly compared to her, I decided to give the Jamison Valley series another try. I wasn’t in love with the first, The Coppersmith Farmhouse (my review), but I read it a year ago, and only vaguely recall it. Though the characters from the first book make appearances, I didn’t really remember them, but that didn’t detract from this read. The Clover Chapel is 2nd in the series, but can totally stand alone, though there are spoilers from the first book.

Nick and Emmeline met in Vegas. They had a perfect night together and got married that night. When Emmeline woke up the next morning all she found was his ring and a note that said “I’m Sorry”.

Emmeline is a wealthy New York socialite and for the next 9 years her P.I.s couldn’t find Nick so she could divorce him (Seriously? Any half decent lawyer could get the marriage dissolved based on abandonment). When Emmy tires of the high society life, she decides to leave her boyfriend of 5 years in New York while she pursues her dream of teaching in a small town.

Lo and behold, she finds her husband in Prescott Montana. And he sees her and suddenly wants her back even though they had 5 hours together 9 years ago and he did NOTHING to look for her since.

“You’ve always had my heart, Emmy. We’re it for each other. I thought about you every day for nine years.”

He has his reasons for leaving the first time, but those same reasons still exist. But now he won’t take no for an answer and he’s kind of a dick about it.

“Dinner. You want answers, you can have them at dinner. Tonight.”
“I am not eating with you. My timeline. Remember?”
“And I don’t give a fuck about your timeline. We’re eating tonight. You want answers. You’ll get them tonight. And I won’t be waiting for legal counsel.”

I can kind of see why people may compare these books to Kristen Ashely’s Colorado Mountain Series: There is a small mountain town, alphahole heroes, lots of fun townsfolk, tons of drama and action and suspense, and they are long. But sadly, I never bonded with the heroine or liked the hero, and those things are a MUST for me. I would start to like him then he’d say something and totally turn me off. He was bossy in a not-sexy way, more of an asshole way. I loved her as a teacher, but she was basically a cheater, and I didn’t like how selfishly she handled everything.

“Here I was, making out with another man, when just hours ago I had told Logan that I loved him. Which I did.”

Nick has to work a little to get Emmy back, but nothing has changed, so I am not really sure why it’s OK now to risk her safety when it wasn’t 9 years ago.

“Forgive me. Give us a chance. We have something here and you know I’m right… Your heart still belongs to me.”

Joe Arden and Ava Erickson were amazing. They made up for some of the things I didn’t love in the story.

I had the same problem with The Clover Chapel as I did with the first in the series, I just didn’t love the characters, and thought the alphas were more assholes than anything. I don’t expect my books to be realistic, because what fun would that be? But some of the stuff was a little too ridiculous. Though I was engrossed in the storyline and needed to find out what happened, I never connected with the characters, and never felt like I was experiencing the story rather than just reading it. So many people I trust LOVE this series, so I am so disappointed that I don’t. BUT, I refuse to give up on Devney Perry. I see her talent, so maybe I will try a more recent release from her next.

FREE in the Audible Romance Package 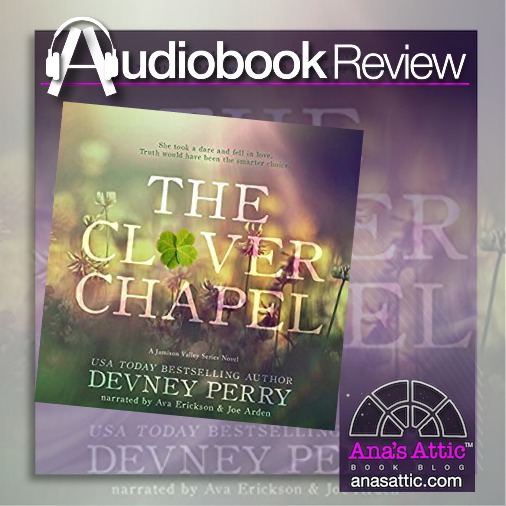