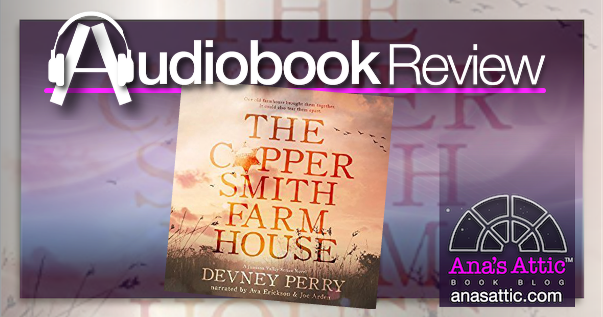 The Coppersmith Farmhouse by Devney Perry

The Jamison Valley Series by Devney Perry has been on my radar for a while now with some of the bloggers I love and trust highly recommending it I love that the covers don’t have a naked torso, and I heard that they have a Kristen Ashley feel, so I was so excited to win the audiobook of The Coppersmith Farmhouse!

I can kind of understand the KA comparison. After all, he is a total asshole to begin with, he is the town’s alpha sheriff, and she is a single mom. But for me, this guy never fully bounced back from his original assholeishness.

“I apologized and I meant it. I was an asshole this week. Now fucking get over it.”

Let me give you a little background. Gigi and her young daughter inherited a house in a small town in Montana from a man that she loved like a father. The house had been carefully maintained and loved by Jess, the town sheriff. So when Gigi shows up with her daughter, Jess just assumed that they were gold diggers trying to get their hands on what should have been his, and was a total dick to her. When he realizes his mistake, he offers a lame apology.

Then he proceeds to bulldoze his way into her life, make decisions for her and ignore her wants and needs. Now usually I love that kind of behavior in KA’s men, but here he just seemed like a total dick. I never fully trusted him, and I understood all of her insecurities. He instantly wanted her and would stop at nothing to get her. Why? Did he really just want the house?

Sometimes I found myself really liking them and enjoying the story, then he would do something she didn’t want and manipulate his way out of trouble, and she couldn’t stand up for herself.

“Wait. What? I’d given in again!
I was definitely still messed up from our kiss because once again, even though I had just told myself to stay strong, I didn’t put up any kind of a fight.”

He turned HER into the bad guy when she got hurt instead of comforting her. He forced his way into sleeping with her with her daughter there when she didn’t want that, then lost his temper and cursed violently in front of the child and still ignored her wishes.

As I listened to the book, these things bothered me. I never liked the hero and the heroine was too weak, but I still liked the story between the conflicts. The writing was solid and the story was paced well. There was some suspense, with drugs being brought into the town and the sheriff’s involvement, but I knew the outcome of the suspense pretty quickly. Still I enjoyed that aspect of the story.

The narration was wonderful. I needed to speed it up, but I really loved both narrators.

The Coppersmith Farmhouse had really good bones. There was a lot I loved about the story, and I listened straight through. But sadly, for me, the most important thing to me is that I love the characters, and while I liked her, I never liked him. He was an asshole from the start and didn’t even apologize well. He had some sweet moments, but mostly he just bulldozed over her to do whatever he wanted, and she would just give in any time he kissed her. I almost felt like this was the type of guy who would get more controlling and abusive as time goes by. I wanted to love this and binge on the series, especially because so many people compared it to Kristen Ashley, but for me, I’m not sure I want to risk a credit on the next in the Jamison Valley series. 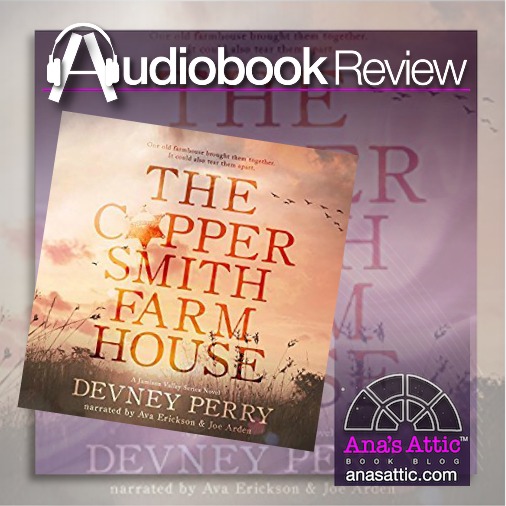