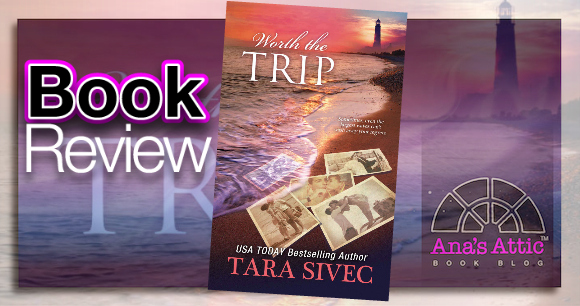 Worth The Trip by Tara Sivec

If you haven’t read Fisher’s Light by Tara Sivec. STOP RIGHT THERE. It is a MUST READ for this year! Worth the Trip is a spin-off of Fisher’s Light, and though it is it’s own story, you need the back story of Fisher’s light to understand what is going on.

It takes place during the storm, but it’s mostly told in flashback. When Beverly was 5, her dad began working with Trip’s dad at the bank. Trip was 7, and forced to spend every weekend watching over the little girl instead of playing with his friends. Until one year Bevy proved that she can play with the boys by climbing a tree like a monkey, with Trip right behind.

It was the first of MANY times that I would follow Bevy O’Byrne. There was something about her that made me want to follow her anywhere.”

Poor Bevy had an awfully rough life. Her parents basically abandoned her, and Trip became everything to her.  And that never changed. Their childhood love grew into adult love, and it was a beautiful story. Fisher’s Island was a place of sadness for her, except where Trip is concerned, but Trip turned it around for her. He loved her so fiercely even the idea of sharing her with a child was hard for him. Their story explained so much in Fisher’s Light.

Worth the Trip filled in lots of little details from Fisher’s Light. I do, however, wish Fisher’s Light was a little fresher in my mind when I read this, because I found myself a bit confused and lost once in a while, and I think I would not have had this issue had I read it right after Fisher’s Light. But you should know, I have a really crappy memory. Most of the story was the flashback romance, and you need not remember Fisher’s Light to enjoy this sweet childhood friends to lovers story.

Had I read Worth the Trip directly after Fisher’s Light, I think I would have enjoyed it even more. Don’t get me wrong, I loved everything about Trip and Bevy’s story, but felt a little forgetful when I read the present day stuff. I think because it was told in flashback from Trip’s writing, I didn’t quite connect as much as I normally do, but I still loved every word. If you have read Fisher’s Light, I say this is a MUST READ, and it will totally fill in blank spots you didn’t even realize were there.

Purchase Worth The Trip by Tara Sivec