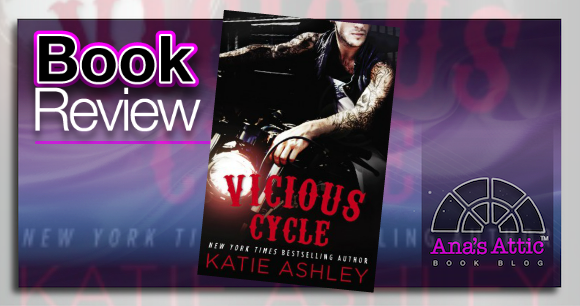 1st in a new MC series, can stand alone

I enjoy MC books, but I try not to read too many, because I have noticed that even my favorites tend to run together a bit in my mind. But I really enjoy Katie’s smile inducing stories, so I was eager to see what the southern sweetheart would do with an MC book.

Katie’s writing was great in this, but the subject matter just wasn’t very new, quite frankly, but MC books just can’t really be unique anymore. After a gripping prologue, Vicious Cycle lost a bit of the uniqueness of the story and became very familiar. The thing that made it a bit more unique was that Katie’s sense of good and sweetness shone through despite her trying to suppress it with very, very brutal scenes. And Katie did not hold back on the brutality of the hero’s sergeant-at-arms position.

Vicious Cycle began with a brutally vicious scene in which young 5 year old Willow sees something horrible happen to her mother. She is then brought by a friend to live with her father, Deacon, who knew nothing about her, except that she hasn’t spoken a word since her mother’s death.

Deacon is in the Hell’s Raider’s motorcycle club. As we meet the members of the club, I had a super-hard time keeping them all straight, because they all had church names…Preacher, Deacon, Reverand, Bishop (I think I’m missing 1-2). Deacon vehemently denies he could have a daughter, but since she’s the spitting image of him, he can’t deny it for long.

“As I held my daughter in my arms, I realized how life could change on a fucking dime. Today mine had done a one-eighty.
I was a father. And even if it fucking killed me, I was going to be the best damn one I could. No one was ever going to hurt Willow on my watch.”

You would think he’s be an awesome dad after that quote, right? WRONG. He was a dick to his daughter. His soft side came out for a minute or two here or there, but in general he was still angry and brutal.

When the club gets caught up in a war, they pull Willow out of school for her protection. This causes her teacher, Alexandra, to ride over her house and speak with her dad. Bam. Instant attraction. When Alexandra realizes the dire situation, she offered to tutor Willow at her home, the compound.

Suddenly Deacon turns sweet. But not really to his daughter, which really bugged me, but certainly to Alexandra. 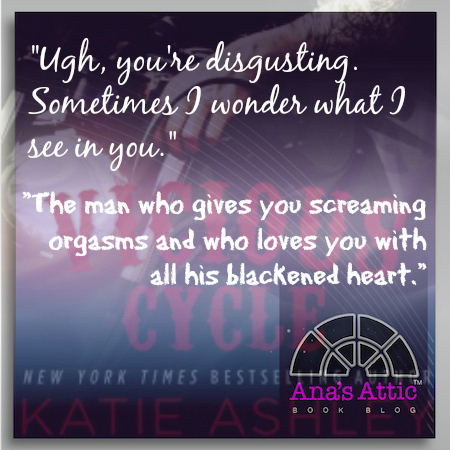 The Down and Dirty

I was torn on this book. I love Katie’s style, and the sweetness came through despite some really brutal scenes. I love books with kids, and Willow was awesome. The MC part wasn’t very unique however, and there was nothing that really stood out as different to me. I certainly never saw the appeal of Deacon, but I loved the heroine, Alexandra. The change in Deacon was so extreme it was a bit over the top, but I still enjoyed the quick read from beginning to end, except for some confusion when being introduced to too many characters at once. I enjoyed this enough to read the next book.