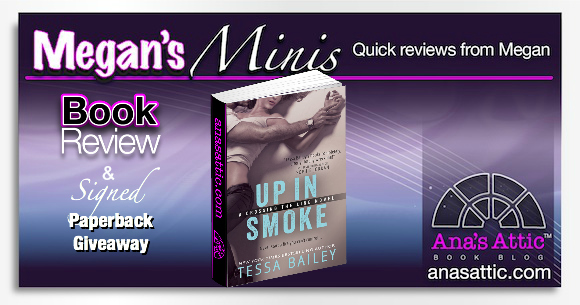 Up In Smoke by Tessa Bailey

Up in Smoke is the second book in the Crossing the Line series by Tessa Bailey. The first book, Risking It All, was a 5+++ star read for me…leaving big, giant shoes to fill (see my review). But, as always, Tessa Bailey did not disappoint.

This series features the anti-heroes…good people who have done bad things. Connor Bannon, an ex-Navy SEAL who was dishonorably discharged, has spent 2 years of his life reluctantly working for his cousin’s “business”…a business that operates on the wrong side of the law. When presented an opportunity to work with the Chicago PD as an undercover agent, Connor accepts the chance to take down the same kind of criminals he used to work with, side by side. Being a man who lives his life based on exceptional control, he is thrown for a loop the minute he meets Erin…the tiny little arsonist in her short shorts and combat boots.

Erin O’Dea, also know as “She’s Getting Away” O’Dea is one feisty fem. She hates authority and being controlled. Stemming from her innate fear of being confined, she had mastered the art of escape. Within moments of meeting this  strictly controlled ex-military man, Erin finds herself battling her urge to run, yet get closer at the same time.

I LOVED THIS BOOK. Connor is so effing intense…he brings protective to a new level. All about control, it’s fascinating to watch him come undone with Erin. And Erin…she has wiggled into the spot of one of my favorite leading ladies. I was so enthralled as she worked through her demons…so invested in her healing and ability to overcome.

This isn’t going to work.” She spoke to his reflection in the glass, but it still hurt. Especially when his eyes blazed open at hers. “What were we thinking?I spend my life avoiding being tied down. You need to control and fix and manage. It’s a fucking countdown until you start to resent me. Let’s cut this short, shall we?”

You want freedom? Fine. I can’t stop you from slipping out windows or walking out doors. If I have to go insane with worry in order to keep you, I’ll do it. I’ll do it for how I feel when you show up again. I’m not giving up. And you insult me by thinking I can’t take some frustration. Some pain. Bring it, Erin. I’m fucking ready.”

Now, let’s talk steam. HOT EFFING DAMN. You learn early on that Erin can’t handle being touched…for fear of being restrained. It causes her actual pain. So watching the chemistry between them has you wiggling in your seat. The sexual tension is OFF THE CHARTS. How is it possible that a scene can be so incredibly HOT when the man isn’t even touching the woman? HOW? I don’t know…but Tessa Bailey does it…and she does it well!

You won’t let me touch you, Erin? You sure as hell better ride me rough for the both of us.” He gave an upward thrust of his hips. “My cock is big and angry because you made it that way. That makes it your responsibility. Move.”

Ultimately, this story was freaking amazing. This series is quickly becoming my favorite of Tessa’s. There is an intensity in these books that is hard to describe. These heroes and heroines love HARD and FAST when their soul recognizes its other half. Even though it takes awhile for their minds to catch up. This was a fast paced, piping hot read. Another hit for Tessa Bailey!

Purchase Up in Smoke by Tessa Bailey 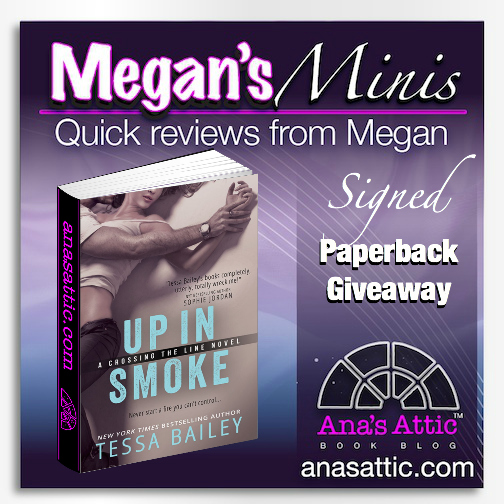