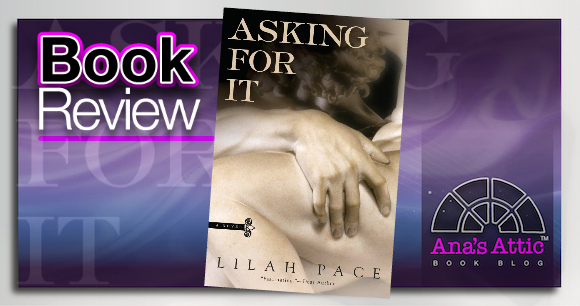 Asking For It by Lilah Pace

Asking for It by Lilah Pace came with some really strong warnings, and though I don’t usually enjoy very dark books, the blurb and warnings appealed to me. There are definitely some triggers you need to know about right up front. This is about non-consensual sex/rape fantasies, but there are also flashbacks to an actual rape.

If it’s all in my head, and it makes me come, what’s the harm…the harm is when the lines between reality and fantasy get blurred.”

Sounds dark and a little too taboo, right? But it wasn’t. The writing was excellent, and it was a wonderful combination of hot and sexy, romance, danger, great character development of pretty deeply damaged characters, and mystery.
.
Vivienne is a graduate student, artist and teaching assistant at UT in Austin. She is your average young lady, but she harbors a dark secret. In order to orgasm, she has to fantasize that she is being forced, coerced, and bent to someone else’s will. She is mortified and ashamed by this fantasy, and has been in therapy for years, but it hasn’t abated.
.
When Vivienne gets stuck on the side of the road with a flat, a gorgeous stranger helps her, but all she can think of is him taking her against her will. She has never felt such a deep pull to someone, but he changes her tire and leaves, leaving Vivienne only with her thoughts and fantasies of him.
.
Until she runs into the professor at a friend’s party, right as Vivienne’s drunken ex blurts out something about not being able to fulfill her rape fantasy. And Jonah offers to help her out.

With a boyfriend you can pretend – but it’s a joke really. A game. Not the fantasy you really want. Me? I’m nearly a stranger. I can do more than fuck you. I can scare you a little. Just a little. Enough to make it what you really want.
“It’s your fantasy, and mine. Chances like this don’t come along often–two people twisted in the exact same way.”
“I knew the truth as soon as I saw your face. You want that fantasy. You want it more than you’ve ever wanted anything else.” He looks directly at me for the first time. “You hate it, don’t you? The fantasy. I do too. But it doesn’t change anything.”

Despite the years of fighting the fantasy, Vivienne relents.

The fantasy that dominates me – it’s sick, and it’s twisted, but it’s not going away. Fighting it hasn’t done any good. So I’m giving in. Surrendering.’

Their relationship begins with a series of FUCKHOT sexual role playing/rape fantasies.

I could back you into that alleyway,” he whispers. “Just a few feet away. Five steps and we’d be in the dark, where nobody could see you, and nobody could stop me.”
“I’d scream.”
Jonah’s eyes darken. He likes it when I play along. “I wouldn’t let you,” he says, as two of his fingers slide up to cover my lips. “I could cover your mouth while I pinned you against the wall. That would leave me one hand free. So I could reach up under that little dress of yours. Pull your panties down.”

At no time though, did I ever really worry about Vivienne. This was consensual rape fantasies, not actual rape. In fact, I kind of wish it was rougher. Jonah seemed more than safe, and would protect Vivienne with his life if he had to. 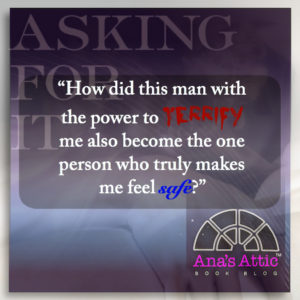 Protecting me as he plans to terrorize me. This is the paradox of Jonah Marks.”

The first half of the book was amazing, hot and fast paced. It slowed down a little midway when the strangers became more of a couple, and the kinky sex was less frequent. But the character development was deep throughout. As much as I enjoyed the book, I found it rather tame, and found myself wondering why they never even mentioned a traditional D/s relationship which would have many of the same aspects without the guilt they both attach to it.
Likes:
Dislikes:
Rating 4.5 stars, 5 Heat

Though Asking for It by Lilah Pace should be a pretty dark book, it didn’t really read as dark as I would have liked (and I don’t usually love dark). All of the fantasies are planned and consented to, which took away a lot of the excitement, but it also made it easy to read and palatable to anyone who wouldn’t have triggers. Filled with hot sex, a budding romance and angst, I am recommending Asking For It as a unique and sexy read, and I am looking forward to reading the next book in the series.

Purchase Asking For It by Lilah Pace 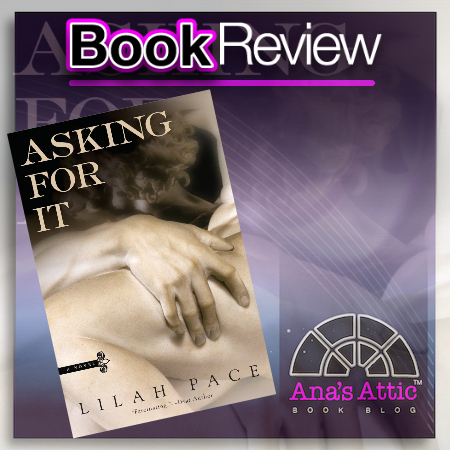