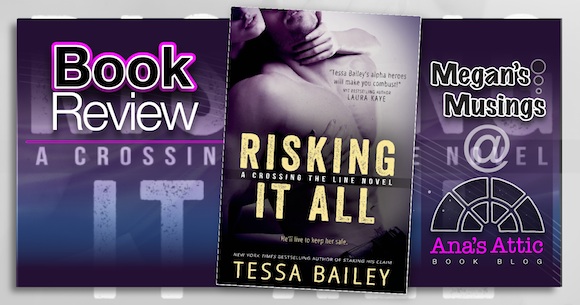 Risking It All by Tessa Bailey

Part of a Series but can stand alone

Risking It All is the first full length novel in the Tessa Bailey’s new series Crossing the Line. For those of you who have read Tessa’s Line of Duty series, you have met the main character, Bowen. I was really hoping he would get his own book, and Tessa delivered. There are two prequel novellas in this series, His Risk to Take and Riskier Business, and they set the stage for Bowen’s book. It is not required to read these beforehand, but I would strongly recommend it. I mean, it’s Tessa. It’s not like you can go wrong or something.

So, I KNEW Bowen’s book was going to shatter me. Even from the little doses we got of him in previous books, I saw his beautiful soul…and I saw that he was trapped…and I saw that he was broken. In this story, you learn just how beautifully broken he is….and if you’re anything like me, his story will wreck you. But don’t worry…Tessa would never leave you in misery. She makes sure that Bowen gets the happily ever after he deserves so much.

Before I get into the review, I’ll share my initial reaction to finishing the ARC. I sent Tessa a message that read like this: “Holy shit! Holy shit! Holy SHIT!!!! TESSA!!! Bowen’s Book!!! O…M…G!!!! It wrecked me! He’s so beautifully broken! Gah! Ultimate perfection. Utter and sheer PERFECTION.” Basically, I was reduced to typing in shouty caps and using excessive exclamation points. That’s how FABULOUS of a read this was for me.

In most of Tessa Bailey’s books, the heroes are usually cops, detectives, hostage negotiators, explosive specialists, etc. But not Bowen, he’s just the opposite. Bowen is a good guy who feels trapped in a world where he is compelled to do bad things. He’s on the wrong side of the tracks and doesn’t see a way to cross over. You see, he is the heir to a criminal empire and is standing in for his father who has recently imprisoned. He was trained by his father at a young age to use his fists as a weapon and has spent his entire life being the muscle and the debt collector. He sees himself as so far beyond redemption, and destined to continue this life.

He has connections to the NYPD and is offered a full pardon of his crimes if he helps them out. An officer has gone rogue to seek vengeance on the man who killed her brother. And her uncle is the police commissioner. Bowen immediately rejects this idea. I mean WHY would HE work with the COPS? This all changes the minute he is shown a photo of the officer who needs protection… Seraphina Newsom. Something about Sera ignites a protective streak in Bowen. Maybe it’s her innocence…her sweet freckles. He doesn’t know. But what he does know is that she is undercover…Alone… Surrounded by dangerous criminals. And all he knows is that he will do anything in his power to keep her safe.

Sera Newsom is fiercely independent. And she is determined to bring justice to the man who killed her brother. She took a leave from work to go undercover, without department permission, to seek out evidence that will take down the man responsible for her brother’s death.

But under her tough exterior, Sera is innocent…in all ways possible. And Bowen knows this.

During their first meeting, Bowen gives Sera a nickname, which from this point forward is my favorite endearment of all time. I swooned so freaking hard.

Ladybug??? Seriously??? I die. This name fits her so perfectly; I just can’t even describe the feels I had every time he called her that.

The sweetness that pours from Bowen is overwhelming. But he Just. Doesn’t. See. It. He loathes the life he leads, and in turn, sees himself as unworthy. Unworthy of Sera. Unworthy of love. Unworthy of the chance to live a “normal” life. GAWD. My heart.

This story had no shortage of laughs. I loved Sera’s snark and Bowen’s humor. Together, they were hilarious! The church scene had me rolling.

That’s Mrs. Cormac, my fifth grade teacher….there is a reason she doesn’t look happy to see me. I once put a live chicken in her desk.” She slapped a hand over her mouth, but not quickly enough. Her clear, tinkling laugh sailed past her lips, drawing everyone’s attention….. all Bowen could do was shrug and give an apologetic smile, teeth and everything. Apparently, his apologetic smile was a little rusty, though, because it only seemed to piss them off more. “She’s just so happy to be here,” he called, making Sera bend at the waist to hide her face between her knees. “Please, continue.”

And the entire book was jam packed with sexual tension. Steaming HOT goodness. Bowen has a deliciously filthy mouth. I mean…for reals, babes…FILTHY.

Ah, sweetheart, I don’t fuck around with virgins.” His head dipped, teeth closing around her ear and tugging. “But I’ll get down on my knees and eat that untouched pussy like a motherfucker.”

You want to jerk me off, baby? Fine.” Sweat had started appearing on his forehead. “But don’t you dare put me in that innocent little mouth. I’m warning you, I won’t be able to keep myself from fucking it until you know what I taste like.”

But even though the overwhelming desire to be with one another is evident, Bowen just can’t see himself as worthy. His internal battle is killing him. 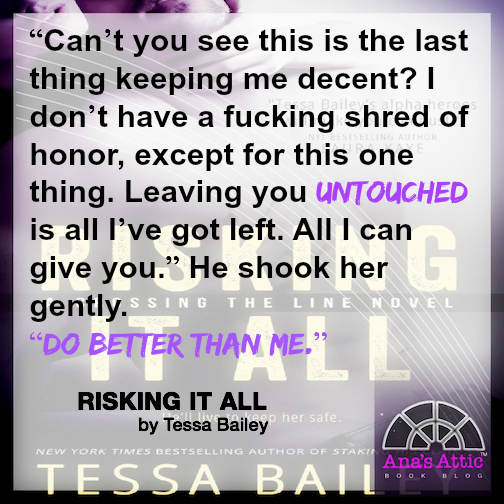 AHH! My freaking heart!!! Bowen, Bowen, Bowen. Sera, she sees so much in him. She knows he is a good man, the best kind of man, who has been handed a life of doing bad things. But she KNOWS he is capable of redemption…she just has to figure out how to make him see it too.

Risking It All gripped me from start to finish. I simply DEVOURED it. Bowen had a special place in my heart before his book was ever written, but now that I have had his story??? MINE. Tessa did a spectacular job with this one…one of my FAVORITES from her yet…which is saying a lot because I didn’t think ANYONE could push Oliver from Exposed by Fate out of his spot at the top. I’m SO excited to finally meet Tessa at Wicked Book Weekend. I am pretty sure there is a tackle hug in her future.

Purchase Risking it All by Tessa Bailey 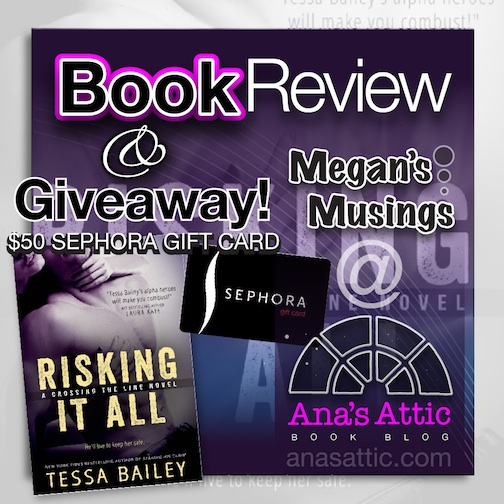