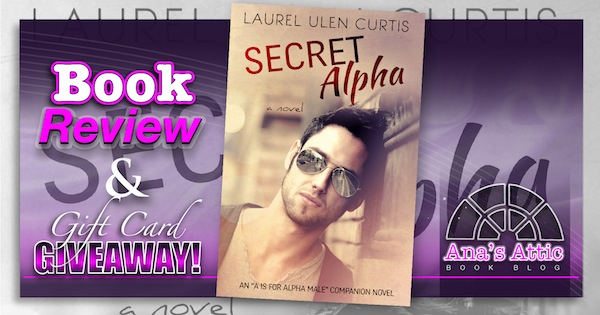 Companion Male POV to A is for Alpha Male which should be read first.
Humorous (at times) romance.

My biggest surprise read of 2013 was a little book called A is for Alpha Male by Laurel Ulen Curtis. One of my favorite reads of the year, it made me laugh and swoon. I just fell in love with the characters! Haley and Allison, daughter and mother, went on a road trip in search of their very own Kristen Ashley alpha male. Not only did I love all of the references to my favorite author, I just fell in love with Laurel’s writing and the characters.

Years of  brain cell abuse has made my memory suck. I remembered I loved A is for Alpha Male. I remembered the characters, but I forgot some really important parts. Luckily, Secret Alpha, the companion novel from the male POV (Danny) filled in the blanks nicely, though I was a little worried for the first two chapters.

Then I fell in love again. As soon as Dan sees Haley for the first time, the magic struck again.

**NOTE: This book pretty much stands on it’s own, but it will will ruin A is for Alpha Male for you and it won’t be nearly as good if you don’t read that first. And you should, you really, really should.

“If love were a location, it would be a paradoxical mixture of the safest place on earth and the most vulnerable.”

While A is for Alpha Male is about a mother/daughter journey as well as a romance, Secret Alpha is just as much about Dan and Wade’s journey. Wade adopted the poor, broken boy who watched his family get killed, and has been with him ever since.

“Sometimes it just takes one person. One person to fight for you, try for you—to be the filler to every last void in your life. One person to make you want to keep living.
Wade was that for me.
And I had the sneaking suspicion, that I was that person for him.”

Dan had secrets. His whole life was a secret. We didn’t know what what was really going on in A is for Alpha Male because we saw what Haley saw. In Secret Alpha, we see the whole story that we didn’t even know we were missing.

We get to see Danny before he meets Haley. He’s had nameless, faceless women because his line of work forces him to stay unattached. He’s getting tired of the pussy parade.

“No thank you to the free vagina.
I’ll pass on the promotion today”

He can’t lose focus now, but when Haley enters the bar, she is like a tornado that you can’t help but get sucked into.

“I’d be scared to see what happened if you tied her up and left her immobile all day, and then released her, the freedom to explode taking over and leaving gooey bits of crazy all over the place.”

I love seeing Haley and Allison’s crazy personalities from the outside, and even more, I loved how Dan-o loved every single thing about his cute, crazy Hales.

“Watching her continually increase her ridiculousness in an attempt to pull my attention was half the fun. I was curious to see how far she would go, how much of a show she would put on.
Maybe if I was really lucky, she would take off her top. Jump around a little bit.”

We got to see where Danny was when he didn’t call for a few days. Being that he was in a pretty crappy place, and that this was his book, Secret Alpha had a darker feel. While A is for Alpha Male is all silly and light, Secret Alpha shows the light Haley brings in to Danny’s life, and I really enjoyed that. He’s had it so rough for so long.

“I tried to be serious, but come on.
She was naked.
In my lap.
On my motorcycle.
And she was giving me one of her signature comical rants.
I was in heaven, and the smile on my face reflected that.
‘You’re like a Secret Alpha. Controlling the situation by using ass backward Jedi mind tricks.’
Ha. Secret Alpha. I liked that.”

“Watching Haley with her mom, I had longed for that kind of overbearing love. What I didn’t realize was that I already had it, it was just dressed down and undecorated, just like our man cave of a house.”

Though I loved Secret Alpha, it didn’t make me giddy and want to run around hugging my Kindle–it wasn’t as fun of a read, but it really shouldn’t be, since it’s Danny’s book. I knew I wanted a little more in A is for Alpha Male, but I had no idea there was this much more! Secret Alpha was sexy and fun, and the way it worked seamlessly with A is for Alpha Male makes it seem as if this entire story was fleshed out before a word for either was typed.  Now let’s see Wade and Allison get their own stories!!! Wade, especially needs some love.

‘She was to me as her characters were to her – entertaining even with the simplest of tasks and eye catching in a way that you couldn’t look away. And real. So fucking real it almost hurt.’

I used this in my A is for Alpha Male Review, but this scene was in Secret Alpha as well, and I still love it. 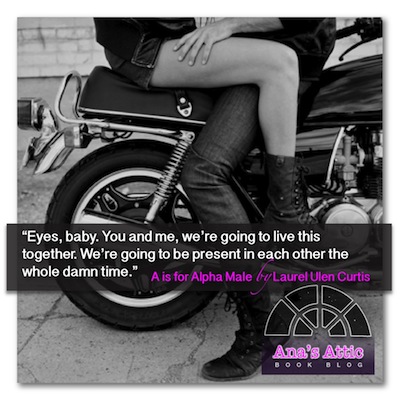 Purchase A is for Alpha Male by Laurel Ulen Curtis