Music of the Heart (Runaway Train 1)

For Abby Renard, the plan was supposed to be simple—join her brothers’ band on the last leg of their summer tour and decide if she’s finally ready for the limelight by becoming its fourth member. Of course, she never imagined stumbling onto the wrong tour bus at Rock Nation would accidentally land her in the bed of Jake Slater, the notorious womanizing lead singer of Runaway Train. When he mistakes her for one of his groupie’s, Abby quickly lets him know she sure as hell isn’t in his bed on purpose.

Jake Slater never imagined the angel who fell into his bed would resist his charms by promptly kneeing him in the balls. Of course, the fact she seems like a prissy choir girl makes her anything but his type. So he is more than surprised when after betting Abby she wouldn’t last a week on their tour bus, she is more than willing to prove him wrong. But as Jake’s personal life begins to implode around him, he finds an unlikely ally in Abby. He’s never met a woman he can talk to, joke with, or most importantly make music with.

As the week starts comes to a close, neither Abby nor Jake is ready to let go. Can a sweetheart Country songstress and a bad boy of Rock N Roll actually have a future together?

Beat of the Heart (Runaway Train 2)

After years of bad relationships and a cheating ex-fiancé, twenty-eight-year-old Mia Martinelli prefers healing her patients’ hearts on the Cardiac Care floor rather than risking having her heart broken again. But that all comes to a screeching halt when caring for the head roadie for Runaway Train puts her into the orbit of drummer and Latin Lover, AJ Resendiz. After a scorching weekend of steamy passion, Mia’s intention of getting out with her heart unscathed is challenged by the stud with the wicked sense of humor, especially when he wants to continue seeing her. But when the harsh reality of AJ’s hoard of female admirers sends her insecurities into overdrive, Mia bails, leaving him handcuffed to his bathroom shower.

AJ never imagined that after two weeks of the best sex and female companionship he’d ever experienced, he would need rescued by his band mates from his shower prison. Although he tries to forget the sensual brunette whose curves made his mouth water, AJ can’t get her out of his mind…or his heart. Months later when he finally seeks Mia for answers as to why she left, nothing could prepare him for their life-altering reunion.

Can AJ prove to Mia that regardless of the women after his body, his heart belongs only to her?

Music of the Soul (Runaway Train 2.5)

In Music of the Heart, an unexpected twist of fate caused Abby Renard to fall into womanizer Jake Slater’s bed. What started out as a small spark between the unlikely pair, grew into a deep and intense love. After a year-long engagement, the two have finally been able to set a wedding date. It’s off to Mexico for a destination ceremony on a private beach. After a heated week long honeymoon in a tropical paradise, the two return to the real world of touring and making music together.

As the newlyweds settle into married life, another twist of fate challenges their love. For once, Abby isn’t able to be the rock of strength that Jake needs. Can the two of them hold on to the strong foundation of love they have built, or will it crumble under the pressure?

Strings of the Heart (Runaway Train 3)

Twenty year old, Allison Slater has been in love with her brother’s bandmate, Rhys McGowan, since she was fifteen years old. But to him, she’ll always be Jake’s little sister and off limits. Now a college sophomore and licking her wounds from a bad breakup, she sets her sights on making Rhys see her as someone he could date…maybe even love. Her opportunity comes when Rhys visits his parents in Savannah where she is attending college. But the night she’s dreamed of turns to heart-break, and she realizes she’ll never be the one for Rhys.

For Rhys McGowan, his nightmare began when he woke up, naked and hung-over, next to his bandmate’s little sister. Unable to remember a thing from the previous night, he only makes matters worse by lying to Allison about not being interested in her. The truth is he’s spent the last year to ignore his body’s reaction whenever Allison is around. His resolve is tested when Allison comes on tour with Runaway Train, as both Jake and Abby’s nanny and to fulfill her fashion design internship. The more time he spends with her in the close quarters of the bus, the harder it is for him to resist.

Will Rhys realize that having a relationship with Allison is worth fighting for even if it means that he has to fight his best friend for a chance? 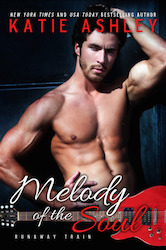 Melody of the Soul (Runaway Train 3.5)

As Rolling Stone magazine prepares an issue on successful rock star marriages, they sit down with Brayden and Lily Vanderburg. After all, the two have been a couple since they were fifteen years old. But there is more to the story than meets the eye, and their love took a slight detour before finding happily ever after.

Told in flashbacks from the present to the past, Brayden and Lily share the story of their unbreakable love.