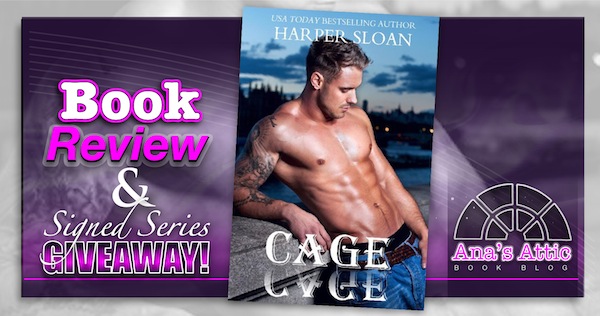 Standalone, part of a very connected series that should be read in order. Adult Contemporary.

When I read Axel, the first in the Corps Security Series by Harper Sloan, I totally fell in love with the heroine’s best friend, Greg Cage. We learned that he lost his sister Grace horribly at the hands of her abusive husband, but that made the delicious alpha even more protective of the women he loves. He felt like he could have, and should have been there for his sister, and he damn well will not let another woman get hurt on his watch.

Cage by Harper Sloan begins with Cage fucking Mandy, who he keeps around just for sex. But Greg being Greg, he gets a call from Izzy, and throws the girl out, hereby causing her to show her crazy bitch colors. 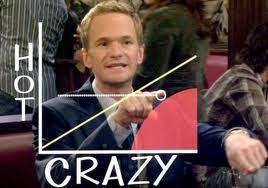 “Crazy bitches. This is why I avoided relationships for so long.”

Cage needs to help out Axel and Izzy as they get ready for their wedding. Their baby, Nate got sick, so uncle Greg brings him to the Doctor for them. That’s when he meets nurse “Wet dream”, and BOOM. Sparks fly. But Melissa’s sister was hurt in very much the same way that Greg’s was, and she felt she couldn’t trust that men don’t all turn bad.

“After watching how well that turned out for my sister, there is no way I’m getting involved with Mr. Sex on Legs. I need to find a short, skinny, balding man. Someone safe.”

Melissa is strong. She is helping her mom raise her sister’s son, Cohen, and hopes to take full custody when she saves some money. But living on a nurse salary and working long hours and caring for her mom and nephew make that hard. She’s very independent, and didn’t have time for a man in her life. Especially one like Greg Cage.

“No man who oozes so much alpha male will be happy with a woman who isn’t weak. Or he won’t settle until he makes me weak, and I will NEVER be that bitch.”

“What’s your name, beauty?”
“Mmm, fuck…you feel like fucking heaven.”
“Your body wants this as bad as your mind does. I can feel how wet you are. Come on beauty, lets get out of here.”
“Do you taste as good as you feel? Warm and juicy? Like a ripe peach that’s mine for the picking?”…”Ripe enough to devour.”

But when crazy bitch Mandy showed up, Melissa totally held her own.

Though Melanie doesn’t fight the attraction too much (who would?) she definitely makes Cage work for it.  But when they finally get together…HOLY SMOKES. Cage is:

He is pierced for her pleasure.    Not just once…..

“You won’t be complaining about that one when it’s slamming against your clit, promise you that.”

Besides Greg Cage’s piercings and his “beast” like tendencies in the bedroom (yum), what I really liked about him was how amazing he was with Cohen, Melanie’s three year old nephew. And Cohen was one of my favorite book kids ever.

“Melwee? What are you doing? Why is Greg not wearing his big boy underwear? Why doesn’t Greg have clothes on? I wannabe naked! You’re gonna see his wiener, and Nana said that boys shouldn’t show their wieners to girls. Its naughty. You’re gonna go to time out.”

I liked how they didn’t spend huge amounts of time fighting their inevitable relationship. In fact, it happened so quickly, that Cage was afraid to tell Melanie a big truth about something that have in common. A truth that could potentially hurt them.

Even with that secret, Greg is still amazing.

“You don’t have to be strong all the time. Let me take it, Beauty. Let me be your rock. Let ME fight. For Christ sake, let me be who you need.”

Rating: 4.75 stars (would probably be a 5 if edited better, will be rounded up elsewhere)  4.5 Heat (it’s totally hot, but you usually need a little more kink to hit 5 on my scale)

I absolutely LOVED Cage. If you love a pierced, alpha, protective, possessive security type with a super mushy core, Greg Cage is the perfect one for you. If you don’t fall for his pierced peen, beast in the bedroom and protective nature, you won’t be able to resist when you see him with little Cohen.

If you are a fan of Kristen Ashley’s Rock Chick or Dream Man Series, you will LOVE these books. They have the same feel to them, and believe me, that is the highest compliment I could pay an author.

As soon as I finished Cage, I didn’t take a breath and started Beck immediately. Not only because I wanted to read Beck’s story, but because I couldn’t wait to read more about Beauty and her beast in Uncaged (which you shouldn’t read before Beck). I just can’t wait to read more from Harper, she has quickly moved up into a favorite author category, especially after meeting the totally down-to-earth, cool, I wanna-be-her-best-friend woman at Wicked Book Weekend. Plus, her swag was the best! 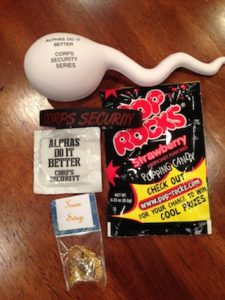 Although Axel, Cage and Beck stand alone, I highly recommend you read them in order. Do not give in to temptation and read Uncaged before Beck.

This is the first of THREE sets of giveaways from Harper this week. She is giving away a signed set of Axel, Cage and Beck for my reviews of Cage, Beck and Uncaged, all coming this week. I reviewed Axel in January with 5 stars.