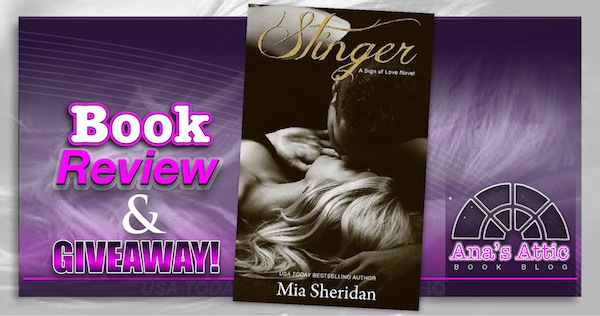 Part of series but the books are not related. Standalone adult contemporary.

Stinger is the second book I have read by Mia Sheridan. The first was Archer’s Voice, which is one of my favorite books, so I couldn’t wait to read more from her! Stinger is actually part of the Sign of Love series, but these books are completely unrelated standalones.

“Sometimes you don’t even realize anything is wrong until someone comes along and changes you, and makes you want more.”

Grace Hamilton is a law student with her life planned out. She had her future mapped out perfectly and intended to let nobody sidetrack her from her goals. Until a weekend in Vegas. Grace is there for a law school convention. As she meets and connects with another young man, she assumes he is there for the same convention. Until she reads his name tag.

Let me guess, law student conference?”…
“Yes, actually. Is there something wrong with that?”
“No, not at all. Looks like we’re both here to learn to be the best at getting people off.”

Carson is an adult film star, who is at a convention in the same hotel. Though new in the industry, he has a contract and is moving up quickly. He was born into the industry. He grew up in it, and never thought he had other options.

“I guess I tried not to think about my fans too much because let’s be honest, they admired me for reasons that made me think it was better that I not shake their hands.”

As Grace and Carson bump into each other, it’s clear they are fighting an attraction. But they cover it up with snarky banter (I love that). Until they are stuck in an elevator together, and Grace has a panic attack. As Carson calms her down, they spend a few hours getting past their pre-conceived notions and get to know each other.

“Lose control, baby. Just for a weekend. Let me take charge. I’ll take good care of you, I promise.”

“Carson, I want…” she moaned.
“What Grace? What do you want,” I choked out.
“Everything. I want everything,” she panted. “Everything you have to give.”

These two spent a helluva weekend together. It was round-the-clock HOT but they also really opened up and got to know each other.

“Why do you call me Buttercup?

Since I fell in love with Mr. Ana on a vacation weekend, I totally related to the insta love. But they know this can’t go beyond the weekend. Grace had to go back to Washington DC for school. Carson had a shoot coming up where he had to sleep with another woman, something Grace could not deal with. So they know they have to part. Even though their feelings had grown way beyond a weekend fling.

“Love doesn’t always make sense. And that’s the great beauty of it, the great mystery – the thing cynics who scoff at so-called ‘insta-love’ would bottle if they could.”

At this point, I loved the book. It was happy and sweet, but very similar to the last book I read and loved; but then it took a turn that I never expected, and the second half completely changed the book! I don’t want to even give a hint away, you’ll have to read it yourself.

Mia Sheridan is definitely an author who I plan on reading a lot of. I certainly can’t wait to read more from her.  I think the only reason that this didn’t hit 5 stars for me is comparing it to Archer’s Voice, because Stinger had everything I love. Fun banter, touching moments with a few tears, great sexy times, some angst all rolled into an unputdownable read. While it may have started out as “Hot male porn star meets uptight law student”, it turned into so much more. Filled with heart and surprises, Stinger is a book I can easily say I love.

These books, except Leo and Leo’s chance are not interrelated except for the Sign of Love series title. Click covers.