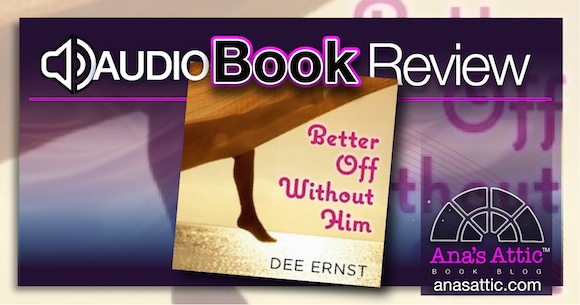 Better Off Without Him by Dee Ernst Narrated by Gillian Vance

Romantic Comedy/chick lit/Older Heroine. Stands alone, but there is a sequel that is available.

If you like older heroines with kids, get ready to laugh!

Sometimes a narrator can ruin a book. Sometimes they make it better. In the case of Better off Without Him by Dee Ernst, I have to say the narrator made the story even better. In fact, this is a rare case that I can’t really separate the story from the narration because I just loved her so much. Did I love the way 45 year old Mona Berman was written? Yes. Or was it the narrator’s amazing acting skills? It was the combo, and I totally loved her.

Mona is a successful historical romance author. She has 3 teenage girls, and I love her attitude about them, she clearly loves them, but has no problem saying one of them is a bitch (because really, what teenage girl isn’t?) She has been married 20 years, happily, or so she thought. Until her husband came home one day and told her out of the blue that he was leaving her for a much younger, skinnier, blonde french girl named Dominique.

“Mr. Arnold,” I said between clenched teeth, “looking into a lighted make-up mirror with a plus-seven magnification is a humbling experience. Having your husband leave you for a younger woman just plain sucks.”

While it threw her for a loop, Mona’s pride seemed to take more of a hit than anything. Better Off Without Him leans a little more chick lit than romance, because most of the book is about Mona’s adventures in “practice dating” after 20 years off the market.

As a bestselling author, Mona is having a lot of trouble writing romance after what happened, so she decides to write a book about a 45 year old woman whose husband leaves her, and she discovers herself, and that she is better off without a man. Convincing her agent and publisher is a whole different story. So we have a story within a story.

The side characters were great too. Her gay assistant was fun (though a little cliché), her friends were were people I wanted to hang with, I even liked her girls. But the best was her crazy Aunt Lily, and the way the narrator voiced each of the characters made it even more fun. Because Mona lived in a historical house, she also had a plumber on call to fix the numerous problems. Ben was a total hottie, and I loved how Mona would drift away in her fantasies (or scenes from her books, as he was her muse) about him. The narration would change and sappy music would play during her fantasies.

Honestly, Mona’s inner thoughts were the best part. She was an honest, down to earth mom that said the truths many might think but won’t say so they don’t sound shallow or uncaring. She wasn’t either of those, she was just honest and normal. I got so carried away with laughing at this story, that I forgot to stop and clip highlights (I thought I had more than one though, because there were so many great lines!) and I wish I could re-find a few to share here. Just know that it’s real, and it’s funny.

Better Off Without Him may be one of my favorite audiobooks. Gillian Vance, the narrator, made this fun book amazing. She was a bit more of an actress than most narrators but it never seemed overacted. Her different vocalizations for other characters were amazing. If you don’t read audiobooks, I think Better Off Without Him would still be a great fun read on kindle or print.

I loved to read about a pretty cool mid-forties mom who is hip, sarcastic, smart, sexy and funny. Mona was totally someone I would want to be friends with. I enjoyed how she took the time to test the waters, and that this book wasn’t really a whirlwind romance, but more of a chick lit book with a romance. If you like a book with older couples with kids, I totally recommend Better Off Without Him. I have already grabbed a few more audiobooks from Dee Ernst, narrated by Gillian Vance.

Purchase Better Off Without Him by Dee Ernst 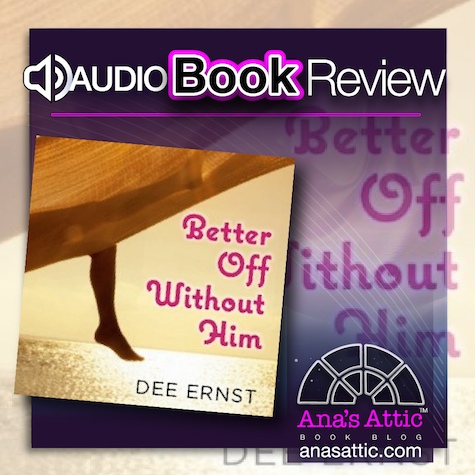