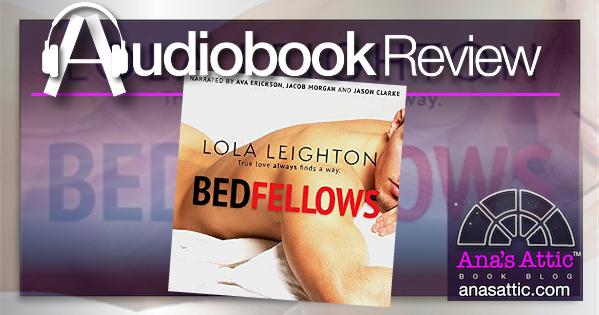 I started listening to Bedfellows by Lola Leighton when it first came out. It was a hot read so I listened before bed (if you know what I mean). Then my son came home for surgery and I knew we wouldn’t be alone in the house for 10 days, so I decided to save the book and come back to it. Lemme be frank here. If it was really gripping me, I wouldn’t have been able to put it aside.

I don’t read a lot of ménage books, but even so, Bedfellows felt like an intro to ménage reading. Will and Sullivan grew up in the system together and they were each other’s only ‘family’. They share everything, including women. But they are looking to settle down with the right girl.

Adrienne was a traditional girl from a traditional family. But when Will and Sullivan wanted to show her what they were looking for, who is she to turn down two hot, doting men?

“Both of them kissing and fondling me? It was like a gateway drug to ménage. And the bastards knew it.”

These two guys were all about Adrienne. They completely focused on her. They had rules in place so there was no jealousy. But could Adrienne handle publicly being in a ménage relationship? What would her straight-laced dad do? Would she have to choose between her family and the men?

There wasn’t really much of a compelling story here. It felt more like a quick, very sweet ménage romance without a lot of depth. I would have loved to learn more of Will and Sullivan’s background and what made them become like this. The sex was hot, but I was hoping for hotter, it was kind of ménage-lite to me.

Bedfellows was narrated by Ava Erikson, Jason Clarke, and Jacob Morgan. You can’t get much better than that. I loved the narration and absolutely think it enhanced the book. I am SO GLAD she used two different men, but their voices were SO similar I did confuse them sometimes.

Bedfellows was a good book for the new or rare ménage reader. It was sweet and romantic, and they did bring up a lot of the issues a triad might experience. The sex was hot, but not overly detailed, making it pretty mild for ménage. I put the book down halfway through because I wanted to save it for sexy times, and to be honest, it was easy to put down, But I am glad I picked it back up to finish it, because I did enjoy it. If you are looking for a sexy and romantic mainstream m-f-m (with a little m-m-f) romance, Bedfellows may be the way to go. 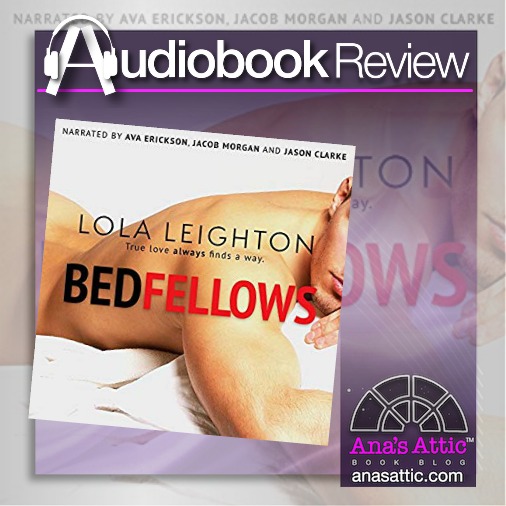