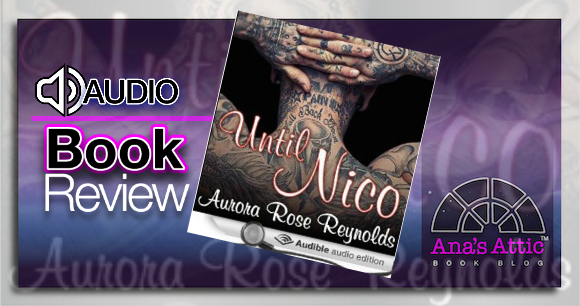 Until Nico by Aurora Rose Reynolds

Mmmmmmm…..how I love these Mayson boys! I have listened to this whole series on audio, and though I didn’t love the narrator on the first book, she used someone new for the rest and I absolutely loved them. His voice was sexy, and with quotes like this, you can’t go wrong….

You’re gonna get me, but I haven’t had your taste on my tongue for a week. I need it, so you’re gonna be a good girl and lay back and let me eat your hot little pussy until I’m full, and then I’ll give you the dick.”

One by one, each of the Mayson brothers has found their “BOOM” the girl that they see once and they know she’s the one, and their life changes. Sure, I know it’s a little cheesy, but I’m OK with that. Nico is the last of the brothers to succumb to the boom, he doubts it will ever happen to him. He’s a tattooed, pierced (yes, there!) badass bounty hunter, he doesn’t want a woman to hold him back.

Sophie is the shy school librarian. Due to events in her past, Sophie is living half a life. Afraid to go out and really live. When she gets a call from gruff guy saying he found her phone, she meets him to get it before he leaves town.

I knew the minute I saw her that she was it. How I knew? I don’t know, it was like my soul lit up.”

Sophie was at war with herself. She knew she liked Nico, she felt safe with him, but she was still scared. Nico wouldn’t let her run though.

I don’t know what’s going on in that pretty little head of yours, but know this–you run, and I will find you.”

Nico was sexy, gentle, patient and really brought Sophie out of her shell, and it was lovely to see her blossom under his attention.

Until Nico follows my favorite book formula. Alpha male finds “the one” and basically forces her to stay and make a go for it. He wins her over with sex, protectiveness, romance and just plain alpha machismo, until the one big climactic scene that he saves her from. I loved it just as much as the others in the series, but with the same narrators (who I love) they all started to blend together in my head. It almost felt like Nico needed a story, so the same formula would work, but it wouldn’t stand out; like it may have just been written to complete the series and move to Kenton’s story. On it’s own, I actually loved it. After listening to the other two right before it, I would have liked to experience something a bit more original. Still, I highly recommend this entire series, but I would suggest taking breaks between the books. ARR is a must-read author for me.

See my audiobook reviews here:
Until November
Until Trevor
Until Lilly
See the spin-off:

See Megan’s review of Until July 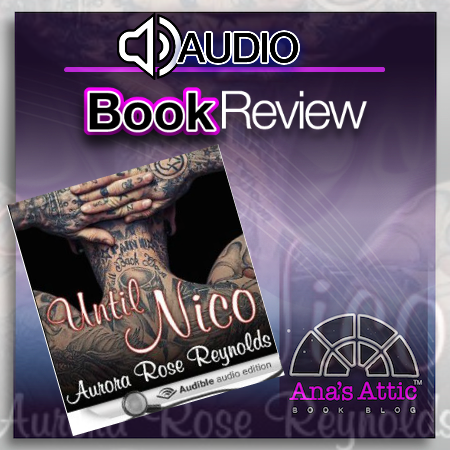