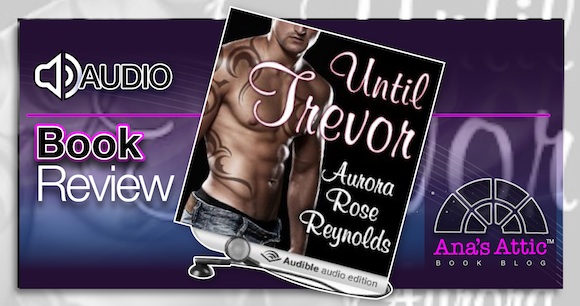 Until Trevor (Until #2) by Aurora Rose Reynolds

At the time I write this review, I had already listened to Until Lilly after this. So it has been a while since I listened to this, and I honestly don’t have a lot of detail memory. But Until Trevor deserves a review, because I LOVED it.

“She’s your boom.” He nodded in understanding.

I am listening the Until Series completely on audiobook. Until November, the first in this series, was ruined a bit by the audiobook performance, because the female narrator spoke the male parts in a horrible, very unsexy accent, even though I really loved the story. This was not the case at all with Until Trevor. This one had male and female narrators, and the male had a HOT voice, and was the same narrator I have fallen for in other books.

Until Trevor was my first male/female audiobook. I expected it to be more like a play, but it wasn’t. She read the chapters from her POV, and he read his. So when they did have to quote the other one, they did have to change their voices for the male/female parts. I was totally OK with this, and it worked great.

We met Trevor and Liz in Until November and we watched them get closer. But when they got super close, Trevor assumed he was corrupting her innocence and totally pulled away, breaking her heart. Now that some time had passed, and other guys are showing interest, Trevor realized the error of his ways and chases them all away. He can’t get his mind off of Liz, but he knows he totally, royally fucked up.

I’m going to be your best friend.”

Good try, but he lets her know pretty quickly that he wants more.

This is going to happen.”

“What?” I ask, my eyebrows drawn together in confusion. His finger comes up and skims down the center of my face, forehead to chin.

Yup, Trevor is a perfect sexy alphahole. And as much as Liz protests, she wants him just as badly. But she isn’t willing to risk her heart on him again. I love that Liz had a backbone and gave him shit. Even more, I love that she is a reader!

All my life I have been reading romance novels. Those stupid books ruined me. I’ve always wanted that fire that every book I ever read talks about.”

I love this series, because when an alpha Mason brother falls, he falls hard….

Jesus. I love you so fucking much; you would think I was growing a vagina.”

I was listening to it in a hotel while I was in the shower so it was pretty loud. Let me tell you, I hope there were no kids nearby, because holy hell! Aurora can write HOT!

The audiobook narration was my favorite of any audiobook so far. Trevor was completely sexy, and a total alpha. There was great, hot sex, wonderful secondary characters, and a completely likable heroine. While I didn’t love Trevor as much as the other brothers, I still thought he was pretty great. But Cash, sigh…well, my review for that one comes later this week.