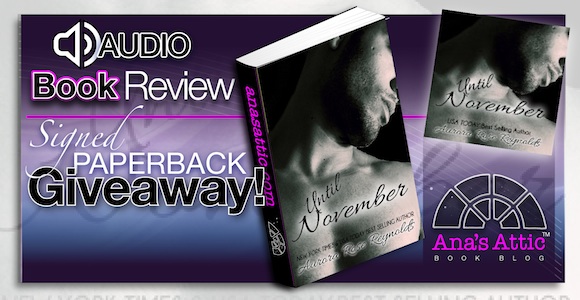 Until November by Aurora Rose Reynolds

Contemporary Romance. 1st in a series of interrelated Standalones.

When Megan tells me I HAVE to read a book, I always listen if I can. We have the same taste, and she has never steered me wrong. I didn’t listen to audiobooks a lot when I started this one (I just started to listen a lot more though) but even though I have the Until Series Box Set, I knew I was meeting Aurora Rose Reynolds at a book signing in Tampa (she will be at Wicked Book Weekend also), so I started this on the 4 hour drive to Tampa.

I can’t believe how fast the drive went!

The last audiobook I read, the breathy narrator got on my nerves, so I was thrilled when I really loved the more down-to-earth normal narrator for Until November. And then she started speaking Asher’s voice also…ugh, totally ruined his sex appeal with a really strong country accent. I tried to overlook it, they were from Tennessee after all,  but I think Asher just lost some of the sex appeal he would have had if I just read the book. I am going to try to separate my review into the story and the audio, because I honestly think I would be totally in love with Asher if I had not ‘heard his voice’.

Until November begins with November (yes, that is the heroine’s name) and a big dog that rescued her from being attacked in an alley in New York City, where she grew up with her horrible mother from hell. She thought she was unloved and unwanted, until she found out as an adult that her father wanted her all along. November had just found her fiancé cheating (wait till you see with whom), she was attacked, and she knew it was time to go. So she packed up her new dog, Beast, and everything else, and headed down to Tennessee to be the bookkeeper for her father’s business (which she did not realize was a strip joint!)

The most beautiful man I have ever seen is standing a few feet from me.”

After a pretty funny meeting (Asher was a dick), Asher and November found themselves thrown together in a few situations. And when it turns out November is in danger, Asher pulls an ‘Alpha Male’, and forces her to live with him for protection.

If you are not a fan of instalove (I am, it happened to me almost 28 years ago and we are still together), this is not the book for you. But if you are a fan of hot, alpha men who take what they want and appreciate it when they have it, well this is the book for you.

What did I tell you, son?” he says, looking at Asher. “When it happens—BOOM!” He makes a motion with his hands of an explosion.”

“So the Mayson curse is real. Fall in love on sight and all that bullshit.”

Asher was one of a bunch of hot brothers that the whole series is based on. All the girls in town want him, and most have had him. He is a major player, but November changes all of that (of course). He suddenly becomes completely alpha possessive, protective and bossy (YUM.)

When he tears his mouth from mine, he moves his lips near my ear and whispers, “You’re mine. Every inch of you belongs to me. From your sweet mouth to your even sweeter pussy and when I want it, you better give it to me.”

He let her know whats up right away, no games.

I realized yesterday that I needed to stake my claim before some stupid fuck got to you. That’s why I did what you called ‘kidnapping.’ I like to call that ‘securing my future.’ We’re going to see where this goes, November, and while we’re doing that, it’s not going to be casual.”

If you like Kristen Ashley books, this is a great “what to read after” series. It felt similar to the Rock Chick series but with totally hot sex. (To, me, this is a huge compliment, though nobody can live up to Kristen). It has a bossy alpha who needs to protect his woman, a sassy female you love, a little danger and action, and hot sex. Plus, an awesome epilogue. Seriously, my kind of book! 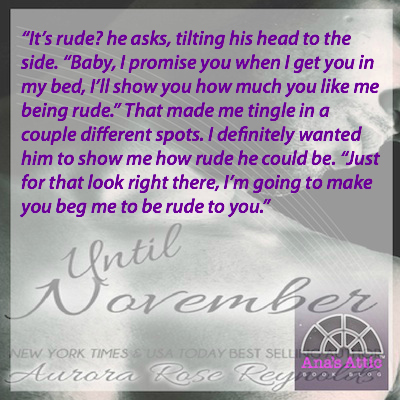 Besides being a delicious, dirty talking alpha, Asher knew what he had, and let her know at all times.

It’s amazing”, he whispered, “to know that my purpose in life is sitting in front of me.”

Until November was totally my kind of book, with an uber-protective alpha, great sexy times, lots of romance, funny lines and a great epilogue. There were a few little issues with timing, or shall I say, skipping time, and I really didn’t like the way the audiobook narrator vocalized Asher’s parts. I have spoken with Aurora, and she says the next audiobook will have both male and female readers. But I’ll tell you, I can’t wait that long for Trevor. I need to continue with this series in e-book form, because I really love it!

All I have to offer you is stability and love. I have nothing else. If you left me tomorrow, some other guy would be there giving you the same thing I do. You’re beautiful, funny, smart, kind. And the sex, fuck me, sex with you is off the charts. If you left me—Christ!” He closed his eyes, shaking his head. “If you left me, I would never be able to find another you. Someone who fills my life with the beauty that only you give me.” 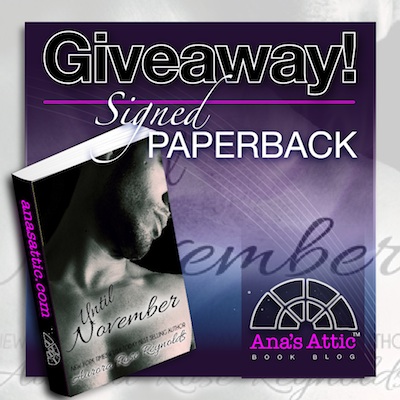