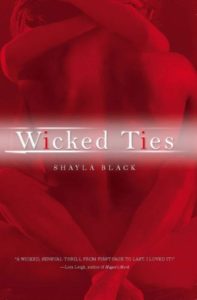 I found Wicked Ties (Wicked Lovers 1) by Shayla Black on so many lists of top BDSM romance books that for the sake of the blog, I decided to bite the bullet and spend the $12.99 for the e-book, a ridiculous price for the first in a series. At least get your readers hooked before raping them out of their money! Or stand up to your publishers like one of my favorite authors, Jeaniene Frost did, and fight to lower e-book prices. The paperback was $5.99. Really? The e-book is more than double? In what world does this make sense? This makes me love my indie authors even more. OK, rant over.  Because I found this on so many lists, and because I spent more than $10, I expected this to be awesome. It was just good. 3.5 stars for story, 5 stars for heat. ( I would have rounded my stars up if not for the price).

Jack is a Dom and bodyguard Morgan is interviewing for her cable show about sex. Jack actually has ulterior motives for meeting her–to get her into bed to get back at who he thinks is her fiance, for sleeping with his ex. Morgan has a stalker who takes a shot at her while she meets with Jack. Jack immediately feels protective and takes her back to his cabin in the swamp to “protect” her. While there, he gets her over all of her emotional baggage and hangups that she had about sex, and makes her a perfect submissive.

This book took me a few days to read. That is rare to me. If I really love a book, I can’t put it down. I just didn’t have that intense connection I get to other books, like any of Cherise Sinclair’s or Kristen Ashley’s books. Morgan kept whining to herself about how she knew she wanted to submit but she didn’t want to be a freak. It got a little old. I kind of wanted to kick her and tell her to live it up with a real Dom while she can. Jack also didn’t handle her concerns very well, and was kind of a prick at times. Deke, Jack’s partner and best friend joins them in a scene that was knock-your-socks-off HOT. I like Deke a lot, but read that he turns into a dick in the next book, so I think I’ll hold off on spending my $12.99.

Things I didn’t like:
-e-book price
-lack of connection to the characters
-Jack’s vendetta–it almost seemed unnecessary, but it was a huge part of the story. I would have liked it better without that part.
-Morgan’s self-whining
-It could have had a little more backstory, or just story in general.