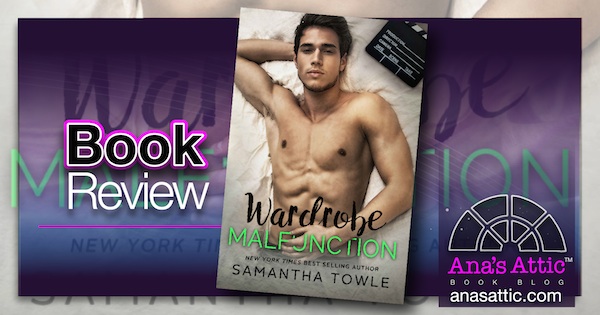 I have to admit, I love a Hollywood romance. You know, the kind when the movie star falls for the regular girl. It’s a trope that’s been done a lot, but since Samantha Towle brought me one of my favorite Rock Star Series, I figured she could do the same with a Hollywood romance, and I’m so glad I was right. Wardrobe Malfunction was everything I love in a book! I gobbled it up from start to finish.

After finding out on live TV that his girlfriend was cheating on him with his best friend, Hollywood heartthrob Vaughn West has been on a downward spiral of booze and women. He was the good boy of Hollywood, but is seriously ruining his reputation. When the movie role of a lifetime comes up, he knows he has to clean up his act, and swears off women and drinking.

Charlotte Michaels (Charly) is a feisty young dress designer who gets the opportunity to work as a wardrobe assistant on one of the hottest movies in Hollywood. And it turns out she will be dressing her movie-star crush and star of all her fantasies, Vaughn West.

“Where do you want me?”
Is that a trick question? I cough. “Just over here, please.” He walks toward me, and my vagina thuds in time with his footsteps.

That first fitting didn’t go so well, after being caught twerking, her next mistake was even worse.

The first meeting was hysterical. Vaughn was a bit of a dick, but he was trying to fight the attraction he was feeling for the woman who has pins way too close to his crotch…a women that can ruin his vow of celibacy.

“This woman, whom I’ve known for less than a day, who stabbed me in the ball sack, has made me a cock warmer.”

But Charly was feisty, and I loved their banter. While there was instant attraction, there was no instalove. They became friends first.

“I know this is how it’s always going to be with Charly and me. And I like it. I like the challenge she gives me.”

While Wardrobe Malfunction is classified as a romantic comedy, it was never silly or over the top, and there were some very serious scenes as well. There were also some super HOT scenes!

“And the King of Hollywood spends the next thirty minutes making me come with his mouth and then fucking me from behind like I’m a whore, but the whole time, he still manages to make me feel like a queen.”

I love how his family treated him like a normal guy, and he never seemed to think of himself that much different.

“I’m just a normal guy who’s in love with an extraordinary girl.” 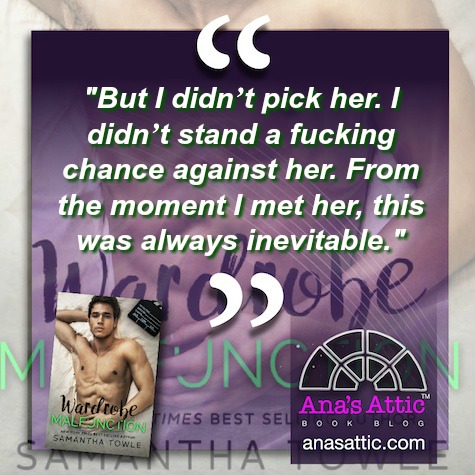 Wardrobe Malfunction by Samantha Towle was so good! I read the entire book with a goofy smile on my face because it was filled with all of my favorite things in a book. I laughed, smiled, swooned, got angry, and wanted to be friends with the characters. It had humor, banter and chemistry, and I think I read it in one sitting. I love when a Hollywood star falls for the regular girl, and Wardrobe Malfunction had a cute twist to the trope. If you are looking for a light, sexy and fun Hollywood romance, I highly suggest you check this one out! Samantha Towle never disappoints. 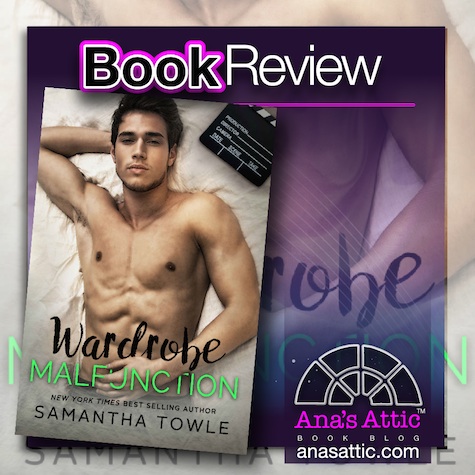