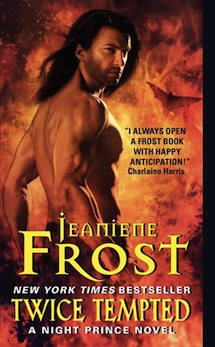 I Love Cat and Bones. The Night Huntress Series by Jeaniene Frost is still one of my favorite all-time series. Vlad Tepesh (Dracula) is a character from the Night Huntress Series who I loved and couldn’t wait for his story. Once Burned (see my review here) was the first in the Night Huntress spin-off series, “The Night Prince Series”. I was so disappointed in the first one (even though I still liked it), mostly because of the abrupt ending. Luckily, Twice Tempted, the second in the spin-off series was much better, and didn’t leave you in such a cliffhanger state.

“You should be afraid. Very afraid. Before, I told you if you wanted to end things between us, I would let you go, but, Leila”–his voice deepened–“I lied.”

Twice Tempted ends right where Once Burned ended. Leila’s psychic powers have been failing her for weeks because Vlad’s aura coated her, made her fireproof and blocked her abilities. She feels useless and frustrated. Add to that, Vlad won’t tell her the three words she needs to hear, and she decides to leave and head back to Marty and the carnival.

The vampire Maximus, Vlad’s friend, follows her. After she is almost killed, Maximus convinces Leila that Vlad may have tried to engineer her death, and she believes him. But when Vlad finally tracks her down, he lets her know where it’s at.

“No one feels like you do, so every brush of your skin is a cruel reminder of what I’ve lost. I can barely stand the sight of you because you’re more beautiful than I’ve allowed myself to remember, and when I cut that wire off Maximus and smelled you all over him, I wanted to kill him more than I wanted to kill anyone in my life yet I couldn’t because of my promise to you.”

Well I must say, I had NO complaints about the make-up sex!

I still miss the Vlad from the Night Huntress novels. Ruthless and funny, this Vlad seemed like a watered-down version of the Vlad I loved in the original series. Though he had a few snarky lines, I didn’t get that sexy, sarcastic  feeling that has incited tingles before.

“Fourteen hundred and thirty-one.”
I blinked. “What’s that?”
“The year I was born, which is not, as you’ll not yesterday.”

“Vlad made a sound too harsh to be a growl. “You won’t be satisfied until you’ve brought me to my knees, is that it?”
“Why not?” It shot out of me with all the recklessness of my still-broken heart. “You brought me to mine.”

But the book still had a lot of the excitement and danger and great sex we love in Jeaniene’s books.

I love Jeaniene Frost. She is still an auto-buy author for me. While this series is a little disappointing to me, I am still really enjoying it. I just don’t have that “supercouple” feeling from this series. But I look forward to reading the last in Vlad’s trilogy, and I do hope we don’t have to wait another full year for it, but at the rate it’s been going, it may be more.

“If you introduce yourself to anyone as Mrs. Dracula, I’ll bite you in a manner you won’t enjoy.”

See My Review for Once Burned (Night Prince 1)

***News from Jeaniene Frost is that Up From The Grave (Night Huntress 7) is now pushed to the end of the year! A whole year late!!! Well, I guess that’s better than her not putting out her best work 🙁