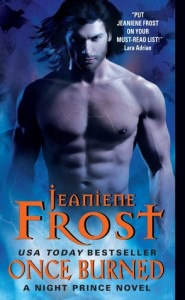 I have been looking forward to reading Once Burned by Jeaniene Frost for so long, before I even knew she was going to write it! Vlad was always a favorite character in previous books, and when she put an excerpt in her last book, I was HOOKED!!! And puleeeeeze…..look at that cover! How can you not want some of THAT?????

This is the first book in a new series (Night Prince) by Jeaniene Frost. Her Night Huntress series is my absolute favorite all time book series, so I expect a LOT from her books. Vlad (yes, Vlad the Impaler), Vlad Dracul — get it? Yes, he is THE DRACULA. (But don’t ever call him that). Vlad was in the Night Huntress books and I always loved him, but now he gets his own series. You do not have to have read her other series to read this, but I am sure it will help with your enjoyment of the book. Especially when Cat, Bones, Mencheres and Kira come visit. (I loved that and squeeeee’d the whole time)

Leila, aka Frankie (short for Frankenstein) was hit by a downed powerline when she was a kid. She lived, but not without terrible damage. Besides a huge scar that extends from her temple to her wrist, her body-especially her right hand, gives off electricity and she can incapacitate or kill a human if she touches them. Another side effect is psychometry. When she touches people or objects that people are attached to she can see past, present and future connected to the objects. Frankie avoids situations with humans and works in the circus with a dwarf vampire. She can even kill a vampire if one touched her for too long, so Frankie is very inexperienced in life, love and relationships.

When Frankie saves a woman from being murdered because she saw the future, she gained unwanted attention especially from the undead world, and was kidnapped by some bad vampires who wanted to use her as a tool to find Vlad and kill him. But when she connects to Vlad, she is surprised to find him connecting back! Vlad is one of the most powerful vampires ever. His ability to channel and control fire (and never burn himself), read minds and fly is unique among vampires. But a past heartbreak has kept his heart locked up tight……maybe Frankie (Leila) can set it free!?

At 352 pages, this seemed short to me. I LOVED the beginning, and couldn’t out it down. When characters from the Night Huntress world popped in I was grinning like an idiot. The build up was delicious. Leila and Vlad danced around their attraction and it was totally hot. Leila was completely inexperienced (of course! She couldn’t touch anyone) but Vlad can’t burn from electricity, so he was perfect for her.

“That one tickled. If electrocution is your way of flirting I commend you for your originality”

Leila stood up to Vlad like nobody ever had, so she was perfect for him too. His arrogant knowledge that he would be the one to be in her bed was totally hot, and his possessive knowledge that she would be his made me wish I was her! Plus, how much more alpha dominant male can you get than Mr. Powerful Undead Prince anyway?

The first half of the book was a total 5 star read for me. The second half, however, was a 3 star read. They stopped dancing around each other a bit, there was more action (which I love) but less connection. And when the book ended, I had to go on line to make sure I wasn’t missing pages! The ending was so abrupt and unsatisfying, and the fact that the second book is still a year away made me move my rating all the way down to a 3.5. The idea of me not giving 5 stars to a Jeaniene Frost book is abhorrent to me, but the second half of the book and the ending really disappointed me. Maybe I expected too much. Maybe if I read this again when the next comes out I will change my rating. But to me, this is half a book, and left me unsatisfied.

Don’t get me wrong. I will grab the next book the day it comes out, and anything else she writes, but this story, especially the second half, didn’t live up to what I hoped it would be. It felt like Jeaniene had a deadline she had to make, and cut off the book halfway.

Purchase Once Burned by Jeaniene Frost