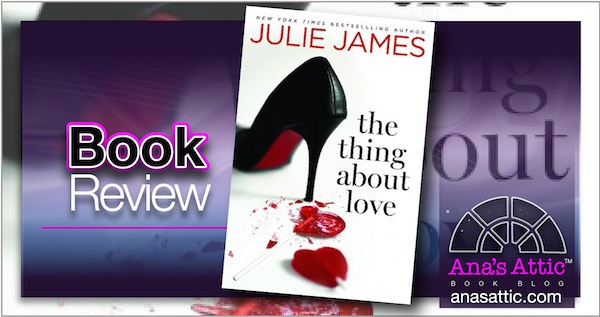 The Thing About Love by Julie James

I read a few of Julie James FBI/US Attorney series about 5 years ago, and remember enjoying them, so when I saw she had a new FBI book this month, The Thing About Love, I grabbed it and I’m glad I did. It doesn’t seem to be related to the series, as it is a total standalone, but clearly, this is her specialty.

Jessica and John were in the same FBI training class, and they totally clashed. They were both highly competitive and a thorn in each other’s side the whole time. Luckily, after training, they moved to opposite sides of the country. 6 years later, they are paired together to work undercover on a white collar crime case.

“Nearly fifteen thousand special agents in the FBI, spread throughout the United States in fifty-six field offices, and she had to show up in Chicago for what was quite possibly his last undercover assignment.
As his new partner.
And here he’s thought HRT tryouts had been hell.”

Both of them are just getting over long-term relationships, plus John is getting ready to ship out to join the elite hostage rescue team. So when the nasty banter turns to flirting, and then genuine respect, and then sexy times, they both know it’s just a fling.

At first I really didn’t like Jessica. She had a major chip on her shoulder, and hated John for no reason except the fact that he was good at everything and she was jealous. But I warmed up to her, and liked her by the end.

“Do you know how long I’ve waited for you to look at me this way?”
She assumed he was teasing her. “What are you talking about? You didn’t even like me for most of the time we’ve known each other.”
He bent his head before turning to go, his voice low and confident in her ear. “Or maybe I’m just that good of an undercover agent.”

I feel like there may have been almost too much research for this book and the author felt like she had to put it all in. It was more about the FBI inner workings than it was about the relationship, so I kept waiting for some big climactic scene, and there never really was one. I guess I expected a little more adventure in an FBI book where the hero is portrayed as almost a super hero and the heroine is a tough girl who can take down a man double her size. 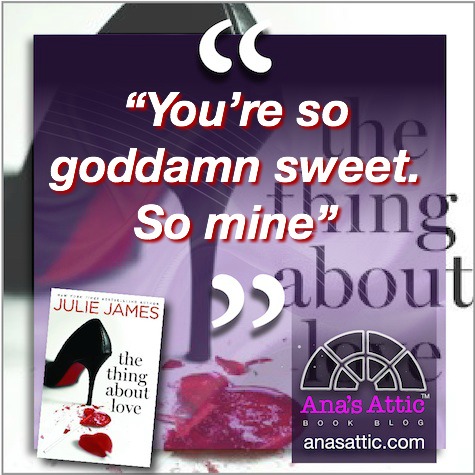 The Thing About Love is a fun and sexy enemies to lovers romance. With both of the main characters being FBI agents, and one being constantly compared to a superhero, I expected to see a little more action and adventure where we see the superhero skills put to use. But sadly, this never happened. I enjoyed the book from start to finish, but never felt that gushy love that made me want to scream about it from the rooftops. There was a lot of FBI inner workings, a lot about the white-collar, non dangerous case they were on, and not quite as much about the relationship they were developing. Still, I was in a reading slump, and this broke it, so I really enjoyed the story, I just wanted a little more in every way.

Purchase The Thing About Love by Julie James 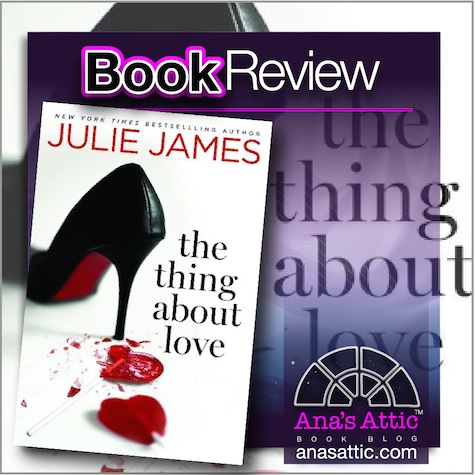