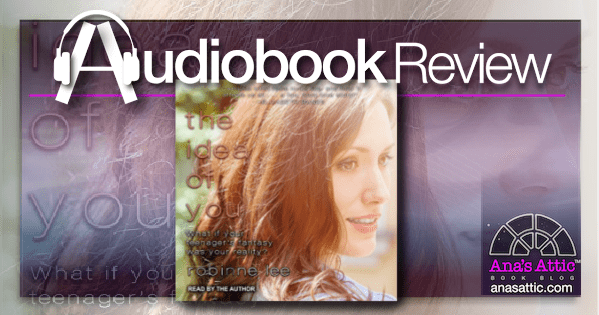 The Idea of You by Robinne Lee

Narrated by the author.

SUCH. MIXED. FEELINGS! I have had the audiobook of The Idea of You by Robin Lee on my phone for a few years after almost every blogger I know RAVED about it. There was always a new book out, and despite all the glowing recommendations, I just never got to listen. I finally made the time.

The Idea of You is narrated by the author, which is usually my favorite because they know exactly how it should sound. But I think it was mostly the narration that took away from the book for me. I can usually review the book itself despite the voice acting, but in this case, the almost haunting narration just made me feel sad the whole time.

I may stand 100% alone on this because I have heard SO MANY people say that her narration made it even more special, but for me, there was something about the way she read the story that just had me kind of depressed, even during the sweet and light moments. Perhaps it was the inherent hopelessness of the story, but I think the narration was my biggest roadblock.

Solène, a 39-year-old divorced mother, got roped into chaperoning her 12-year-old daughter and friends to a concert and meet and greet with the biggest boy band sensation in the world. Hayes Campbell, the 20-year-old pop star and member of the band, was immediately drawn to Solène, despite the almost 20 year age difference.

“So this is what twenty looked like. That sweet spot between adolescence and the moment things began to unravel.”

I adored Hayes. He was mature beyond his years, an old soul, and he was smart, sensitive, and the kind of guy who falls hard, not a playboy. Solène hasn’t even dated since her divorce, though her ex moved on a while back. So when a gorgeous, sweet, charming boy with a British accent wants you, he’s kind of hard to say no to.

“The thought crossed my mind that this could be dangerous. Not the ill-advised sex with the just out of his teens pop star, but the cuddling. The lying there, drinking in his scent, watching his chest rise and fall, allowing myself to bask in my own happiness. I could fall in love this way.”

The romance involved a lot of sneaking and hiding. Solène’s daughter fancied herself in love with the star, making it even harder, knowing she was breaking her daughter’s heart. But the passion between the couple burned bright—when it was just them. Sadly, Hayes belonged to the world, to the paparazzi, his fans, his band. And when the world catches on to their romance, the tabloid scrutiny is almost unbearable.

It took me a while to get into The Idea of You. But once I finally did, I was hooked. The problem is I never 100% warmed up to Solène. I often found her snobby and pretentious, big on name-dropping both the people she knows and the brands she wears. But the story has stuck with me, and though I listened a month or two ago, I feel like I remember every word, versus a book I just listened to twice and can’t tell you a thing about, despite my enjoying it.

So I’m torn. I considered DNFing many times at the beginning and middle of this. It just felt slow and sad. In fact, I took two breaks, listened to other books, and came back to it. But now, many weeks later, I can still hear it playing out in my head. It really stuck with me, and the second half had me captured. 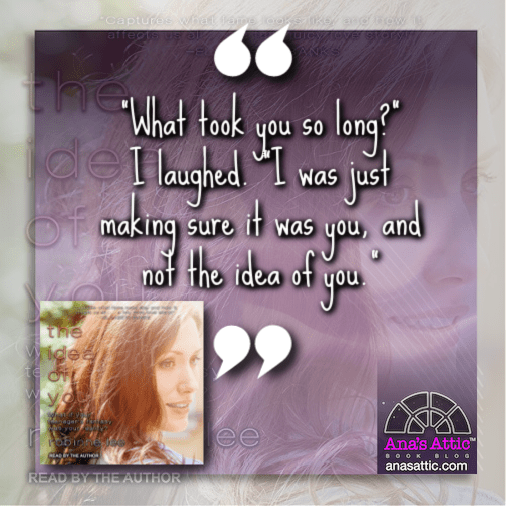 I actually bought this book for the narration. I had heard so many fabulous things about the actress/author narrating her own book. But for me, the narration gave off a sad vibe right from the beginning and just put me in a sad, melancholy, emotional mood from the start, even during the light and fun moments. There just always seemed to be a sense of foreboding. However, I loved the way she did Hayes!

Way back in 2017, The Idea of You by Robin Lee was on almost everyone’s Best of the year list, so take my review in with others. This was one of the most often recommended audiobooks to me because it is narrated by the author. For me, it was just OK. I likely would have DNFd if it wasn’t for the number of recommendations I have had, and I am glad I kept with it till the end. The narration style made me feel sad and hopeless from the beginning and I never warmed up to the heroine which is usually what I need to fall in love with a book. But I loved “the idea of it”—a young boy band member falling for the mom of a fan. I just found it kind of slow and sad, yet still well written.

Purchase The Idea of You by Robinne Lee 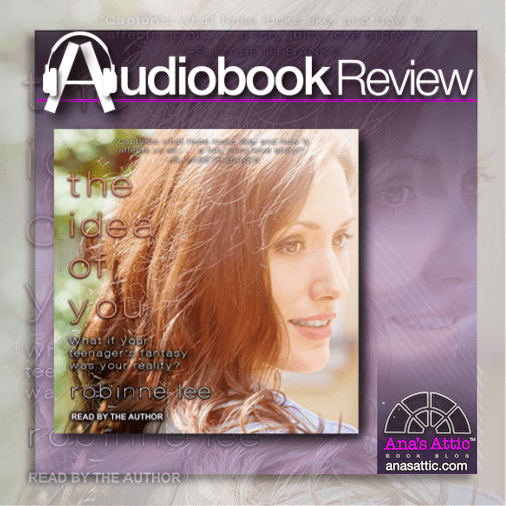