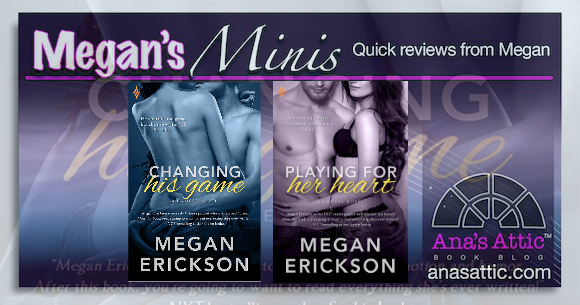 The Gamers Series by Megan Erickson

I absolutely do not understand how Megan Erickson has coasted under my book lovin’ radar for this long. Her books are right up my alley. I was recommended this series by a book buddy who told me I would fall in love with Megan’s work. She was not wrong. I gobbled up Changing His Game in a matter of 2 days…and honestly, if it weren’t for the holiday weekend, I would have totally taken this book down in one sitting.

Austin Rivers…oh my… Austin is an introverted gaming nerd. One very HOT and successful introverted gaming nerd with a kinky streak. But he is also a loner, keeping completely to himself, with the exception of his best friend and his best friend’s daughter. He’s been hurt, deserted, and taken advantage of by the people he should be able to trust the most. Relationships are not his gig…because being in a relationship would require placing his trust in someone else’s hands. And he just can’t let that happen…until he gets a little dose of Marley Lake.

Marley is one of the few females in her profession. She is the head of the copy editing team at Gamers, a gaming magazine. In the predominantly male field, Marley works her arse off to be the best she can be. One late afternoon at the office, Marley was in need of IT help due to her computer freezing up on her.  To her surprise, her rescuer is none other than Mr. Gorgeous, Dark, and Brooding… a man she had seen around, but not often. He quickly works magic on her computer but when he pulls up her last internet page…oopsie! Marley had been perusing her Tumblr page. Both of them stared at the screen as the black and white gif played over and over again on repeat.

“A woman in a black lace bra and black thong with a garter belt and thigh highs stood in front of a mirror. Her head was thrown back, resting on the shoulder of the man behind her. He was shirtless and in a pair of suit pants….his hand was wrapped around her throat and the other dipped into the front of her thong. Over and over again, on a loop, his hand slipped beneath the lace, a teasing stroke, as the woman’s mouth opened in a silent ‘o’…”

Oh….My….God…. from this point forward, the beautiful push and pull of two people who feel they shouldn’t be together ensues. This book is chocked full of what I consider the three essentials of a good book: heat, humor, and heart. And Austin and Marley’s story has an abundance of all three.

If you enjoy reading a low angst storyline with a high dose of heat, this is an absolutely PERFECT read! I enjoyed it so thoroughly! After completing Changing His Game, I IMMEDIATELY picked up the next book in the series, Playing For Her Heart.  Megan Erickson has secured a new loyal reader. I fully intend to binge read all of her books!

Rating: 5 stars for storyline and 5+++ flames for heat!

Book 2 – Playing For Her Heart by Megan Erickson

Playing For Her Heart is the second in the Gamers series by Megan Erickson, and it was one seriously steamy read. I mean smokin’.
We met Grant Osprey in the previous book of the series. He is Austin Rivers’ best friend and business partner. He is also a single dad to his 14 year old daughter. I knew I was going to swoon over this guy, and swoon I did.

And Chloe, sweet Chloe. This girl pulled at my heart. Stuck in a shell….unable to see all that she had to offer the world. She saw herself as boring and socially awkward. Her only release was cosplay….role playing…stepping into  persona that allowed her to be brave. And this is how she meets Grant.

I simply LOVED this book. And I’m not going to lie, this was one of the steamiest books I’ve read in a while. The role playing….holy god…the role playing…F#CK HOT. It was a unique element to the storyline and played perfectly into Chloe’s inner turmoil.

“I’ve been thinking about this, about marking you.” The possessiveness he’d thought about earlier flared and he couldn’t stop the claiming words rushing out of his mouth. “Push that ass toward me, sweetheart, I want to see it.” He only had to roll his balls with his other hand and listen to the wet sounds of his hand stroking himself, and then he was coming, shooting all over her bare ass, watching as his release streaked her red skin white.”

Wheeeewwwwww! Is it hot in here?

Overall, a FANTASTIC read. Perfect blend of heat, humor, and heart. I just love the characters in this series. I want to be their friends! And I’m totally salivating for Ethan’s story!

Purchase Playing For Her Heart by Megan Erickson

Signed Paperback of either of these books is up for grabs (US only) Just share this image on Facebook or instagram (and tag me) to enter. 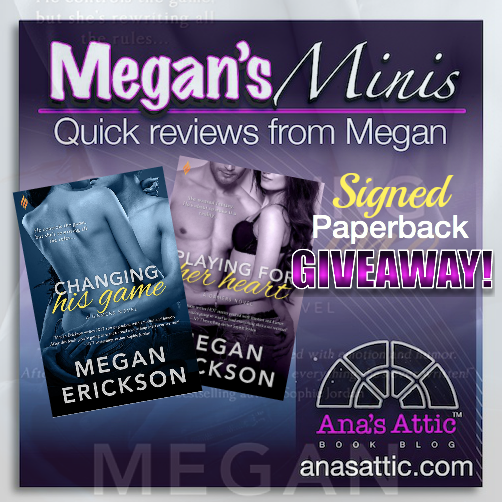