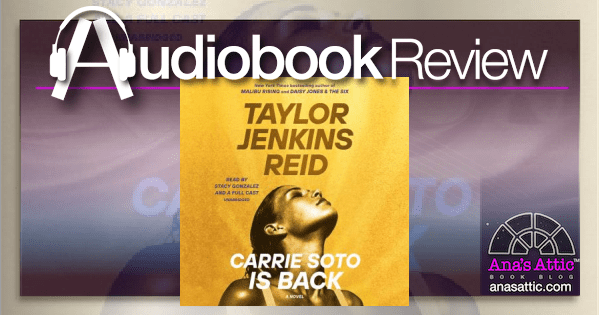 Carrie Soto Is Back by Taylor Jenkins Reid

Narrated by Stacy Gonzalez and a Full Cast

Standalone with some crossovers from other TJR Novels

I usually wait at least a week to review a book to see how it settles and how memorable it is, but I just need to tell everyone about Carrie Soto is Back by Taylor Jenkins Reid. We met Carrie Soto briefly in Malibu Rising, but it is not necessary to read that first. There are some mentions of Daisy Jones and the Six as well as a crossover mention from The Seven Husbands of Evelyn Hugo but they do not play into this story at all.

This book is about tennis. I am not a tennis player, nor am I a tennis fan (though this book might have changed that), and I tend to not pick up sports romances unless they are by a favorite author. Carrie Soto is Back is literally ALL about tennis, with play-by-plays of the game. There is some romance, and there is a strong family story, but the tennis was what made it unputdownable, even for a non-tennis, non-sports fan like me.

“Every match you play, you are one match closer to becoming the greatest tennis player the world has ever seen. You were not born that person. You were born to become that person.”

Carrie Soto was born to play tennis. Her dad was a big player in Argentina before moving to America where he lost his wife when Carrie was young. I absolutely LOVED Javier and his love for tennis and his daughter. Growing up, they were single-minded in her tennis training. She was brought up being told she will be the greatest tennis player in the world, and she and her dad worked her whole life to make that true.

“Good is the enemy of great.”

Carrie was known as “The Bitch” or “The Battle-ax”, and I think this was written so well, because although she was these things, we were in her head so much, we know that she just never really learned to have social skills. Her whole life was tennis-focused without a mom or even friends.

“No matter how good I was on the court, I was never good enough for the public. It wasn’t enough to play nearly perfect tennis. I had to do that and also be charming. And that charm had to appear effortless.”

Carrie retired holding several records, but 6 years later, when her record of most Slam wins is threatened, she decides to come back to hold onto that record. She’s 37 and there are 18-year-olds playing. The game has changed since she played—shots are harder and faster, and her knees have sustained a lot of damage. Can she do it with Javier’s help?

I was on the edge of my seat the whole time. Taylor Jenkins Reid somehow made me root for this unlikeable woman who I kind of loved at the same time.

Carrie Soto is Back was very different than other TJR books—it’s kind of crazy how she changes the writing styles and story devices for every book. This was a very straightforward, first person story and it kept me up all night.

Things I Would Have Liked More:

The author is white writing a Latina woman. Carrie also had a Black manager and an Asian rival. While I loved the diverse characters, I mention this because I know that some people will not like that.

OHMYGOD. The narration was FANTASTIC. Stacy Gonzalez was definitely a part of why I loved this book so much. You would totally think it’s a duet because her Javier was so good that I was able to picture him. All of the different sportscasts with intro music done by all different voices including some tennis greats just added to the already phenomenal listen. I highly recommend listening to this one. In this case I don’t think I would have loved it nearly as much reading it over listening, because the listen was such a big part of the experience.

I’ve never written a review so fast. This all poured out of me because I am still blown away by the fact that this non-tennis fan loved this all-tennis book so much. This was a great way to round out “The Famous Four” (Daisy Jones, Evelyn Hugo, Nina Riva from Malibu Rising & Carrie Soto), and though nothing can beat Daisy Jones for me, Carrie Soto comes close. I loved that Carrie Soto is Back tackled so many issues women in sports face, especially women of color. This powerful story really illustrated the costs of greatness, and the sacrifices one needs to make in order to make it to the top. Carrie Soto is Back is a book I shouldn’t have loved: I don’t like sports and I insist on loving the heroine. But I grew to love her and the tennis kept me on the edge of my seat.

Carrie Soto is Back is for sure going on my 2022 Favorites list.

Carrie Soto Is Back by Taylor Jenkins Reid

Though not technically a series, these books all cross over to each other in small ways. You don’t have to read them in order, but Evelyn’s 3rd husband crosses over into all of them as well as some other characters. (Evidence of the Affair is a short story with a quick mention.) 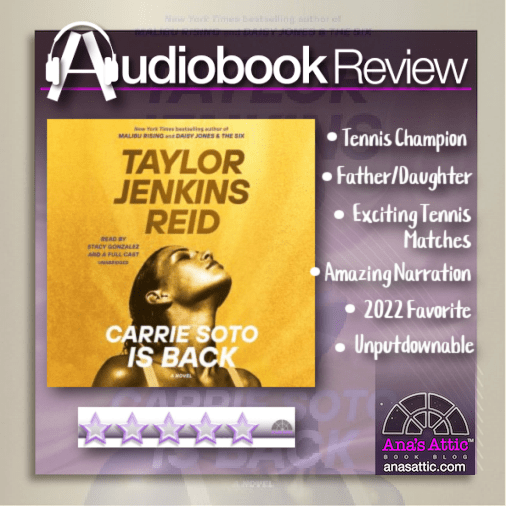