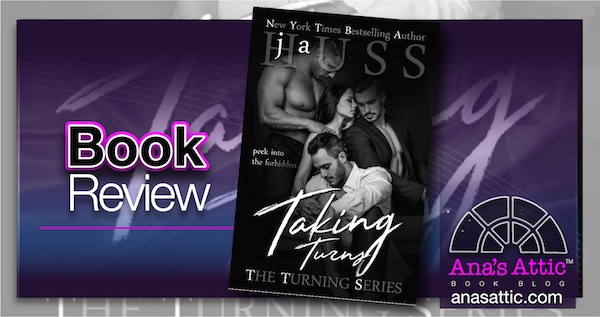 Let me preface this by saying that this isn’t a book I would have picked up on my own. I love the 3 guys/one girl theme, but I’m not really a dark and twisty girl. I didn’t read the blurb, just listened to my friend and saw 3 hot guys and a girl and expected delicious smut, but she did tell me there was a lot of emotion.

“You exist to play the game of Taking Turns with us. And you agree to try to make us happy in all ways, at all times.”

Smith, Quin and Bric play a game called Taking Turns. They have a woman that they all share. They each get two nights a week of her alone, but when they are all together, there are no rules. For the last three years they have been sharing Rochelle. But she has suddenly disappeared and Marcella (Chella) has taken her place.

So we start with a mystery. Who is Chella? Where did she come from? Why? And what happened to Rochelle? Two of the three men were ready to move on anyway so they easily invite Chella to be the new player in their quad game.

“She likes the forbidden world we live in. And she wants to be a part of it, whether she realizes it or not.”

You would think it’s all about the sexy times, but it wasn’t at all. (to tell you the truth, I wouldn’t have minded more!). And it took a good portion of the book to uncover the rules of this game. 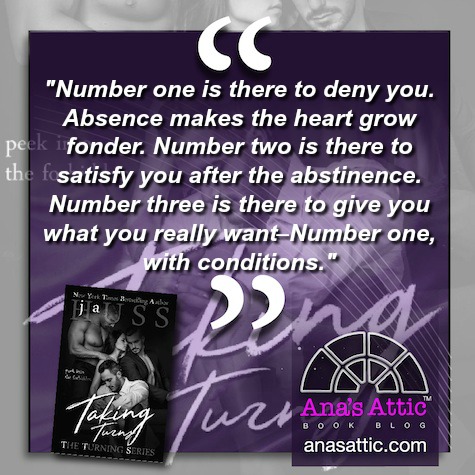 There are some important rules to the game.

“Because if I fuck you first without the other guys involved, then you’d be mine and not ours. And I’m more interested in ours than mine.”

The three men help run an underground, very high-end swingers club in Denver, and set Chella up in an apartment upstairs. But she is never allowed to go to the club. She is theirs only to share.

“I watch, fascinated by the world they’ve created here in the middle of downtown Denver. A secret world. A forbidden world.”

The three men are very different.

“Number One is mostly silent. He watches me with them very carefully. His gaze never wanders. His interest never wanes. Number Two is mostly gentle. But it’s the other side of him I like best. The wild side. Number Three is mostly reserved. He refuses to cross the line. Even when I beg.”

But Chella likes them all. But what happens to the game when relationships form? Emotions get involved?

I should have known from the title, Taking Turns, that I wouldn’t really get major gang bangs the whole time, but there was one, and it was HOT.

I must admit, I finished this, messaged my friend and said “What the fuck did I just read?” It was so twisty-turny, and there were so many questions that to me it was more of a darkish mystery than anything. But now, a few days later, it’s finally sinking in, and I can’t stop thinking about it.

“I leave her like that. All hot and wet. All ready for more. She will come to understand what this offer is. And even if it’s not her brand of forbidden, she will stay. At least for a while. I know addiction to the dark when see it. And she’s a junkie. “

I’m still a little lost for words on Taking Turns. There are so many twists and turns, and it took a good portion of the book to figure out how the game is played. There is hot kinky sex, but rest assured, this IS a romance, and the sex doesn’t overpower the story at all, in fact, I wouldn’t have minded more. There are some loose ends though, and I am starting to think this may be a trilogy having each guy find their own happy ending. I liked all the characters, and though this is billed as dark, I think it’s more mysterious than anything. I’ll tell you this, I need to see this Turning Series through. There are still some unanswered questions, but despite a mild cliffy, there is still a happy ending, and this can stand alone for the most part. My curiosity is too strong for that, and I will be grabbing the next on release day. (Eek! I just read the blurb for the next one! I NEEEED IT!) 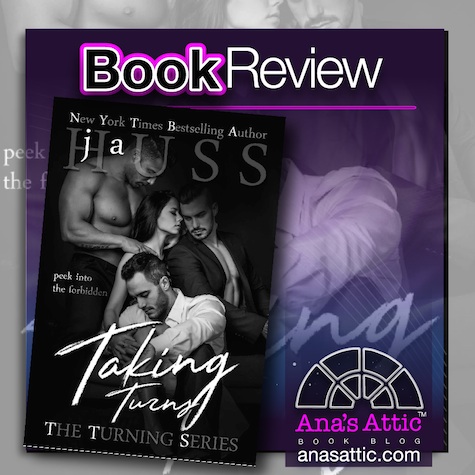