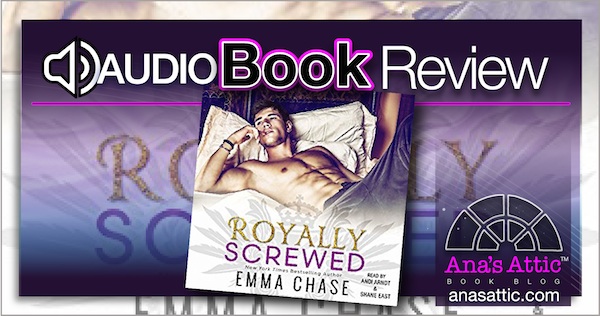 Contemporary Romance with some comedy. Stands alone. 1st in an interrelated series.

What a charming, romantic, fun, sexy fairytale! I have read all of Emma Chase’s books, and I have had at least one on my best of the year lists every year since she started. Her male POV romantic comedies, The Tangled Series, got me hooked, and she has become the queen of male POV RomComs for me. Royally Screwed is dual POV, but may still be one of my favorites.

I honestly didn’t think I would be into the royal type of storyline. I grabbed this one because of the author, and because I needed an audiobook with a different male narrator than all the other audiobooks waiting for me. I am so glad I did! It was like reading a down-to-earth fantasy with dirty sex and laugh out loud lines.

“I was known before I was born and my name will be blazoned in history long after I’m dust in the ground. Infamy is temporary, celebrity is fleeting, but royalty…royalty is forever.”

Nicholas is the Crowned Prince of Wessco. He is young. He is hot. And he is the completely responsible one. He knows he will have to take over the kingdom from his grandmother soon, and he takes the role he was born into seriously. The Royal life isn’t easy though. It’s steeped in tradition. One of these is that the Prince must marry. And she must have royal blood and be a virgin. While Nicholas may be responsible, he is still an arrogant playboy. A playboy who was just given a time limit. He has 5 months to either choose a bride himself, or one will be chosen for him. He has only until the end of summer. But first he must fly off to New York to locate his wayward younger brother.

Olivia Hammond runs a small, struggling coffee shop in New York City while taking care of her alcoholic father and younger sister. One day the handsome, very drunk, Prince Nicholas and his bodyguards stop in for some coffee. And the two have an instant spark.

“She has no idea who I am.
Her ignorance is rather…thrilling. There are no expectations, no hidden agendas, no reasons to pretend – what she sees is what she gets. And all she sees is me.”

The prince drunkenly makes some suggestions to the beautiful coffee girl.

“I’m not sleeping with you for money.”
“Why not?”
“Because I’m not a prostitute.”
“Of course you’re not. But you’re young and beautiful, I’m handsome and rich. The more applicable question is why aren’t we fucking already?”
That is a strong argument.”

I loved how Olivia was cool about it. Sure, she may have pied him in the face, but she didn’t deny the attraction. When he comes back straight the next day and asks her out properly, he’s hard to say no to.

“Well, I… don’t… date.”
“Good God, why not?” I ask, horrified. “That’s a bloody sin.”
“A sin?”
“You’re stunning, obviously clever — you should date often, and preferably with a man who knows how it’s done.” I rest my palm on my chest. “Coincidentally, I happen to be fantastic at it. What are the odds?”

Even once she found out who he was, she didn’t treat him any differently. He is so used to people bowing or curtseying or doing his bidding, that she is completely refreshing. I loved how they didn’t fight the connection they had, and they quickly started and epic romance. But his being a Prince and her dating a prince has a lot more drawbacks than she ever thought. He constantly has bodyguards. Everything he does is watched and judged, and he can never just be alone.

“So you’re never just… alone? Can’t walk around naked if you feel like it?”
I imagine Fergus’s reaction to my bare balls resting on the sixteenth-century Queen Anne sofa — or even better, my grandmother’s reaction. And I laugh.
“No, I can’t. But the more important question is, do you walk around naked?”
She lifts an alluring shoulder. “Sometimes.”
“Let’s hang out at your apartment tomorrow,” I tell her with an urgent, straight face. “All day. I’ll clear my schedule.”

Haha! It was kind of fun to see him try to fit in with a normal person. Even though they fall quickly for each other, they know the time will come to an end when summer is over. The monarchy has archaic laws he is powerless to change. He must marry royal, virgin blood. But they both agree to enjoy the hell out of the 5 months they have.

Until the Prince is called back to Wessco for an emergency and will have to stay the rest of the summer. There is no way Nicholas is going to leave Olivia, so she comes too. That’s when the fact that he is a real PRINCE hits home.

“How many rooms does it have?”
“Five hundred eighty-seven, not including the staff bedrooms.” He leans up and licks the shell of my ear, making the wet and quivering plan come to fruition. His next words almost make me come on the spot. “And I want to fuck you in every one of them by the end of the summer.”

Things get real in Wessco. The parties, the snotty girls who want the prince for themselves, his grandmother, politics…being a prince isn’t all it’s cracked up to be.

Therein lies the problem. He was born to be a prince. He has no other choice except maybe to keep her as a sidepiece. But Olivia is a tough New Yorker. She would never be that. 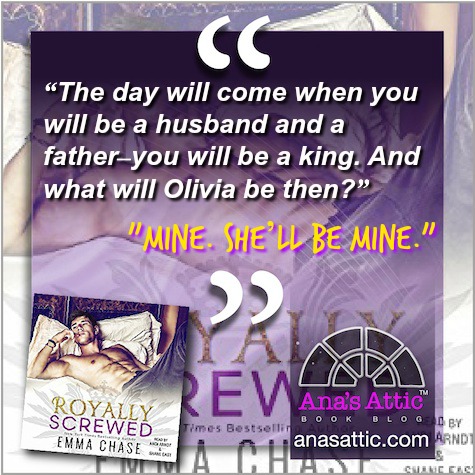 I wasn’t sure I’d like the fairytale type of Royal books that are coming out now. But let me tell you, I was wrong. I should know better, because you can never go wrong with an Emma Chase book. I have loved them all, but this may be a favorite (but I might say that after each one). Royally Screwed by Emma Chase had everything I love in a book and more. It had characters I love, a compelling story with built-in angst but not too much, a sexy alpha, hot sex, and lots of laughs. Most of all it had an epic romance. I couldn’t put it down and found myself cleaning my entire house so I wouldn’t have to stop listening (a true miracle!) I can’t wait for the next one! 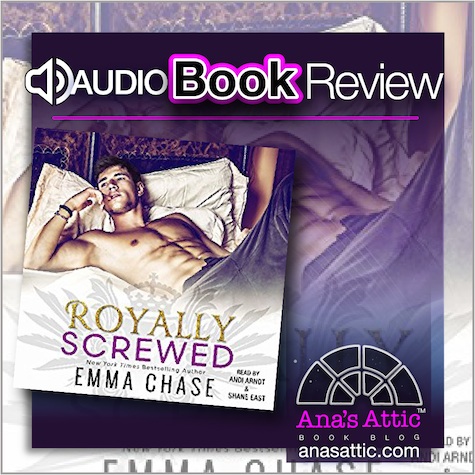