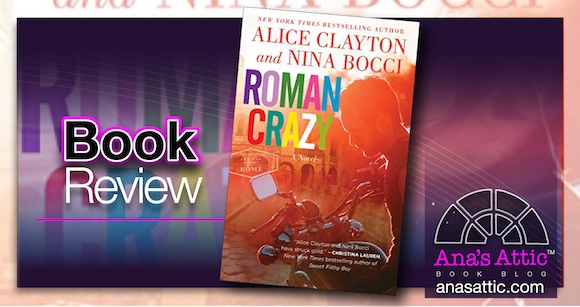 Roman Crazy by Alice Clayton and Nina Bocci was one of my most anticipated reads of the summer/fall. I love everything Alice writes, and I loved the short story I read of Nina’s. Roman Crazy was a very different read. It wasn’t just a second chance romance, it was a romance with a country, and in a way, with herself.

Let’s start from the beginning. When Avery finds her husband “putting his penis in his administrative assistant” after 8 years of marriage, she is shocked. When she noticed he was “fucking her creatively” when he hadn’t done that to her in years, she was outraged. Avery has lived her life for her husband. She has sacrificed her career, her art, and life goals to be a good wife to him. Wearing her proper pearls, and arranging charity lunches at the country club, Avery has been the model wife. So much so, that her mother-in-law, Bitsy, even tries to get her to take gifts and excuse the infidelity.

Avery’s best friend, Daisy, is working as an architect in Rome, and Avery decides a summer in Rome is the best way to leave the WASPY life behind, recover from a broken heart, and find herself. From the minute she arrives in Rome the rich descriptions of the city begin. From her descriptions of the cobblestones beneath her feet to the sights and smells, the feeling of being transported to Rome were just beginning. 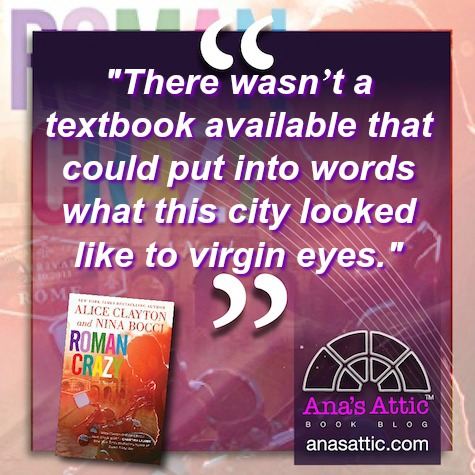 Daisy hosts a little dinner party her first night there with all of her architect-firm friends and colleagues. And when Avery walks in, she is knocked on her jet-lagged ass when she sees Marcello. THE Marcello, the guy she fell in love with while studying abroad 9 years before in Barcelona. He was even more amazingly gorgeous, and he is PISSED. They had planned a future together, and she just disappeared after returning home and going back to her boyfriend (who she married).

“Tell me what happened nine years ago, when you left to go back home and forget all about Barcelona. And me.”

Roman Crazy reads very much like an amazing travel guide to Italy. In fact, the setting was almost the main character of the book. You were able to see it all so clearly in your mind’s eye. The authors’ descriptions of the sights, sounds, smells and tastes of Rome were so rich and detailed it felt like I was there.

Avery was originally an artist. After she got married, she stopped her art, so when she arrived in Italy, she immediately picked it back up, and coincidentally (a little too coincidental) she was able to work doing what she really wanted to do with her life originally, restore frescos and other old art.

Roman Crazy, to me, was more Women’s Fiction than romance. As much as I was enjoying the story and the scenery, nothing made me desperate to pick it back up and read it until the last 15-20%. In fact, it took me 4-5 days to read because I found myself easily distracted. I loved the humor and the writing and even the story, so I couldn’t really put my finger on exactly why I wasn’t totally engrossed in Roman Crazy the way I wanted to be. 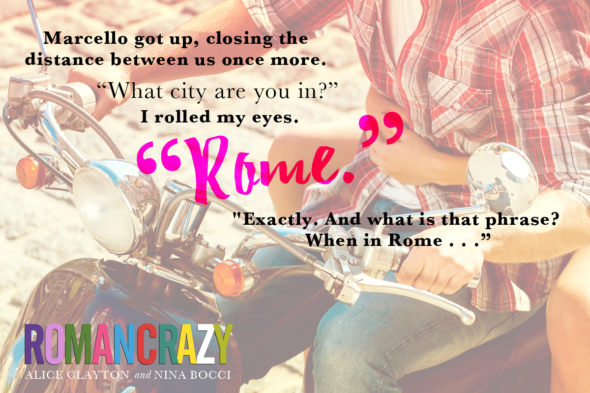 Roman Crazy was a very well written, rich story that almost transports the reader to Italy. The rich descriptions of the scenery, smells and tastes were a huge part of the book. So much so that the romance almost took a back seat. I would say that the story is much more about Avery finding herself again and finding treasures in Italy than about finding love, which was quite alright for a change. Unfortunately, I found myself easily distracted while reading it without really knowing why. It just didn’t make me breathlessly turn pages the way I wanted it to. I still read the whole book with a smile on my face, I still enjoyed the read, and now I really want to go back to Italy and see the less touristy spots.

Note: I will absolutely read any collaboration these women write again.