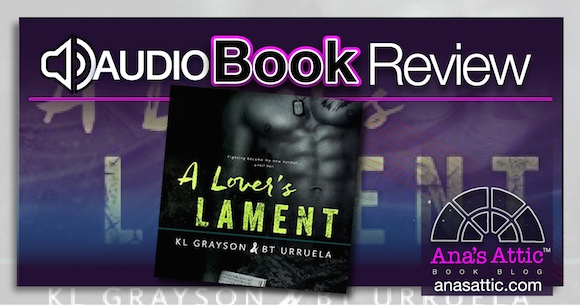 I don’t read a lot of military romances. But A Lover’s Lament by K.L. Grayson and B.T. Urruela has gotten such great ratings and has been recommended so many times, that when I saw it come out on audiobook, I was truly excited for this second chance romance. Let me tell you, A Lover’s Lament lived up to the hype.

“You’re more than my best friend—you’re it for me, Dev. You’re my soul mate. You hold my heart in your hands.”

Katie and Devin were best friends since first grade. As teens, the passion took over, and a true, life-long love was formed. Promises were made…until Devin stupidly thought disappearing the night after they finally make love would be the right thing to do. Katie had lost her best friend and love of her life, and never fully got over it.

Ten years later, tragedy strikes. Tragedy caused by a soldier. When Katie’s therapists suggests writing to a soldier through a pen pal program might help her forgive, she is shocked to see Devin’s name on the pen pal list. She didn’t even know he went into the military.

“…I have to write him, because if I don’t, I’m letting him win – I’m letting the bitterness win – and I’m tired of fucking losing.”

The beginning was a little slow and sad for me. Katie really felt bad for herself and I had just a little trouble getting to like her. But when Devin’s character came in, wow–I started to FEEL the story. Devin is a Sergeant in the U.S. Army, stationed in Iraq. He has been at this for years. He just lost his best friend to the horrible violence that never takes a break. He’s grieving, he’s lonely, he’s horny. But he’s a professional and would never let any of that get in the way of leading his men. He hasn’t spoken to Katie since he left without another word ten years before. When he gets a pen pal letter, he almost throws it out, until he sees the name on the envelope.

“Katie…my biggest regret. My only regret, actually, and one I’ve never quite gotten over.”

At first it was just letters. You were able to feel the excitement and hope coming back into both of their lives as they began to communicate. Then they stepped up to e-mails and Skype. You could feel the connection and love that never went away.

“How is it possible to feel such a strong connection with someone I haven’t even talked to in a decade?”

As their love blossoms again, so does the war. Knowing that B.T. lived through all of this made it oh so real. His descriptions were vivid to the point that you could smell the air and feel the sand. You felt his camaraderie with his unit, and I’m not sure someone else that didn’t live through it could describe it so vividly.

“No matter how this place changes me down the road, I will always be grateful for these friendships. These men are my brothers.”

Despite it being a “war story”, it is still mostly a romance. But Katie is scared. What if he leaves again? Or God forbid, something happens over there? Boy, there were some scary moments. Moments I was on the edge of my seat. Moments I was crying. Moments I was devastated.

“The unknown is scary, and there are no guarantees where war is concerned, but if there’s one thing you need to know—one thing that I want you to carry with you—it’s that I will fight like hell to make it back to you.”

But throughout the entire book, you never doubted the life-long love of Katie and Devin, and the fact that they were meant to be together. 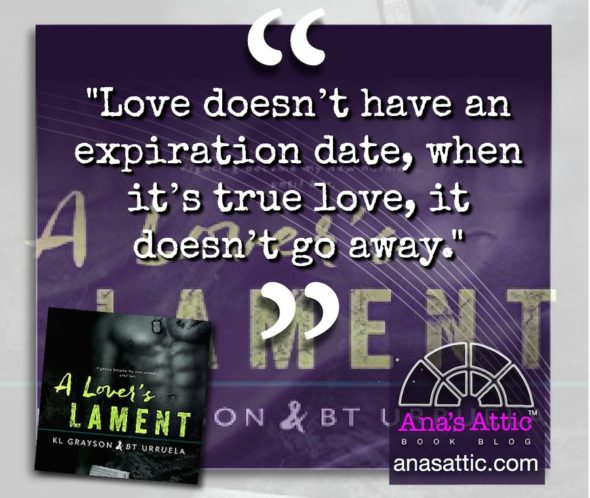 A Lover’s Lament was one of the best military romances I have read. Perhaps knowing that the author lived through this helped with the realism, but I actually felt like I was there. I loved how two people who were kind of sad and hopeless at first reconnected, and you could feel the hope and love build up again. A Lover’s Lament brought me through every emotion from sad, angry, scared, hot, happy and even made me laugh at times. The two authors worked really well together, but the male POV really brought the story to life. Though it was a little predictable and I found the pacing a little off, it was still an amazing read that I highly recommend.

Purchase A Lover’s Lament by K.L. Grayson and B.T. Urruela

Check your library here to see if you already have it and can get the $1.99 audible upgrade 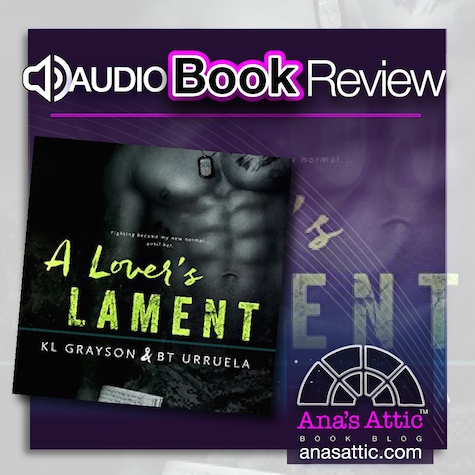