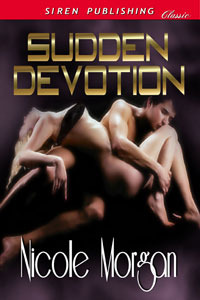 I won Sudden Devotion by Nicole Morgan at her blog during the Hot Summer Night’s Blog Hop. Not usually winning anything good, I wasn’t expecting much. I was more than pleasantly surprised. I loved this book!!!!

When it started off with a very sexy scene, I thought it was going to be one long sex scene with very little story. I was incorrect. Don’t get me wrong, there was a lot of hot sex going on, but this book had so much more!

Claudia and Mitch were a great couple you wanted to root for. Mitch is totally swoon-worthy. He was loving, patient, kinky, sweet, dominant, and he always made Sara share her thoughts, feelings and fantasies honestly with him (I really loved that). The side characters were an interesting bunch, and I liked how they were all written.

Even with the errors, I really enjoyed this book. But if you are the type that cannot deal with errors in a book, don’t read this (unless Nicole pops in and tells me the Amazon version is different **which she did!). I will absolutely look for more by this author (and just popped by her blog hoping to win again!)