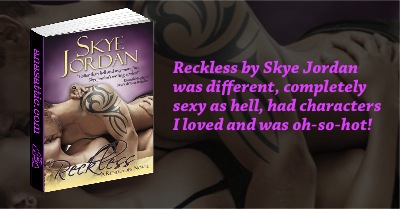 Wow. That was one hot, sexy, fun book! Reckless by Skye Jordan was a perfect blend of hot sex (really hot sex), interesting story, and great banter. I love a book with great banter…and this time it’s via text! Even more fun! I tend to love books that have texting or facebooking in it. It’s so true to life nowadays.

Jax is an ex-actor turned hollywood stuntman. All manly-man and rugged, he’s tired of the gorgeous women he’s gone out with using him to get a part. He’s jaded and pissed off after his last ‘girlfriend’ sold him out to get a part. Lexi is a haute couture wedding dress designer for the hollywood elite. She has worked her fingers to the bone to get where she is, including a few years of modeling.  She doesn’t have time for men, but even more important…her career depends on a squeaky clean reputation. She can’t associate with bad boys.

But when she sees Jax get out of his friend’s car at the airport, with his longish black hair, a few days of scruff, and the sexiest designer black motorcycle jacket Lexi has ever seen…well…

Lexi’s friend Rubi (loved her!) is a software developer who gave Lexi an app to try out in the airport. She was able to find out the phone number of anyone she pointed the phone at. Well, even though she didn’t want to get involved with anyone, she decided a little anonymous flirting with the hot and sexy biker boy  while she was waiting for her plane might be fun.

They were immediately flirting via text. I sat there during this whole part with a stupid grin on my face. How fun is that? She is flirting with him, can watch him, he is flirting back but has no idea with whom. He just knows that all the women in the terminal are fairly attractive, but it could be any one of them. They chat back and forth for a while, and he keeps begging to see her. But when he reveals he’s a hollywood stuntman, she also realizes he has real potential to mess up her career. But the texting still ramps up to sexting, because the attraction was more than obvious, even via text.

JAX: I like the fiery, fast sex so passionate your vision blurs.

JAX: I like wild, frantic, have-to-have-you sex that burns you alive.

JAX: I like deep, driving sex where sweat drips off my chin, rolls down your spine, and tickles the dip between your ass cheeks.

JAX: I like the kind of sex that includes sliding my tongue into all your very tight spaces.

JAX: I like any kind of sex that drives animalistic sounds from your throat.

They continue (after Jax has a short nap and fuckhot dream) to chat over the plane’s internet throughout the flight. Jax still doesn’t know who she is. They decide to meet for some hot real-life sexing. But Lexi insists he keeps the lights off when they meet…so he still doesn’t see her. The only problem is…they took the red-eye, and he has to head to work. But before he does:

“I’m going to ease your ache, Lexi.” He bit her earlobe gently. Soothed the spot with his lips.
“But I don’t have a lot of time, so tell me what kind of release you want?”
Hard and fast? Fast and deep?

“I’m going to do it all again tonight” -another beat- “with my mouth.” He pressed his lips to the space just below her ear, then whispered, “But when I’m inside you, you’re going to come so hard you scream.” 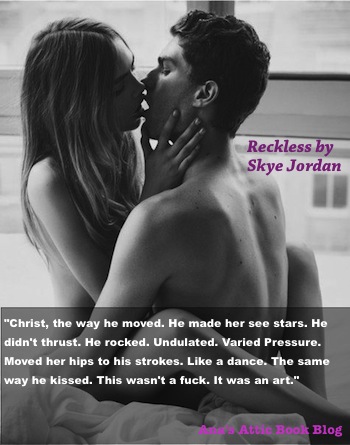 Holy fuckballs, this was one HOT book! There wasn’t just some sex, there was a LOT of sex! And it was the good kind! Why? Because Jax was:

Even though he still hadn’t seen her, Jax knew he wanted more. There was a definite connection between these two. But Lexi was warned to watch out for the company she keeps. The partnership she was competing for was watching her every move.  She had no idea that he was an ex actor in the upper echelons of Hollywood.

“She was delicious. Completely, radically luscious. And he wanted more. More than just sex, more than just tonight…..”

Reckless by Skye Jordan was different, completely sexy as hell, had characters I loved and was oh-so-hot! I will read any book she releases, and I’m so excited to see there will be more in this series. (Don’t worry, this stands alone). The only reason it wasn’t a full 5 star read for me was there was almost too much sex (WTF? Did I just write that?) compared to story. This is one book I’d actually love to read again (Mr. Ana would like that too!), and I would like to know the characters a little more outside the bedroom too.

“Yes, I want to keep you more than I want to breathe.” 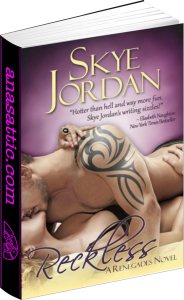