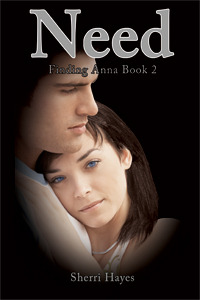 Need (Finding Anna, Book 2) by Sherri Hayes was provided to me as an arc from Net Galley. Luckily, I was able to read it directly after Slave left off with a cliffhanger. I wish I can say the same for book 3. I can’t wait!

In Need, Stephan realizes that he has fallen in love with Brianna, and she realizes she is not his slave and doesn’t have to stay. But Brianna is so broken, she can’t even leave the apartment by herself without having a panic attack. Stephan is wonderful and patient, and despite being a Dom, he pushes Brianna without ever pushing her beyond her limits.

Stephan works very hard at making Brianna more independent and comfortable around people, and gains her trust 100%. Brianna becomes highly dependent on Stephan and wants so much to please him, but doesn’t think she can. Stephan takes so much time and is so patient with her that when they finally do make love it is sweet, loving, and they both clearly enjoy it.

Yes, Stephan is clearly a Dom. He punishes her for not communicating with him, not by beating her, but in more subtle ways. He is very much in charge without needing to prove it physically (yet). Clearly Brianna needs this kind of control, because she is not able to function on her own. Stephan gains more power over her by being her emotional crutch, and the only person who can bring her out of one of her flashback/panic attacks. It seems as if she is weak. But she isn’t. Brianna is so strong. She is basically a child, but has been through so much. The fact that she wants so much to work at it and make Stephan proud proves how strong she is.

Need was a beautiful continuation of the story that began in Slave. I enjoyed all of the characters, and I am hoping upon hope that Ian gets in some major trouble, and Stephan and Brianna are able to be a happy, stable couple. Though this supposedly began as Twilight fanfic, I see NO similarities as the books have continued. This is a slow read, there is no heart-palpatating excitement, but it is satisfying (except for the cliffhanger). I can’t wait until the next, and wish I knew when to expect it!

You have ONE DAY LEFT to take advantage of some AM