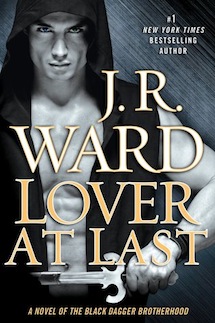 I would like to start this review by saying I am a HUGE Black Dagger Brotherhood fan. I have loved this series from the start, and couldn’t wait to get my hands on Lover at Last, Blay and Quinn’s story, and the 11th in the series. I usually do a re-read of  the previous book with this series, but I decided not to with all the books on my TBR list. So at first, I blamed my difficulty with this book on my not doing the re-read. I was also reading this while prepping to go on vacation for 2 weeks, so then I blamed my difficulty on that. Then, when Lover at Last took me well over a week to finish (it may have been 10 days!), and the next book I read took 2 days, I realized it was this book, not me.

This is the first Black Dagger Brotherhood book that I spent the entire book, right up to the end, wishing I could read it faster and get to the next book. At 609 pages, this felt like the never-ending book to me. As soon as I would start to get into it, the chapter would end and another chapter with different characters and a different storyline would start.

Different characters is the operative word. This was not Quinn and Blay’s book. It was Layla’s book. It was X’cor’s book. It was some dude named Assail (I could barely place him) and Sola’s book. It was was even Trez’s book, and Wrath and Beth’s. So many side stories with new characters more than old ones that you want to re-visit. This whole book felt like a set-up for the next 5 in the series.

And the brotherhood slang–it annoyed the crap out of me. I found myself rolling my eyes reading that these “old world” vampires and even their women talk like what a white woman thinks people in the hood talk like. The silly names and some of the language always got to me a bit, but in this book everyone’s inner voice had the ‘hood’ sound.

My usual review style, including retelling of the blurb in my own words and including numerous quotes and gifs aren’t working for this review. Why? Because there are too many story lines. Because I’m crushed. I wanted to love it, but I didn’t. I found myself liking it at a few parts, and loving a scene at the very end, but it took almost 10 days to get there.

Blay, Quinn and John Matthew were always the three musketeers. We had John Matthew’s POV in many books. But in Lover at Last, John Matthew barely even appeared. I felt his point of view could have added so much to so many aspects of the book, but he was just a non-entity.

I’m going to go through some of the basic stories and my thoughts here:

I have loved this series all the way through. It is one of my favorite all-time series. but Lover at Last just didn’t hold my interest. After taking almost 10 days to read, and wishing it would end so I could get to a book I love, I’m not sure I am willing to continue the series. Especially at the price point it is at now (though it is currently $5.00 less than when it was originally released). There were parts I loved, but there weren’t enough of those to save the book for me.

I did something I rarely do with this review. I quickly peaked at goodreads before writing my review. I wanted to see if I was crazy in the way that I felt. The reviews are all over the place, with some saying it was the best BDB book yet, but many more having some issues with it, though perhaps not as much as me. There were a good number though who rated it low despite loving the others, so I felt a little less crazy.