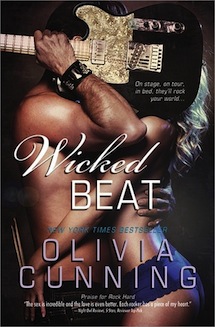 If anyone asks me what is the sexiest series I could recommend, I would definitely say the Sinners on Tour Series by Olivia Cunning. It has great story, fun banter, deep romance, and a huge variety of all kinds of kinky sex. Each book features a different band member. Unfortunately, the series was released by the publisher out of order. Wicked Beat is the last book to be released in the series, but 4th (out of 5) in the reading order.

Olivia Cunning started me reading erotica as a genre with Backstage Pass (Sinners on Tour 1). No matter how jaded I get from reading tons of other sexy rock star books, no series compares to this. (See my favorite Rock Star/Famous Character Books here). All of the books in the series have a surprisingly large amount of story along with the tons of creative, kinky but not gross sex.

Eric Sticks is the drummer for the Sinners, and he was always into watching the other guys (HOT!) while they got it on. In Wicked Beat, Eric finally gets his own girl, and we find out why he usually only watches. 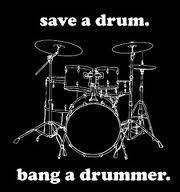 Rebekah is Dave’s little sister. Dave is the FOH (the head sound guy) for the band, and was paralyzed in a bus accident months before. Rebekah has a degree in audio engineering, but this is her first professional gig. She has done lots of other odd jobs, including a mechanic. So she has a spunky, tomboy personality, with bleach blond hair with a blue under layer. Eric has matching hair, and they hit it off immediately. But Rebekah only has eyes for Trey, like all of the other girls. Eric knows he can’t compete, and never really tried before, but Rebekah is different.

He wanted her. Rebekah. Wanted to watch her touch herself again. Damn, that had been so hot. He’d seen a lot of things in his day, well, mostly his nights, but watching Rebekah pleasure herself had turned him on like nothing in his experience. He didn’t only want to watch her though. He wanted to touch her. Kiss her. Taste her. Smell her. Hold her. Laugh with her. Cry with her. He wanted her. And she wanted Trey. Everyone wanted fucking Trey.

At first, she only wants Trey. Then she starts seeing Eric in a new light, and starts thinking she might want BOTH of them.

“She wanted Trey to slide his cock up her ass and Eric’s to plunge upward into her hot, achy pussy. Thrusting into her. Together. (Holy fuck, I’m getting hot typing this!) It wasn’t that idea that made her stop them, but the thought that they’d find out. That they’d know. Know she wasn’t whole anymore.”

Rebekah needed to feel desired. After a life-altering tragedy happened to her, her ex made her feel as undesirable as possible for two years. But as much as she wanted Trey, it was Eric that caused a physical reaction. Well, Trey and Eric together at one point…hang on, I have to cool down again….

Trey’s a good guy though…he knew Eric wanted her and helped him out, and Rebekah starts to realize that Eric’s the one she really wants. When she does, it’s awesome. They are perfect together, especially how she helps him solve his ‘problem’. These two had such a healthy, creative, fun sex life! They role played, used costumes, toys, and switched out who was in charge. There was a TON of sex in this book, but the story wasn’t really sacrificed for the sex. 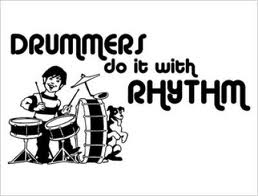 Olivia is one of the few authors I have found that can incorporate totally hot sex into almost the whole book without going overboard, and story is never sacrificed. We got to learn more about Eric and his awful background. He turned out pretty great considering. I love reading about how music saved him, and as a mom of two musicians who were heavily influenced by early school music programs, I appreciated reading this.

Once Rebekah got over her Trey obsession and we learned more about what happened to her, I really liked her. One thing REALLY bothered me though. I hated the way she behaved with her ex, and how she never thought about how it would make Eric feel. Her mother was also a she-bitch from hell!

My favorite thing about the Sinners series is that they are all fun to read. Olivia Cunning writes great witty banter between the bandmates, and in this installment, Rebekah and Eric also had a lot of fun dialogue together. Eric was so honest and up-front about everything, and his love and connection to Rebekah was so pure and strong it was a joy to read.

“You know I think your outer package is perfect,” he said, “but what’s beautiful about you is in here.” He pressed the fingertips of one hand to the center of her chest over her aching heart. He moved his other hand to the side of her head. “What’s sexy is in here.” He kissed her forehead, her temple. “I said I’d love you forever, baby. That doesn’t mean I abandon you when you’re sick. If you’re too tired to get out of bed, I’ll carry you. If your hair falls out, I’ll…” He grabbed the long strand of purple resting against his collarbone. “I’ll cut this off and tape it to your forehead.”

This wasn’t my favorite of the Sinners books, but saying that, I still totally loved every second of it. I would have read it in one sitting, but well….ya know. You kind of have to take breaks when reading Olivia’s books, and if your guy isn’t around, make sure BOB is. (Or order BOB here)

See the Sinners on Tour Series order with purchase links and review links.

***Once this was pointed out to me by Ricki, I can’t get it out of my head. WHY is there a couple with a GUITAR on the cover of Eric STICKS, the DRUMMER’S book?