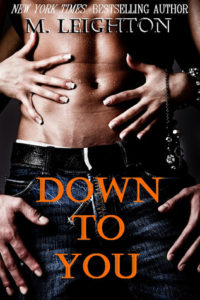 HOT & SEXY TWINS!!!!!! How can you not want to read a book starring not one, but TWO gorgeous, sexy twin brothers and one girl who must choose between them? I’m not sure I would have been able to choose either. Down To You by M. Leighton is a sexy, light, surprising, funny, hot, romantic read, and I loved every bit of it.

Olivia is living with her bitchy cousin, while trying to finish her degree. While out at a party with some friends she meets, and instantly connects with bad-boy Cash Davenport. He is everything she is attracted to in a guy, and the charge is electric. But he is also everything Olivia knows she should stay far away from. She has had enough of the motorcycle riding bad boy.

The next day Olivia sees the guy in her kitchen with her cousin (who is “…..the triple-S trifecta- spoiled, snobby and snide.“) But it’s not really him, it’s his gorgeous, perfect, almost-a-lawyer twin brother, Nash Davenport, her cousin’s boyfriend. The problem is, Nash and Olivia instantly connect as well.

“If I ever become a thief, Nash will be the first thing I steal.”

The sexual tension Olivia had with both guys was off-the-charts.

I know I’m staring, but I can’t seem to keep my eyes off the lips that are so close. They look so much like his brother’s. So delicious. So forbidden. And, despite all the reasons I shouldn’t, I want him to kiss me just as badly.

What the hell is wrong with me?

I hate cheaters. I don’t usually enjoy books with cheaters, but Marissa, the cousin was such a total bitch she deserved it. And there was no real two-timing or going back and forth between the two.

I also really liked Olivia, she was funny, snarky, strong, independent, and her inner voice cracked me up.

“I want to paper cut her. On every square inch of her body. And then roll her in salt water.”

Throughout the book she goes back and forth between the two brothers. Cash is everything Olivia is attracted to but she knows is bad for her: a nightclub owner who rides a motorcycle; a dangerous playboy/bad boy. But he is single. Nash is everything she knows would be good for her, a lawyer, a serious worker, but he is taken. She can’t help the pull towards both of them. And when one visits her during the night, she isn’t sure who it is! WHAT????????? Hot, awesome sex, and you don’t know which brother? Holy Crap!

And then……HOLY SHIT, hang on to your hats, you are in for a crazy twist!

This was a fun book that would have hit a 5 for me, but I felt it was a little light. If the author went a little deeper it would have totally been a 5 for me. The twists and turns were great, it was hot and sexy, funny, and left me breathless many times. The book ended with a happy for now, then the epilogue left us with a HUGE cliffhanger!