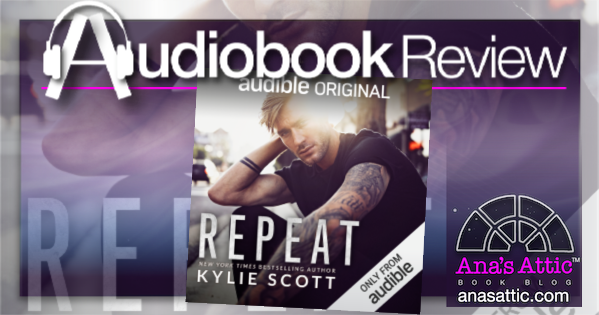 Repeat by Kylie Scott was a departure from her normal style and an interesting premise. Available audio first with Andi Arndt narrating, I couldn’t wait to listen to this. Opening with Clementine Johns, who, after a vicious attack from a mugger, has lost all personal memories, I knew I was getting into new territory for Ms. Scott. 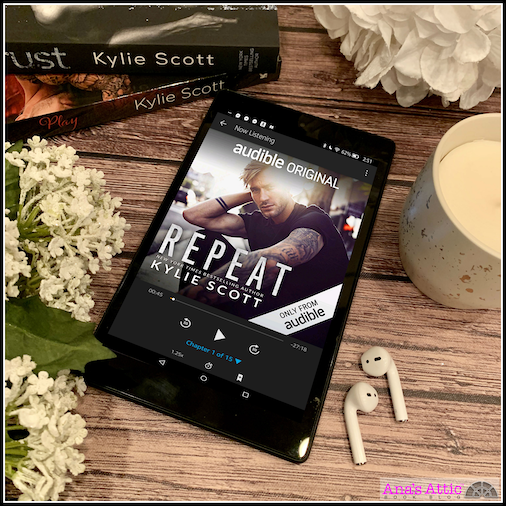 Clementine has to start over, but starting with a blank slate isn’t easy. Trying to find out more about her former self, Clem visits her ex at his tattoo shop. Apparently it was a really bad breakup, because nobody is happy to see her, and she has made a few enemies. Including, it seems, her ex-boyfriend, Ed.

Clem supposedly did a lot of damage on the way out of his life, but as readers, we are as much in the dark about it as Clementine, so we are kept on the hook, waiting to find out as Clem makes a new life and new connections with old friends and lovers.

“I want to blend in, watch and learn. Because if we’re the sum of our experiences, then I’m nothing and no one.”

Though Clementine’s sister has been taking care of her, not knowing anything about her life and still having side effects from her injuries, Clem really shouldn’t be left alone, especially since it seems there may be some danger in store for her. So Ed, her ex, steps in to help and protect.

“A part of me misses him. A big part of me. Or maybe it’s just the idea of him, since it’s hard to miss something you have no actual memories of.”

Having no memory changes you. How can you still be angry at someone who really isn’t there anymore? But forgiving the person who destroyed you just a month before isn’t easy either. Though she may not remember, everyone else does.

I really enjoyed watching this couple make their way back to each other, and at the same time start a new relationship, because she isn’t the same person; it was a very interesting and creative premise. But something was missing for me. I almost felt like I was dropped in the middle and maybe would have connected better if I saw them together before the breakup.

There was some suspense that kept me interested and not wanting to put it down, but I was left a bit confused about the outcome, and when a book is in audio only, it’s way harder to go back and re-read something. I was never able to locate the spot that confused me to re-listen. Despite that, I still very much enjoyed the listen.

You can never go wrong with Andi Arndt, and I think she was perfect for the role.

Repeat by Kylie Scott wasn’t really what I was expecting after reading many of her other books. It’s a bit of a darker theme with some suspense to keep you involved. I was hooked from beginning to end, but never found myself loving Clementine, perhaps because nobody else did at first. I warmed up to her as the story went on, but never loved her. There was great chemistry between the hero and heroine, and it was very interesting to see them forge a new love while they stepped over the landmines of the past. I wish there was a little more of Kylie’s banter and humor to lighten this up a bit, and I was left a bit confused about a pretty big plot point, but I still very much enjoyed the listen, and when the book releases in April, I will be grabbing it to figure out what I missed.

*Free in the Audible Romance Package* 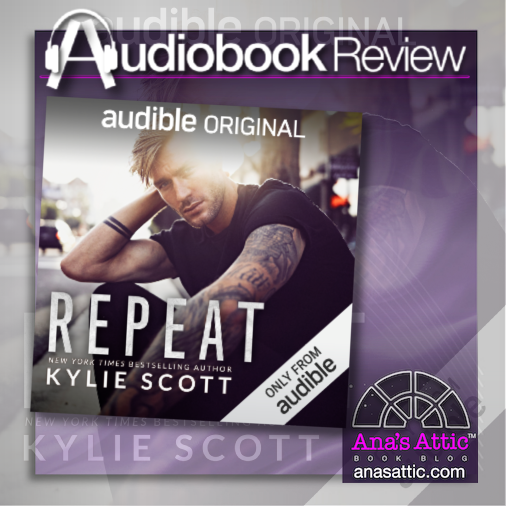