“The man was big. I don’t mean tall …but large. Broad shoulders, muscular arms with tattooed tribal cuffs around his wrists and biceps. I’d bet I couldn’t put my two hands around those arms, and thick thighs I wanted to squeeze…and maybe lick.”

That pretty much says “read me”, doesn’t it? I saw hot, alpha, tattooed biker on my goodreads newsfeed, and I didn’t even have to think twice, didn’t read anymore, just knew I had to get my hands on Reaper’s Property by Joanna Wylde. And I’m so glad I did! Whew! What a ride…a yummy, delicious, big, badass HOT ride!

Marie has just left her abusive husband and moved into her stoner brother’s single wide trailer, when 3 badass bikers come to call on her brother. Though she had a purely sexual reaction to one (see above), they also scared the crap out of her. Marie knows nothing about Motorcycle Clubs, not even what MC is. Despite her fear…she couldn’t help her reaction to the big one.

He snagged my hand, leading me to the table. My heart raced with every step. I had no idea what was about to happen, but part of me really wanted him to touch me.
Maybe.
Probably Not.
Shit. 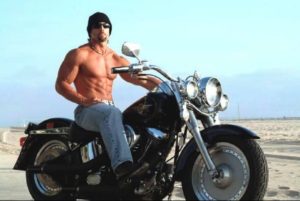 “So why are you called Horse?” “’Cause I’m hung like one,” he replied, smirking.”

They come back for business with her brother a few times…she cooks for them, and gets to know Horse a little better. The electricity between them is hot, there is no denying the pull. But Marie is hesitant. She doesn’t want to be a “property of”, but Horse will do anything he can to get his hands on her. And as much as she doesn’t want that, she just couldn’t resist him physically. But she wasn’t ready to be “his”. But when her brother fucks up, she runs out of options.

“This is your option,” Horse said to me abruptly. “You want to keep dumbass alive, pack a bag and climb on my bike when we leave. You do what I tell you, when I tell you, no questions and no bitching.”
“Why?” I asked blankly.
“So you can cook dessert for me,” he snapped.
“Why the hell do you think?” he said, voice strained. “So I can fuck you.”

As much as she wanted Horse, she wasn’t really given a choice. He was crude, she had no understanding of the 1% MC lifestyle, and really was scared to become “sweet butt” (community pussy).

But she had no other option.

And there was no way he was going to share her, or let her go….and she didn’t want him to.

“I want this,” he said softly, leaning over and kissing me between the shoulder blades. “I need to own you. All of you. Make you scream and realize that you belong to me and I belong to you and nothing else matters. I can’t let you slip away from me, babe.”

“I’m not gonna let you go, Marie. I’m keeping you and I don’t care if I go to hell for doing it. I don’t care about anything but fucking you.”

“Fuck, this is gonna piss you off and then you aren’t gonna let me stick my d*ck in you,” he muttered.

In the beginning of this book, I couldn’t help but compare it to two other MC books that were on my Best of 2012 list. But in the end, Reaper’s Property gained a life of it’s own and I was hooked. Lock, stock and barrel. I’m so glad to see Joanna Wylde will be writing more in the Reapers MC series, because I’d love to read about some of the other characters we read about. If you love the outlaw biker books with hot, sexy, dangerous bad boys, you won’t go wrong with this one!

“Someday,” he whispered softly in my ear. “I don’t want to hurt you. Not until you’re ready for me… But someday I’m going to own all of you, Marie. You’re all mine, babe. Knew it the first time I saw you. Couldn’t give you up if I tried.”