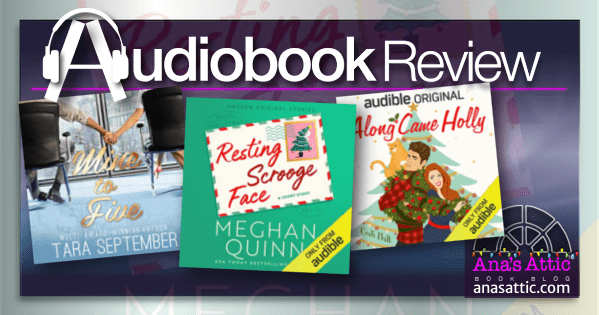 Mine To Five by Tara September, Resting Scrooge Face by Meghan Quinn, Along Came Holly by Codi Hall

Mine to Five by Tara September

Mine to Five by Tara September is a romance that takes place during the holidays rather than an all out holiday romance, so it can be read any time of year.

When Melanie’s boyfriend of two years cheats on her, she has an evening out with tequila and a hot sexy stranger she meets at the bar. As soon as she complained that it was the night before she started a new job, I knew the rest of the story…Her drunk hookup is her new boss. They work in advertising, and I enjoyed that part because it was my major and my career for 25 years.

Mine to Five was 3rd person, and that held me back from fully connecting. Verla Bond, the narrator, sounded very robotic to me and her male and female voices were a bit too similar. I’m not sure if this was the writing or the narrator, but there was a lack of contractions, which is partly why it felt so robotic. “She had” vs “she’d” or “you will” instead of “you’ll”, etc.

I still enjoyed the story and characters, especially the meddling moms. I think I would have enjoyed this more if I read it rather than listened.

Purchase Mine To Five by Tara September

Resting Scrooge Face by Meghan Quinn is really short, at 1 hour and 42 minutes. I wish it was longer! Meghan Quinn rarely disappoints me and I was so happy that even though I wanted more, she told a very full story in that short time. During the Holidays, a nice short one is great with all the running around we do.

Caleb broke Nola’s heart when he wouldn’t leave his small town to join her in NYC. Now she’s back in Bright Harbor, and doing anything she can to avoid him, including developing a pen pal relationship with a fellow Christmas hater.

I love books where the relationship happens over text, mail or email, and I really enjoyed the back and forth between “Resting Scrooge Face” and “Ho Ho No”. In such a short time, the story was a little superficial, but I enjoyed every second.

The Narration was also spot-on. This was a clean romance, a rarity from Meghan Quinn.

The book and audiobook are both FREE in Kindle Unlimited

Along Came Holly by Codi Hall

I read There’s Something About Merry last year and I probably should have read my review before committing to another 9.5 hour read. But I gave it a chance and liked the premise: A Christmas lover has a store next to a scrooge, and they prank each other at first. I love a good grumpy/sunshine book, so I decided to put up with the narration.

The male narrator, Skyler Hutchinson, sounds like he’s always yelling, especially when he does the MC’s voice, though he is better at others. Neither narrator really helped the story at all, and honestly, I think he very much detracted from the story, because I had a hard time getting past the narration to try to enjoy the story.

Told in 3rd person, Along Came Holly would have been fine as a novella, but there wasn’t enough meat in this story to fill 9.5 hours. I just never got over not liking Declan, both from his grumpiness and his voice. This one wasn’t the best listen for me though the story wasn’t that bad.

Free with Audible Plus

Series Order (They can each stand alone): Nick and Noel’s Christmas Playlist | There’s Something About Merry | Along Came Holly 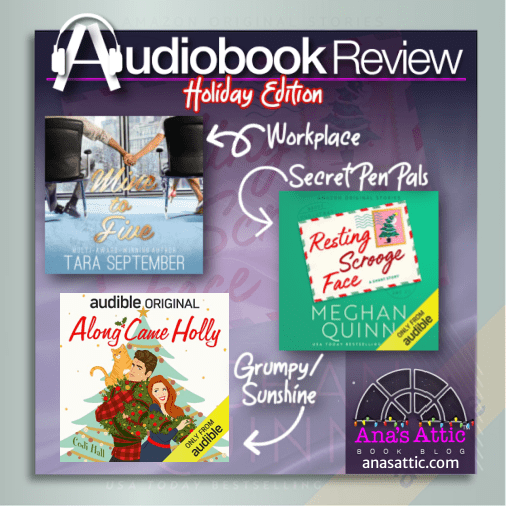