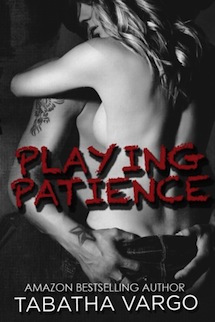 “There’s a place you land, right before you hit rock bottom, a sort of cushion before the blow…..Zeke was that place for me. He was like a rainbow in my black and white movie, a soothing touch against jagged scars”.

Holy moly, these dark, fucked up books get me every time. Playing Patience was the completely unputdownable story of 2 of the most broken young teens I have read about.  But oh, it was so friggin’ good! I have pages of awesome quotes, and a bunch that pissed me off like you wouldn’t believe. But that’s the thing, it brought out some major emotions in me.

Zeke lives with his drunk, abusive father in a falling-apart trailer. His mother died of cancer years before, and he spends most of his time getting high and practicing with his band for his weekend performances at the local underground club. He’s known for his bad temper, and has been getting in fights for years, so nobody suspects a thing when he shows up beaten and bruised time and time again.

Patience is the pretty, shy, platinum-haired soccer star, 17 year old daughter of the Governor. Despite her wealth, her life is so, so much worse than Zeke’s. She stays to protect her younger sister from the same horrible fate she has endured for years.

“I was a broken porcelain doll, cracked beyond repair and tossed in the back of a closet.”

Still, she doesn’t belong on the other side of town, at an underground club. Her friend Megan was hot for Zeke’s drummer, so Patience tagged along. She spots Zeke on stage and has never found herself drawn to someone like that before.

“He was covered in color and art; he was a standing statue for freedom, and I was drawn to his careless stature.”

She soon finds herself drugged and passing out in the bathroom, where Zeke comes across her, and risks himself to save her.

“She reminded me of a tiny snowflake fairy.”

But Zeke is a dick. He’s lived a hard life already, and hangs around a really bad crowd. They treat women like objects, and the fact that  women throw themselves at them doesn’t help. But there is something else, something good lurking behind the asshole facade, and Patience sees it.

“Being around Zeke was like watching a movie on a broken TV and having the screen blink on and off. Every now and again, I got to see brief flickers of the real him and I had to admit, I really liked those brief moments. More than I should.”

Patience doesn’t get close to anyone. She doesn’t let anyone touch her, but as she gets to know Zeke, that changes. Zeke is a man-whore. He is used to getting girls immediately. Patience may never get to that point.

“I wanted things from him that made my stomach flutter and turn at the same time, but wanting and doing were two different things.”

They know they should stay away from each other, but they can’t.

“She belonged in the light and I was right where I was meant to be – stuck in a dark, dank gymnasium”

“…staying away from him was the best thing I could do, but I couldn’t. I loved the color he brought to my life. In the moments when life sucked away all of my oxygen, he swooped in and helped me breathe. He was practically a stranger, a bad boy from the wrong side of town, but in some bizarre way he helped me survive.”

There was no insta-love, “everything is all better” in this book, but there was a romance with a happy ending. I really felt I connected and fell for both horribly broken characters, “Snowflake” was, despite her horrible situation, good–deep down to the core. I felt so deeply for her and wished there was some way I can crawl in the book and help her.

Zeke, despite his dickish behavior became quite the hero to me. Apart, these two characters were like two broken pieces, completely hopeless. Yet together they became whole.

Tabatha Vargo has written a beautiful book. The rating is based on how I felt as I read it. If I go back and start getting picky about certain things, I could lower it’s rating. But I have to say, my initial reaction was “this was one of the best books I’ve read this year”. This book had me breathless and completely engrossed the whole way through. It was gut-wrenching and addictive. If you liked books like Hopeless, Sea of Tranquility, and Falling Into You and Nets and Lies, you will love Playing Patience by Tabatha Vargo.

“Years of shadows and darkness were erased in that very moment. I held my source of freedom in my arms and I could already feel the heat from her light against my skin.” – Zeke