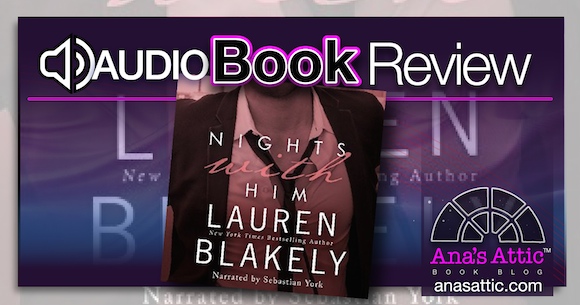 Nights With Him (Seductive Nights: Michelle and Jack)

Lauren Blakely has jumped up into my top favorite author group with Nights With Him. Adding the delicious Sebastian York narrating a book that’s already hot as hell? OMG, explosive! (I mean that literally. Mr. Ana and I had a very busy few days thanks to Lauren). Though this is the fourth in the Seductive Nights series, It totally stood alone, and I never felt as if I wished I read the 3 preceding books. This was about a totally different couple.

Jack Sullivan…me likey! He is a dirty-talking, dominant CEO of an upscale sex toy company, Joy Delivered. After a horrible ending to his last relationship, Jack has major commitment issues. So much that his sister makes an appointment with a therapist for him who specializes in sex and love.

Jack is out having a drink to forget his pain and loneliness, when he sees Michelle Milo walk in the bar in sexy business attire. She’s his perfect fantasy, and they have a night of passionate sex. Michelle has been in love with a guy for 10 years that does not share her feelings, and she is in no way ready to pine over another guy, so a one night stand is all she wants too. But wow, it was GOOD.

When Jack shows up the next morning at his therapy appointment, guess who it was with? Yup, Michelle Milo. She quickly introduced him to, and turned his case over to a colleague, so sorry, nothing taboo here. Jack knew he didn’t have nearly enough of her yet. So now that they each know who the other is, Jack has a proposal.

“Let me have more of you, ” he continued. “Let me have you for a month. Give me your body. I’ll give you mine.”
“I don’t know.”
“Let me give you a taste of what I can do to you. If I don’t give you the best orgasm of your life within the next hour, I won’t ask again.”
“Check, please.”

I loved that Michelle wasn’t uptight, she was a dirty girl, totally willing to do any dirty thing Jack wanted. And yum, he was a dirty boy!

“He dropped to his knees, pushed up her skirt, and spread her legs open. “I have unfinished business with your pussy,” he growled, as he dragged a finger across the outside of her panties.”

Remember, Jack has a fancy sex toy company, so lots of lelo-like toys come into play, and I want them all! Holy cow, did I say the sex was hot? I mean HOT. Some of the best I’ve read! But there was more…there was such PASSION!

“He went down on her like a man obsessed. As if he wanted to drink her in, to lap her up, to consume her.”

Considering the amount of sex in the book, I was very pleasantly surprised to find that it balanced well, and the characters were very fleshed out. The story itself was a little deeper than I first thought, and I totally ate it up.

Nights with Him by Lauren Blakely was one of the hottest books I’ve read this year, but I also loved the characters and story. It was sexy, romantic, fun, panty-melting hot, and the narrator is to die for. I was so glad that Nights with Him stood so well alone, I never felt like I missed anything by not reading the first three.

Purchase Nights With Him by Lauren Blakely 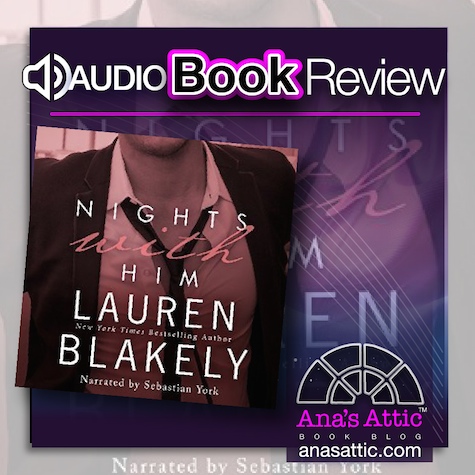