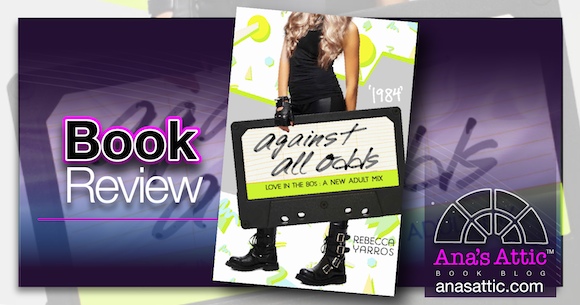 1984 – Against All Odds by Rebecca Yarros

I have been eyeing these 1980s books for a while now. This is a novella series by different authors, each taking place during a year of the 80’s, and each named for a song of the same year. When I saw 1984 – Against All Odds written by Rebecca Yarros, I had to grab it.

I was a teenager in the 80s and couldn’t wait to kind of relive my childhood through a book. Sadly, on that point, this book totally missed the mark. It almost felt like it was an already written book, adjusted to fit the 80s theme. Add in a couple of acid washed jeans and MTVs, a mention of Cyndi Lauper and it’s now an 80s book.

But the book itself, for such a short one, was a great second chance love/rockstar book. Hawke is the lead guitarist for The Birds of Prey who formed at their performing arts High School but was now a big time rock band. His high school love, Sabrina “Brie” Caroline is the “pop princess”. She’s also the girl who got away. She left him so he could freely pursue his career without a jealous girlfriend keeping him down.

She also left because her mother was as anti-rock star as you could get. Her mom was also a controlling overbearing manager that made her daughter call her by her first name.

“Did she have to control everything? Then again, I’d created my own monster when I signed away my freedom, opting for a big paycheck and bigger fame to save Mom’s house. Bye-bye Julliard and hello… whatever this is.”

Sabrina was a product. She wanted to do acoustic versions of songs she wrote, but was instead forced to do the synthesized pop songs about nothing. She was backed into a corner even more when she had to take a year off to recover from a “broken leg”-code word for Social Anxiety.

I loved that this story really addressed anxiety in a realistic way. It talked about her medication and therapy, and how hard it most be for a star to have social anxiety.

Social Phobia, that’s what the doctor had told us, and he wasn’t the first.
Bullshit, was Mom’s reply as usual. What kind of pop star has a fear of her own fans?

When both Birds of Prey and Sabrina both make it into MTV’s first Top 20 Countown, Sabrina and Hawke meet again after years, on air.

He’d become everything I’d preemptively left him because of.
I ripped my eyes away from Hawke and focused on Matt, willing my heart to calm, my brain to stop the flashbacks of our greatest moments, my soul to stop screaming for him before everyone else heard what my body couldn’t contain. Three years had changed everything about us except my reaction to him.

When the two are forced to write a song together, the old feelings can’t be denied. Neither can old hurts.

“Those few minutes had only clarified two things— I was still pissed at her for the way she’d walked out, and I still wanted her more than my next breath. Fuck.”

Could they make it together with her reputation intact? Can she get out from her label’s expectations? It’s a good story, and you’ll have to find out yourself. 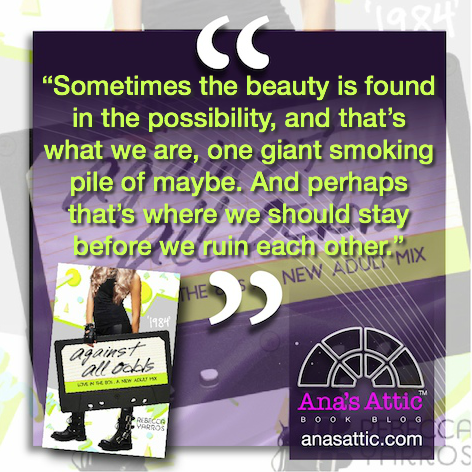 I was a little disappointed in 1984- Against All Odds by Rebecca Yarros. Not in the writing (which was great), or even the story, but more because I was really looking for a good 80’s story, and this could have taken place now outside of a few references. I loved that social anxiety played a major part in the story and was written about in a very knowledgable way. I actually really enjoyed the story, but minus the social anxiety, I have basically read this story before…a few times. Even the twist is the same as the last rock star book I read. Still, I enjoyed the quick read, and rock star or second chance lovers will enjoy it.

Purchase 1984 – Against All Odds by Rebecca Yarros 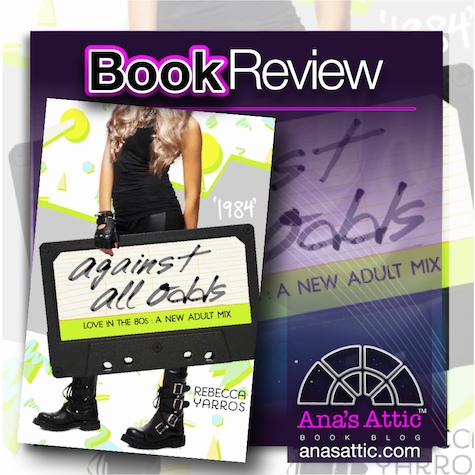