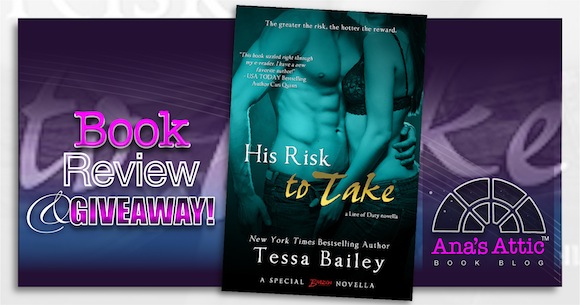 His Risk To Take (Line of Duty #2) by Tessa Bailey

I grabbed His Risk to Take (Line of Duty Series #2) by Tessa Bailey for a quick read the day before I left for Book Bash. I was hoping to finish this quickie before the 3 hour drive with the audiobook of Officer off Limits, the next one in this series.  I didn’t finish in time and hoped I wouldn’t have any spoilers listening to the next. That’s when I realized how loosely connected these books are. In fact, you don’t have to read them in order.

Normally I need to review a book right away because there honestly isn’t room in my head for so many alpha males, my memory sucks. But this one packed a little punch I guess, because I remember it well! (I know, it’s only 2 weeks, but I can’t for the life of me remember the details on the other book I read that week and have to re-read to review).

Troy Bennet is a cop who just moved from Chicago to NYPD after his partner was killed taking a risk during a raid. He is not very lucky in love because:

“He’d tried once or twice to be the guy who whispered sweet nothings into a girl’s ear when she came, but he’d never been able to keep up the façade. He’s rather be explaining in very explicit terms how and where he planned to take her next. It was part of him he couldn’t explain, but had learned to embrace. Finding women to embrace it with him tended to be the difficult part.”

He’s the new guy hanging out with the other cops at a bar when SHE walks in. Ruby Elliott, a gorgeous brunette with a yoga mat who puts her name on the board for the next pool game. She sees Troy watching her and goes for it.

“So, blue eyes. Why don’t you stop staring and buy me a drink? I don’t want to dehydrate before you work up the nerve.”

Troy likes her feistiness, and the nerve she has being a pool shark, but he still lets her know who is really in charge.

“Next time you bend over a table, I’m going to wrap all that hair around my fist and pull your head back. I want to watch your eyes glaze over when I fuck you into oblivion.”

She may have grown up rough, doing a rough job, but Troy doesn’t put up with that crap.

“You might get away with running that smart mouth to other people. But you won’t get away with it here. If you continue to challenge me with every word out of your mouth, I will fuck you repeatedly until you learn to play nice.”

Though this is a quick read, I think there was a lot of story here. I wish it were a little longer. Ruby and Troy not only have hot chemistry, but a dangerous criminal case in common too. So really His Risk To Take had all the good stuff packed into a 120 page book. I had a TON of alpha-male, dirty talking quotes highlighted. I swear, if I just gave Mr. Ana all the highlights on my Kindle and had him read them to me? I’d be all over him.

“If you want to be touched, you tell me where, and I’ll take care of it. I’m the only on who touches you now, Ruby. ME.”

If you like sexy, dominating, dirty talking heroes, His Risk to Take is a perfect sexy, quick read. The whole Line of Duty Series by Tessa Bailey is a delicious quick little snack between bigger bites. I’m so mad at myself for waiting so long to read this series! It’s right up my alley with all of my favorite things: Banter, hot sex, dirty talking alphas and some action. If they were a little longer and first person, these would be perfect reads for me.

Purchase His Risk To Take (99¢ at time of posting)

November was a fantastic month for romance book an

Have you made any of the recipes in the Dream Bite