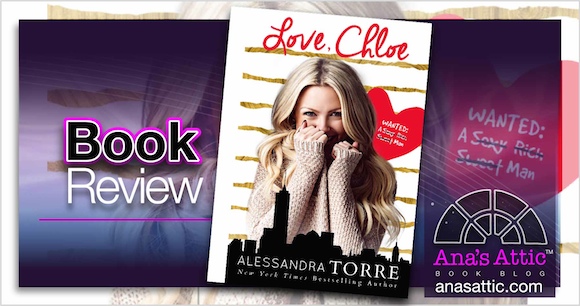 If you like Sex In The City, you will enjoy Love, Chloe by Alessandra Torre. It was a refreshing, fun and modern combination of chick-lit and romance and I enjoyed the whole thing. I knew just from the chapter names that I would like this book (there are 99 chapters!)

Chloe starts off not very likable. She is a spoiled little rich girl, or at least she was–before all of her family’s assets are frozen by the government. Apparently her parents didn’t get rich in a legal way. So she is homeless, jobless, and can’t even pick up her NYU degree because they won’t release it until her debts are paid. To add insult to injury, she is heartbroken after catching her boyfriend of three years doing the maid.

I very quickly warmed up to Chloe and her friends. She was very lucky they let her crash there while searching for a job. Her parents, sadly, were only good to her with money. Without it, they didn’t seem to care what happened to Chloe. So she was truly on her own. Without proof of a degree, the only half decent job she can get is working for a crazy New York condom heiress/actress as her personal assistant/dog sitter.

Chloe is a New York City girl through and through. But there are two sides to New York, and Chloe had to move from one to the other. She finally realizes it when for the first time, she has to attend a gala event through the service entrance.

“The wealthy of the city lived in a different bubble than the rest of us. One where there were no worries of minor problems, the majority of which were easily solved by money. One comprised of beautiful women, powerful men, the drug of success heavy in the air, punctuated with diamond, caviar, and ego. For the first time, I was an outsider, the Brantley’s car driving down the back alley of the hotel.”

Love, Chloe was more about Chloe finding herself than a romance. Yes, there is a great romance, but I think the book is more about Chloe’s growth as a person, about her finding out who she really is without the money and privilege.

Maybe the cultured, confident woman I was before was just a product of my parents’ money. Maybe now, with my new life a train wreck, I would discover the real Chloe Madison.

The actual romance didn’t begin until about halfway through, and for a while, I wasn’t even sure who the love interest would be.

“Miss Madison?” His voice was gruff and sexual, the drawl you wanted to hear right before he bit your earlobe, the rasp that, should he moan your name, would combust your panties.”

By the end of the book, I LOVED Chloe. Her growth was great and I loved that she never took help or handouts after growing up with everything handed to her. She made it on her own, and found her own morals and values along the way. 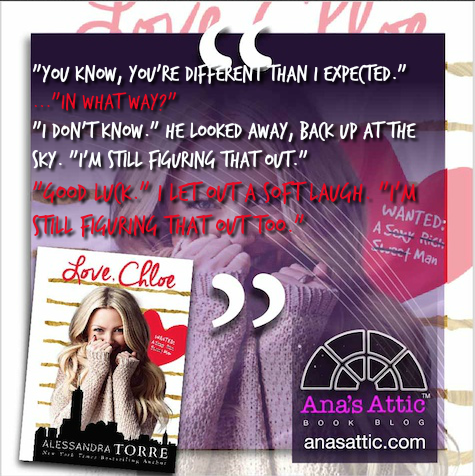 I didn’t find out until the end that Love, Chloe actually began as a weekly blog serial for Cosmopolitan. You would never know, the flow was great. I would classify this book as a chick-lit romance, because it is more about Chloe finding her true self than the romance. The romantic story was my favorite part, and it didn’t begin until about halfway, but once it did, that’s when I went from enjoying the book to loving it, yet that part moved just a bit too quickly for me. I wanted more! I enjoyed the trendy instagram posts and absolutely loved the epilogue. All in all, a fun, unique, light read! 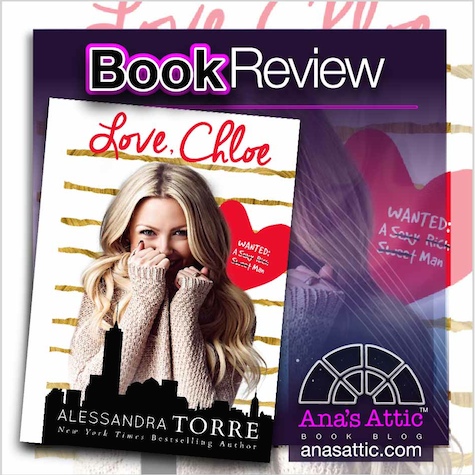