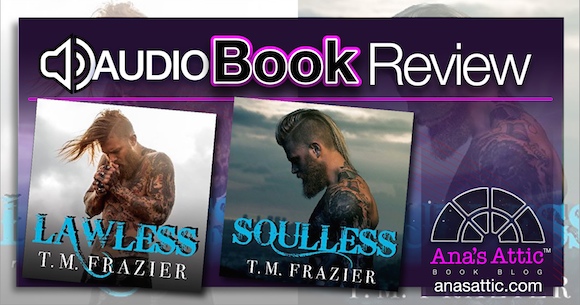 Lawless and Soulless by T.M. Frazier Narrated by Rob Shapiro and Molly Glenmore

Recommended to read after King & Tyrant

I loved King & Tyrant on audio. But I knew early on that Lawless did not stand alone, so I waited until I could listen to both Lawless and Soulless in a row. I am SO GLAD I DID! OMG, I would have died waiting! I am also glad I took a break between Tyrant and Lawless, because with the same narrators, I may have confused the characters.

Because this wasn’t King’s book, it was Bear’s. And although it is about a different couple than the first two, I would totally recommend you start with King. I had a little crush on Bear right from the beginning of King. Bear is King’s best friend and has had a brutal life. Kicked out of the MC he was born into, losing a best friend and being tortured hasn’t helped him lighten up, that’s for sure. Bear is back and he’s as mean as King was.

Thia is only 18, but she has had to become a full grownup at a very young age. When she is struck by yet another tragedy, she goes looking for the man who made a promise to her when she was just a little girl. He told her if she was ever in trouble to find him. What she found when she went looking for Bear was really hard to read (or listen to, in my case). I sobbed while I was driving.

This series is gritty and brutal, and TM Frazier pushes all the boundaries. I never know what to expect with her. But I can tell you, along with the brutality came a love (and lust) from a couple that was destined for each other.

Yum, Bear was very possessive of Ti the second he laid his eyes on her.

“I wanted to possess her. Own her. CLAIM her.”

“Because I’m not stopping at kissing. I’m not stopping until you’re mine in every fucking way. I’ll try not to hurt you, but this is happening right now. I’m warning you that I want you so much, my version of gentle still might be really fucking hard.”

Ti and Bear have both had some really messed up lives, but together, they just worked. 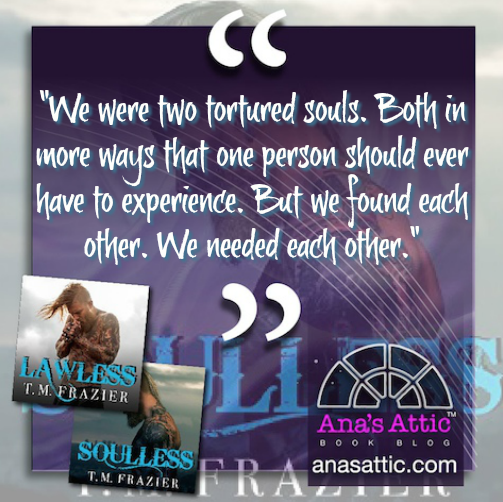 Lawless had so much happening. It was a fast moving, unputdownable rollercoaster. And at the end, you have no choice but to read Soulless immediately.

I am not going to even give away anything about the storyline of Soulless, but know that I cringed, I had to hold on, I needed tissues, and there was always surprises. But through it all was LOVE. The obsessive, possessive love between Bear and Thia,  and even more so, the brotherhood and friendship between King and Bear and the gone-but-not-really-gone Preppy who provides the comedy relief. Grace provided a welcome bit of softness to the gritty story, and I absolutely loved her.

Oh, just hearing him growl that “Mine” on audio is awesome.

Though I’m not really a “dark romance” reader, I’m not sure I consider this series dark, or more brutal and gritty. It is bloody, violent, suspenseful, emotional, intense and totally sexy. But is is filled with such intense love, it jumps off the pages (or out of the speakers in my case). I am totally hooked on these characters and on TM Frazier’s writing. It’s amazing how these characters can do the worst things ever, yet Ms. Frazier makes us love them and root for them. This has become one of my favorite series. I can’t recommend it highly enough! 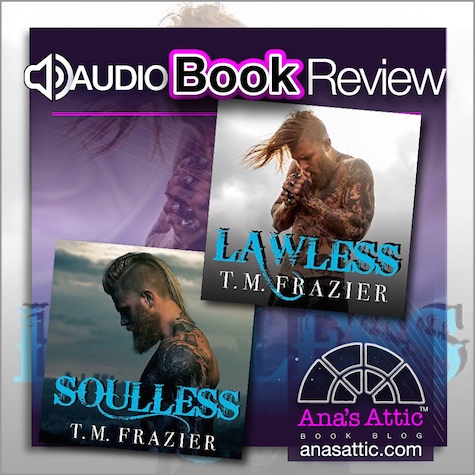