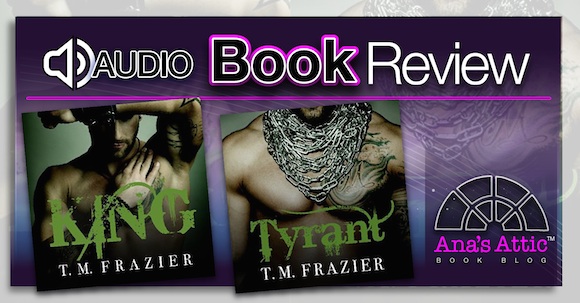 King and Tyrant by T.M. Frazier

I am not usually a very dark reader, but I don’t mind gritty. I had heard that T.M. Frazier wrote dark romances and I was always a little scared to pick them up even though everyone raved about them. But King and Tyrant seem to be the 2015 books of the year. I mean I have seen so many people say it was their best read of 2015, so at the beginning of December I noticed it on audio. *click*! Done.

Rob Shapiro, the male narrator was amazing with a sexy deep voice, and Molly Glenmore was great for Doe.  This was a good example of narrators enhancing a book.

Doe is homeless, hungry and desperate. After being found in a dumpster, covered in blood with no memory of who she was or if she had a family or home, for months Doe (from Jane Doe) has lived on the streets. Desperate for food, yet trying to remain true to the girl she might have been before, scared to live because living might mess up the life of the girl she once was.  Hooking up with another girl, an addict, she is given the secret to surviving the streets. Find a nice biker to take care of you.

I don’t know where I came from.
I don’t know how old I am.
I don’t know my real name.
All I had in the world was reflected back at me in the bathroom mirror of that gas station, and I had no fucking clue who she was.

Brantley King. A tattoo artist and lifelong criminal, he has just been released from 3 years in prison, and is given a welcome home gift in the form of a waif thin young girl.

“I don’t give a shit.” He said with a deep chuckle. “As a matter of fact, I’m hoping you are illegal.” He pressed his forearms against the wall on both sides of my head, caging me in with his massive frame., pressing his erection up against my stomach. “Cause I do illegal real fucking well.”

Although Doe was scared as hell on the inside, but she was feisty and strong, no matter how scary King was.

He expected me to cower.

“I don’t give a fuck who you are, asshole.” I seethed. “And you’re not as smart as you seem to think you are. Tell me something, who exactly was it who appointed you judge of all people?”

I thought my words would start an all out war but instead King didn’t look angrier, he only looked mildly amused. “Well you are partially right. Because when it comes to me and mine, I am the judge. I am the jury. And if need be, I am the motherfucking executioner.”

Warning: You will not like King at the beginning. He takes some time to warm up to, but I promise, he is worth the wait! In fact for him, Doe is too, because while King “owned” Doe, he didn’t take what he wanted right away. He wanted to wait until she begged him for it.

“I didn’t know whether I wanted to kill her of fuck her. Maybe both. But one thing was for sure; one way or another, I was going to make her scream.”

King’s friends Preppy and Bear were amazing side characters. Preppy is one of my favorite book characters ever. He was the comedy relief to what was a pretty dark book. And the friendship and loyalty they showed to each other made you really see the good in each of them.

The relationship between King and Doe (“Pup”) took time to develop. There was plenty of hatred and fear, but there was also a compelling love story that developed from his possession.

King filled me so completely. Not just my body. My heart. My soul. My life. I didn’t give a shit if I ever got my memory back. Because with King, I knew exactly who I was. 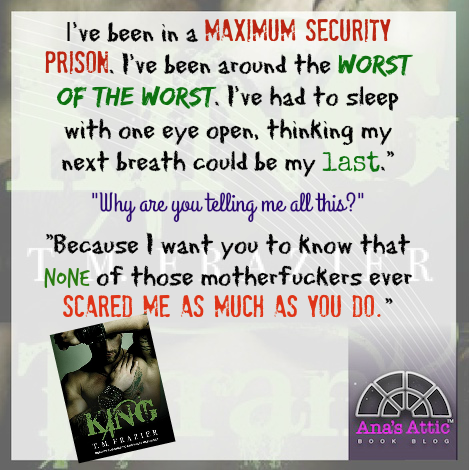 I’m reviewing these two books as one because they need to be read together. there are SO MANY twists and turns you will want to remember the details from one to the other. And that cliffhanger! OMG! I couldn’t click download fast enough.

I don’t want to spoil anything, so if you have not read King at all, there may be some very minor spoilers, but nothing more than the blurb reveals.

So much violence. So much love. So many questions answered! Secrets and truths are revealed, and they are worse than you thought. We finally learn the real identity of Doe, but can she go home again? She is not the same person she was when she left.

“I never expected to fall in love with King. My captor, my tormentor, my lover, my friend, my world”.

While King was dark, Tyrant is WAY darker. But so engrossing! My heart was in my chest, I was emotional, I was on the edge of my seat. Secrets are revealed, the lies come out. Who do you trust?

“Oh, Pup. I’m pretty sure even death couldn’t keep me from you.”

The intense connection that King and Pup had was so strong in Tyrant, that through all the action, that was the core of it. When I listen to audiobooks, I usually do other things (usually my sale list) but during Tyrant, it needed all of my attention. I literally stood in my living room with my jaw dropped…listening. 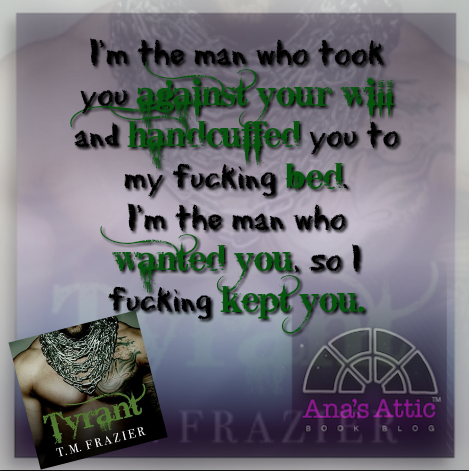 I enjoyed Tyrant a little more than King. King was almost a really long setup for the action packed rollercoaster that was Tyrant. It was everything everyone said it would be. I was so scared to read the series because I am not a lover of dark, but I do love gritty, and King and Tyrant have that in spades. I am mad at myself for waiting so long to read these books, because they were 2 of the best I read all year and I’m so glad I finished in 2015 so I could add them to my best of the year list. The audiobook narrators were fabulous, and added to the book. In fact, it was the first time I listened to an audiobook where I couldn’t even do anything at the same time. Dark, emotional, gritty, compelling, exciting, heartbreaking, and romantic, King and Tyrant had it all. I can’t wait for the next two!

Also available as a box set at Amazon 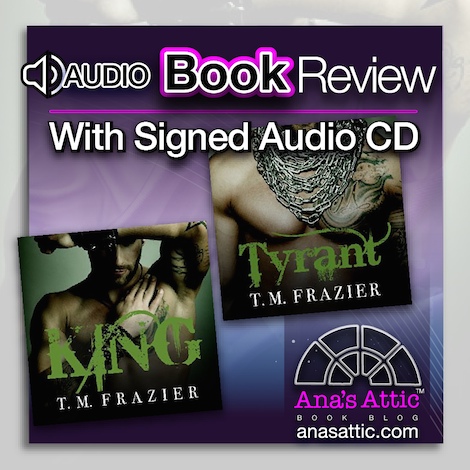